Today, we arrive in Agra which is no doubt going to be the highlight of this trip! As soon as I get off the train, I can already tell that this city is a lot less hectic and intense. The hotel is quite nice too, and we have a chance to freshen up before we explore the magnificent sights. My stomach is still acting up, and during breakfast I experience the most excruciating pain. I almost think I’m having a heart attack. Luckily, Sophie is a nurse so she gives me a few antacids. And I have a banana lassi, which is said to help settle the stomach. It does feel a bit better, but unfortunately I am uncomfortable for the rest of the day. 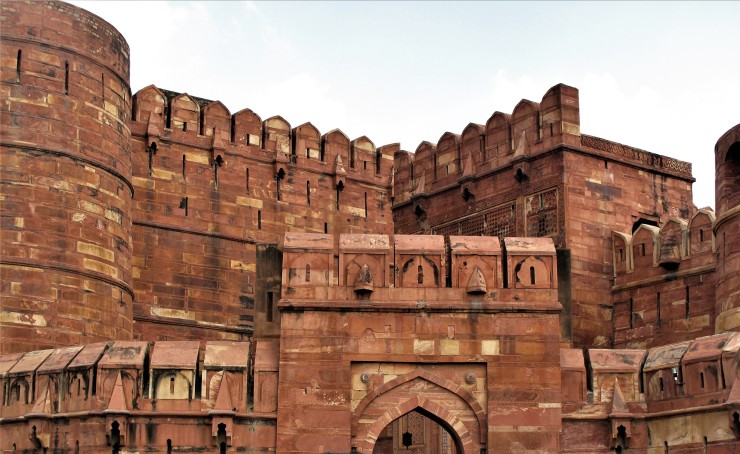 The first stop is Agra Fort. It is basically a walled city where the Mughal emperors lived until they moved to Delhi. Walking up to the Amar Singh gate, the 70 foot red sandstone walls make you feel so small.

Inside there are many palaces, mosques and halls. Chandra guides us around the fort, so we can learn some of the history of this UNESCO World Heritage Site. First a look at Jahangiri Mahal, one of the most important palaces that housed the royal women, mostly Emperor Akbar’s wives. 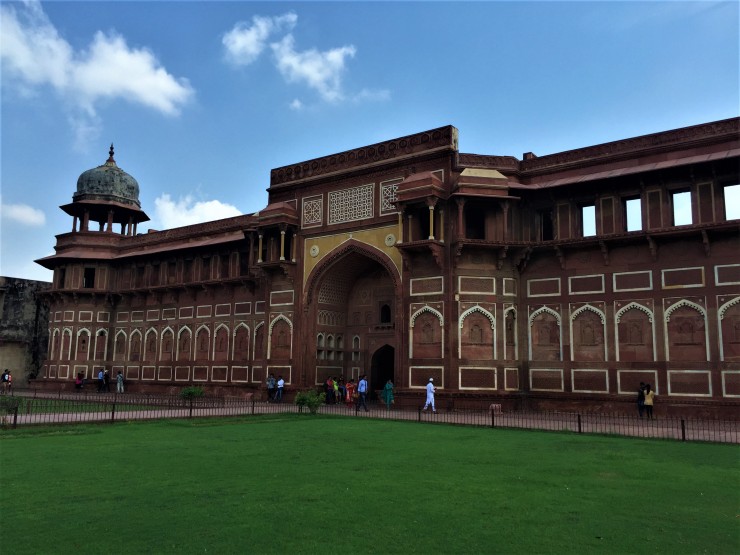 While we are admiring the beauty of the palace, we are surrounded by crazy chipmunks.  They are clearly looking for a treat, and seem quite tame. One of them even tries to climb up John’s leg! 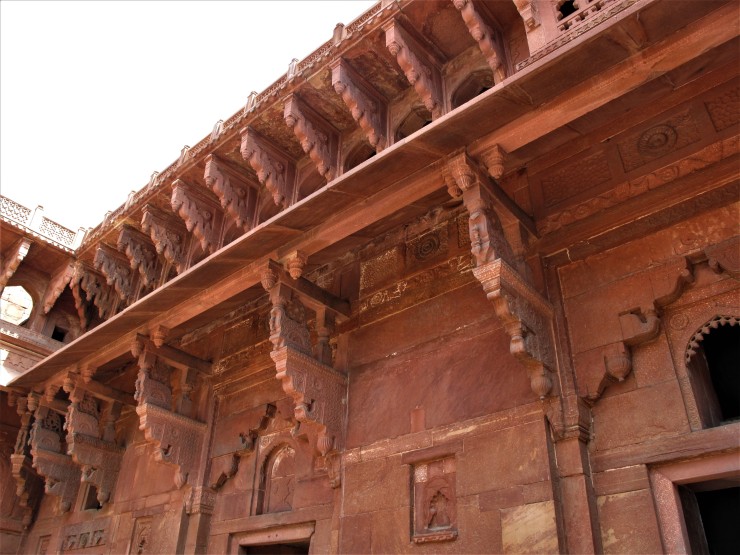 Inside, the designs and details on the walls are stunning Hindu/Central Asian architecture. It is very hot today and the sun is blazing down on us, so luckily there are many shady places to hide away while we explore.

If you look through one of the many windows, you can see the Taj Mahal in the distance. I don’t really want to look, because that will spoil the magic of when I’m standing in front of it later this afternoon! But curiosity gets me, and I steal a quick peek and pic. 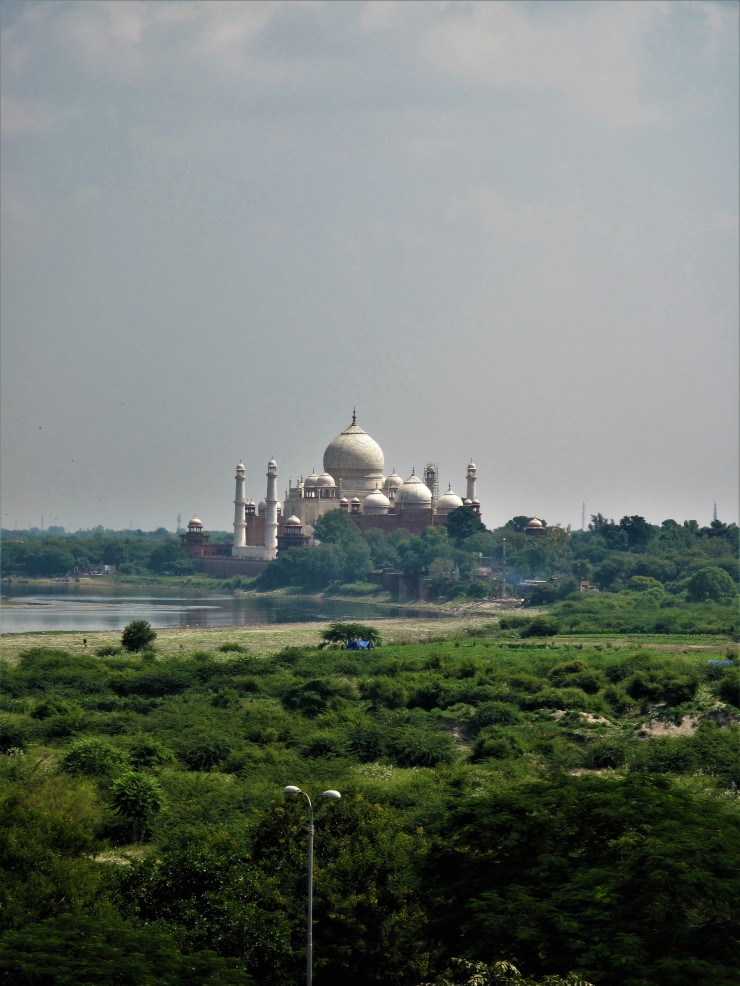 And then on to the next site…Anguri Bagh, or garden of grapes which is a private garden for the ladies. There is a large fountain in the center, and from there the garden is divided out into patterns.

It’s connected to the Khas Mahal, which was the emperor’s private residence.  The inside is carved in beautiful white marble, with mostly floral design.

Last stop is the Diwani –I –Am, the Hall of Public Audience. If you’re wondering what went on in an audience hall, it was mostly court and religious festivals, ceremonies like birthdays and weddings, and a greeting area for foreign visitors. 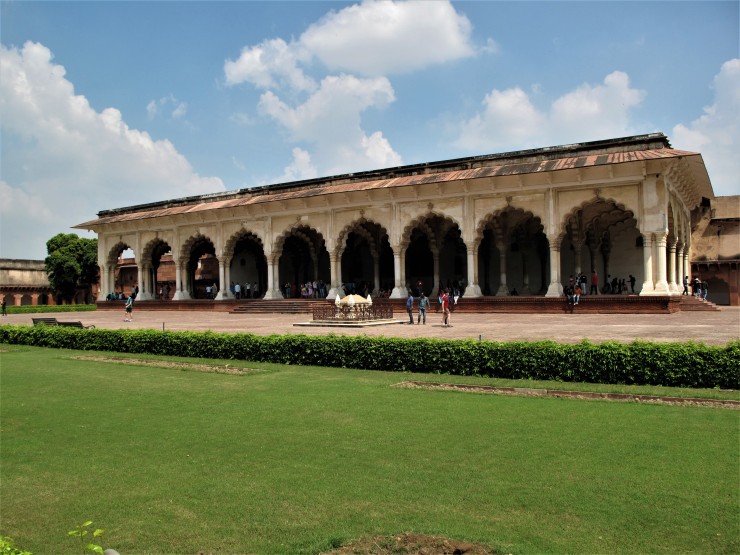 Next it is time for lunch… and despite my stomach pains, I manage to eat a yummy dish called Matar Mushroom, made also with peas in curry gravy. Then a quick stop at a carpet factory where we are shown the steps in which they are made; they really are gorgeous. 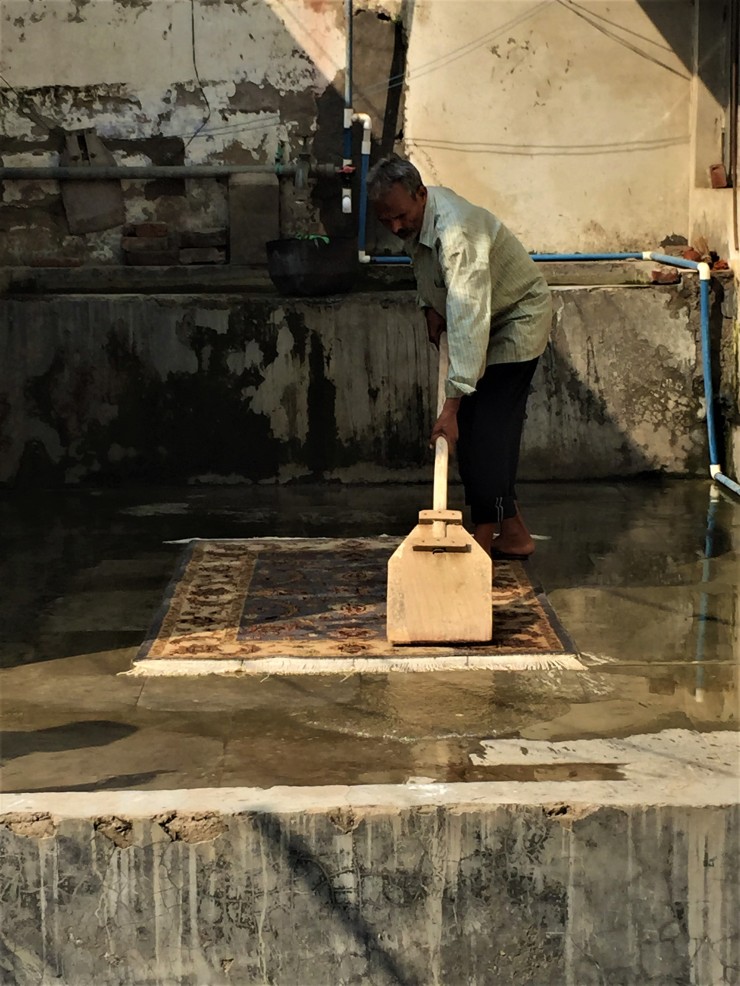 I am entranced by the man who is washing a carpet with a large wooden broom, sliding the water and soap off the carpet to remove any impurities. The vendor lays out many designs of carpets on the floor, and it is heaven to walk on them with my bare feet

I wish I had the space for one(my cats would destroy it).They are also very reasonably priced. Dammit!!