This afternoon we arrive in Jaipur, which is also known as the Pink City.  We hop into auto rickshaws, and it’s time to explore the city. According to my research Jaipur was painted pink to imitate red sandstone like other Mughal cities, and to welcome the Prince of Wales. Today, the buildings of the city have faded to a darker almost orange/dark pink color. 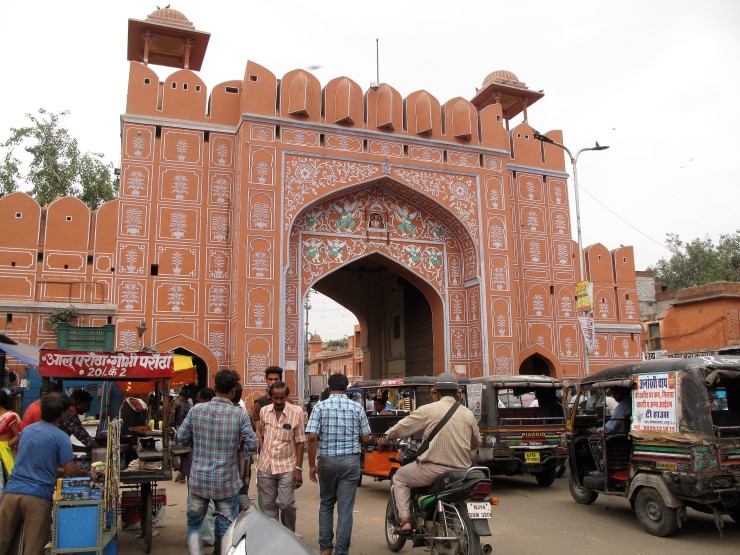 Chandra takes us on a walking tour, but honestly, walking in a straight line or semi circles, dodging all types of traffic is not my idea of a walking tour of the city. It is called walking to our destination. There isn’t anything we stop to see, and as I’ve mentioned before…it’s hard to take in any sights when you’re concentrating on not getting run over by something and not losing the group. My impression so far of Jaipur is similar to other Indian cities. A lot of chaos and noise, but the pink buildings give it a more charming feel. On the agenda tonight is attending a Bollywood movie. I am pretty excited, because I’ve heard this is quite an experience. The locals will shout out, clap, sing, etc during the movie and I really want to see a cool Bollywood dance routine. 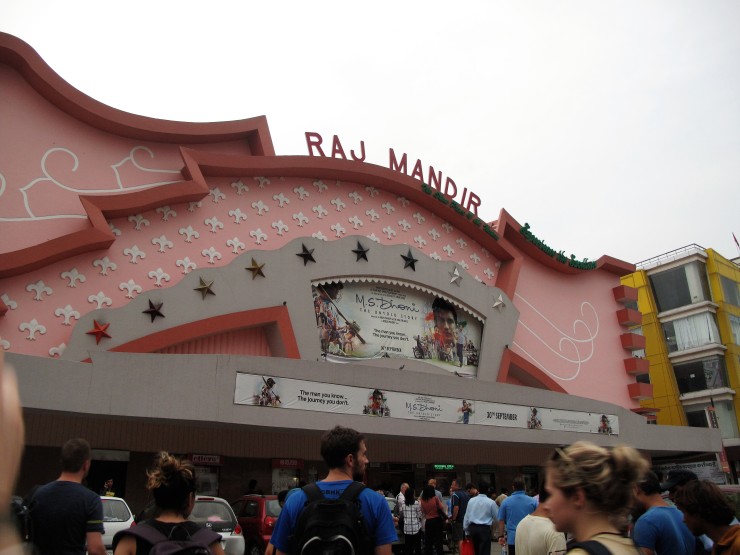 This theatre, Raj Mandir has this reputation but tonight it is pretty empty and the patrons are mostly tourists. Outside of the theatre, our group gets instant celebrity status. Posing for pics again. The movie is called M.S. Dhoni: The Untold Story.  It’s a biopic about the Indian cricketer and his rise to success as one of the most famous players in India. The movie is in Hindi with no subtitles, but some scenes are in English. I could get the basic plot of the movie but at intermission, Chandra fills us in on what is happening. Yes there’s an intermission. The movie is 3 hours long. And no Bollywood dance numbers. Overall, a cool thing to check out and I did enjoy the movie. After, we have a late dinner and I decide to order the carbonara pasta, thinking it will be easy on my stomach (the pain is mostly gone, but my appetite is still meh). It is SO damn spicy and not at all what traditional carbonara pasta is. I can barely eat half of it. So frustrating!

The next morning we head back into the old town of Jaipur, through the pink gates of the walled city. First stop is Hawa Mahal, also known as the Palace of Winds. 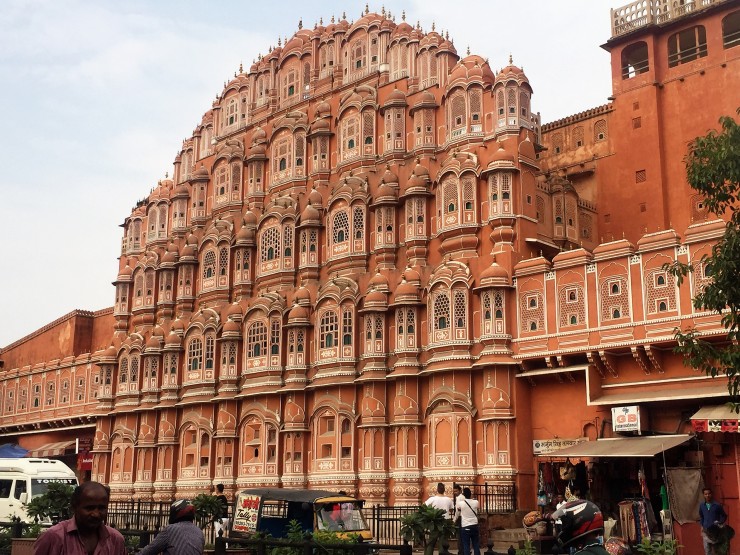 It is a very unique/odd looking work of architecture, resembling a red/pink honeycomb and has 953 windows overlooking the street. The idea behind this was to allow the royal ladies to observe everyday life of the streets of Jaipur, without being seen. The design also allows cool air to wave through the pattern, providing air conditioning! Fun Fact: it is the tallest building in the world built without a foundation. It does not topple over because of its curved shape. This is definitely one of those attractions that you can’t stop looking at, or taking pictures of.

Next stop is Amber Fort and Palace (pronounced Amer). 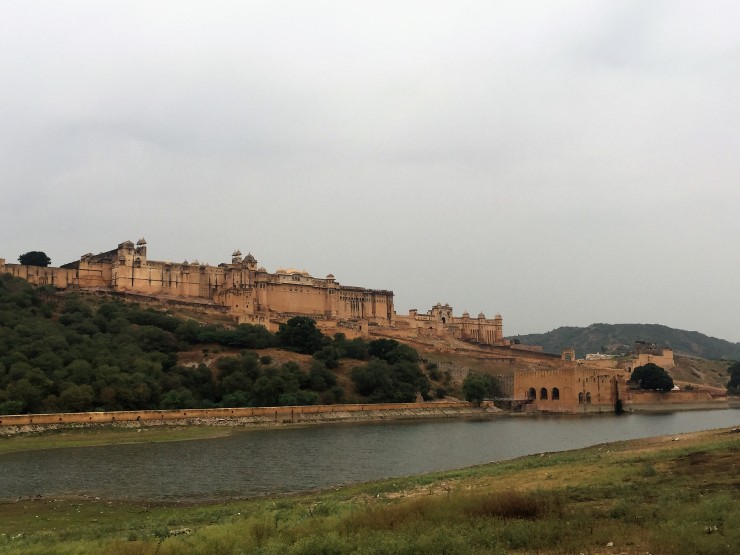 And it is stunning. Just wow. One side of the palace overlooks a lake and all around is a massive wall to offer protection; it resembles the Great Wall of China.

The palace sits high up on a forested hill and it is a fun walk to get there-a mix of cobblestone stairs and ramps.

Of course I’m a mess by the time I get to the top. Finally we walk through the large gate that leads into the 4 sectioned palace and I’m amazed by the splendor. 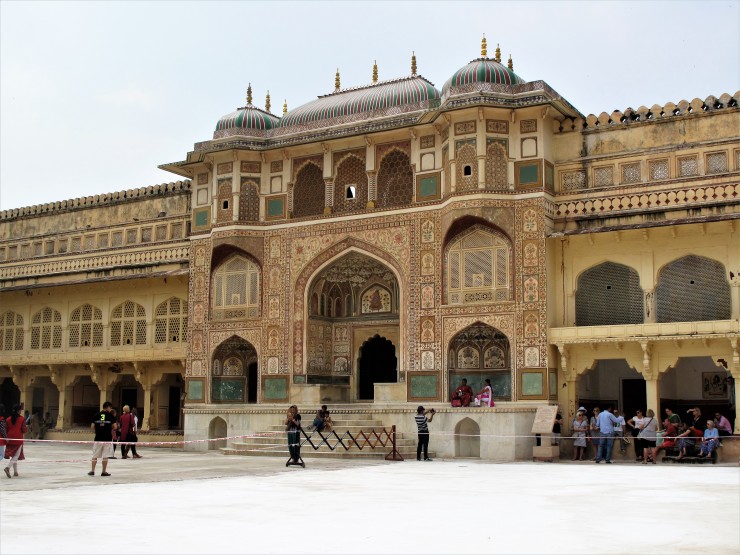 The beautiful Ganesh Pol entrance is the way in to explore the old rooms of the palace. We wander into another section of the complex, where we see the Diwan I Khas, which is the hall of private audience and is also known as Jas Mandir(the glass palace).

It is decorated with floral design with glass mirrors in them. The effect was to have it glitter in candlelight. 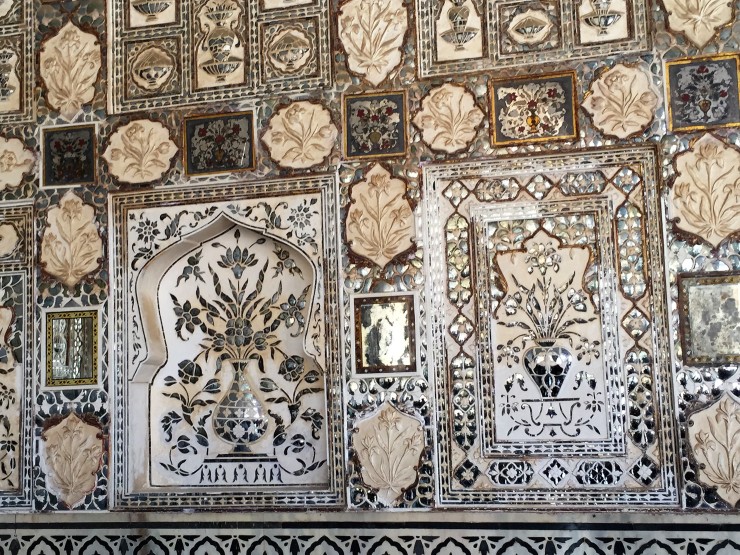 Across from the palace is a beautiful garden with perfectly coiffed bushes and topiaries, with a star shaped pond with fountains in the center.

From the topmost part of the palace, the view of the surrounding area is breathtaking!

Amber Fort is not to be missed when in Jaipur-one of the highlights of the trip so far. The morning ends with a photo stop at the Jal Mahal,  a palace situated in the middle of a lake. It is not open to the public so admiration from afar will have to do!