A very early morning to catch a train into Belgrade, Serbia.  The journey is around 8 hours.  It is nice to sit and relax after a hectic couple of days in Hungary, and it gives me a chance to get to know the travelers in my group.  We hop off the train, backpacks on and suitcases in tow and walk across the street to our hotel. Very convenient! We are staying at the Belgrade City Hotel. The main part of the hotel seems fancy; our rooms are out the back door in a separate building called the Annex 3. 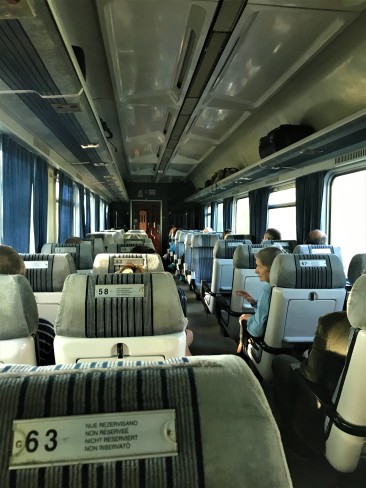 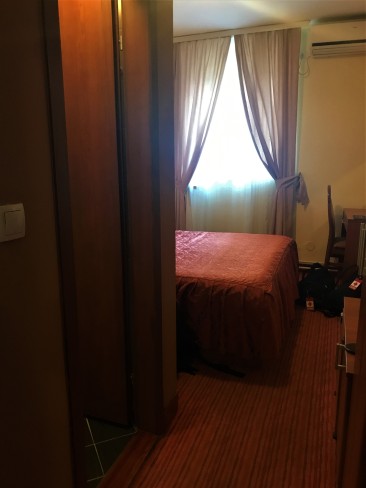 Much smaller rooms, and for the budget traveler.  A quick check in, and we are off to explore the city for the evening.

Belgrade is the capital city of Serbia, and lies where the Danube and Sava rivers meet.  It is a financial, political and cultural hub of the country, a rapidly developing city. Serbia was once a part of Yugoslavia, and has been independent since 2006.  It is a relatively modern looking city, as it has been destroyed and rebuilt many times after wars. The oldest part remaining is the Belgrade City Fortress, dating back to 3rd century BC!

After about a 20 min walk, we end up at Knez Mihailova Street which is the main pedestrian and shopping area in Belgrade. 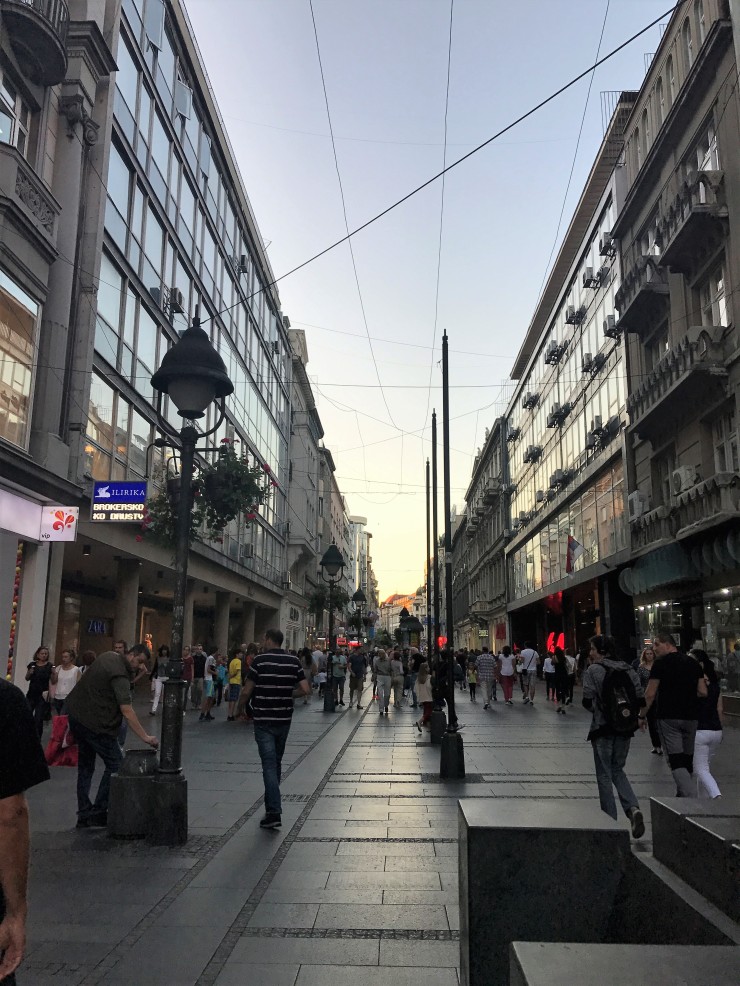 It is alive with people; it’s vibrant and excitement is in the air.  Clowns with balloons stroll along the street, and buskers entertain the masses. We are told there is a grand opening for a new shopping mall, so it’s more festive than usual!  People of all ages sit in cafes in Republic Square, a great place to chill and people watch. 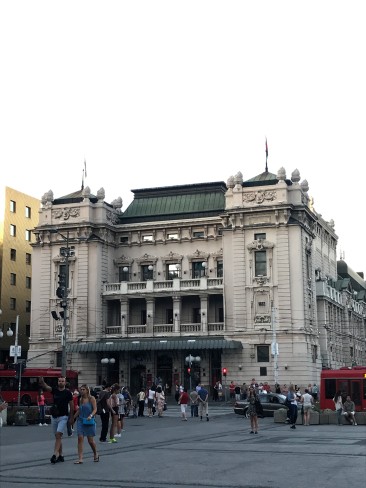 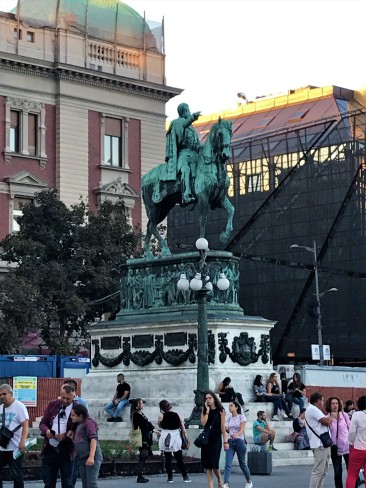 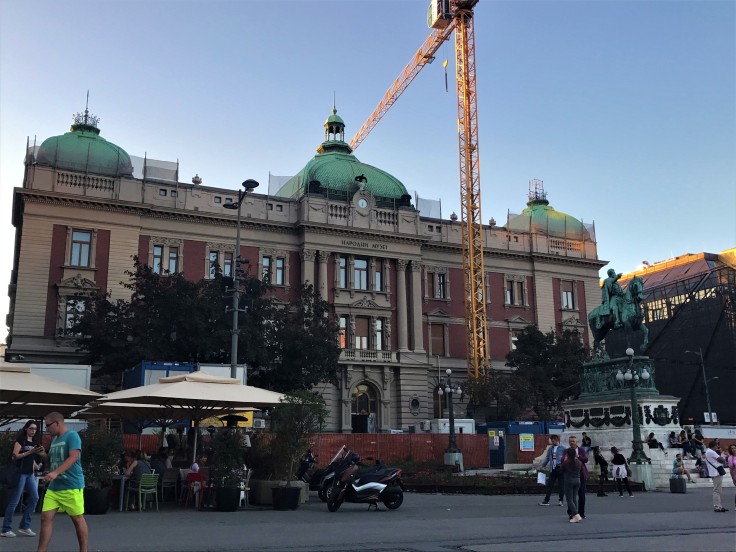 A statue of Prince Mihailo on his horse provides an easy meeting place for friends and family.  The square is surrounded by the National Museum and the National Theatre.  Historical Fact: this square was the site of demonstrations to oust Milosevic in the ‘90’s.

This is where we meet up with Milos, our local guide. He takes us back down Knez Mihailova, stopping along the way to explain the history of Belgrade and Serbia.  We arrive at Kalemegdan Park, the largest park in the city that also contains the famous Belgrade Fortress. The fortress is the most visited site in Belgrade. 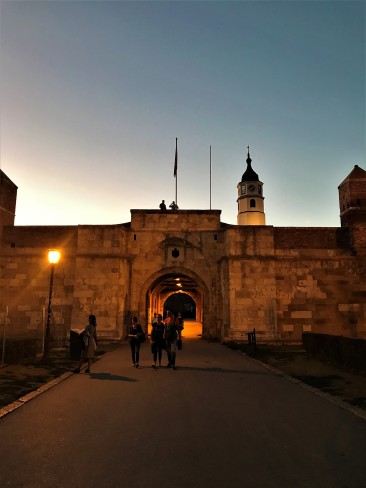 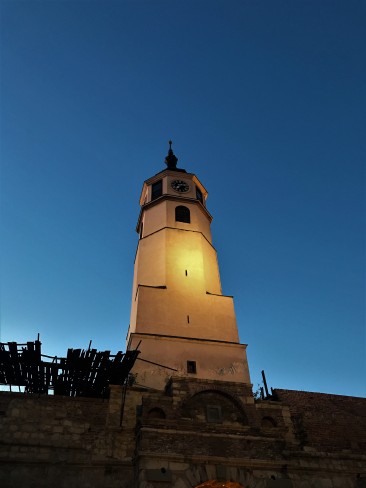 We head through the Stambol Gate, walking past a display of life size dinosaurs, which is a bit of an odd addition. The clock tower stands tall as we enter, and we head up onto a hill overlooking the place where the Danube and Sava Rivers converge. Milos continues his history talk, and we watch as the sun sets on the rivers; yellow and orange hues over the lights of the city. 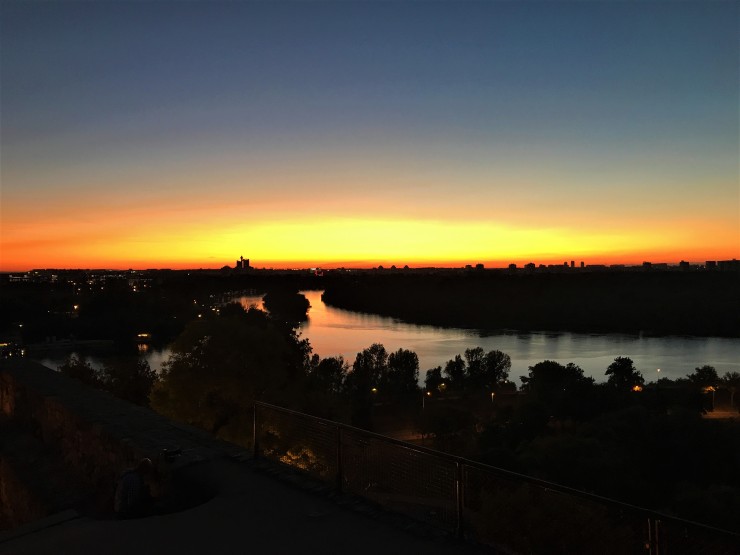 We continue past a huge monument, a nude man on a large pillar holding a sword and a falcon. It is a famous statue in Belgrade called The Victor. It represents the victory of Serbia over the Ottoman and Austro Hungarian Empire during the First World War and Balkan wars. 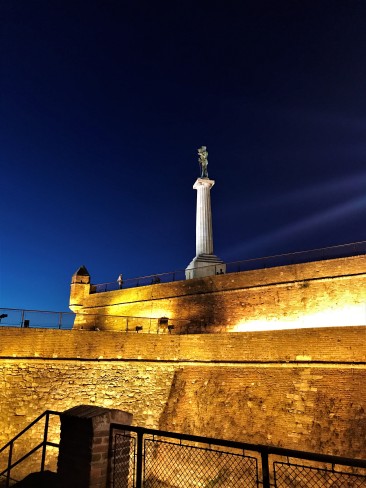 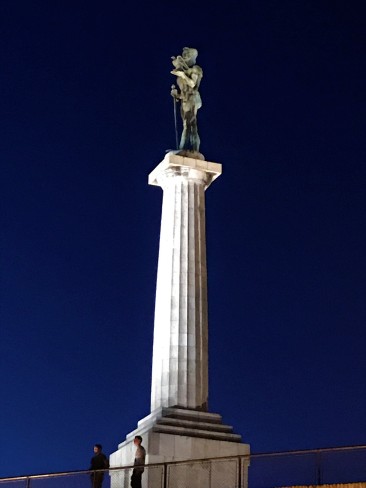 Also known as Pobednik, it was designed by famous artist Ivan Mestrovic.  Fun fact: the statue was going to be placed in the center of the city, but it was met with objections from female organizations because a nude man in this location would be “rude”.

It’s getting dark and it’s time for dinner…over to the oldest restaurant in Belgrade called Question Mark, built in 1824! I order cevapi, a Serbian style skinless sausage.  I get mine on top of kajmak (a clotted cream similar to cheese) with a side of ajvar for dipping (a delicious red pepper spread). And what a better pairing with this meal than an ice cold Jelen, a pale lager brewed in Serbia. 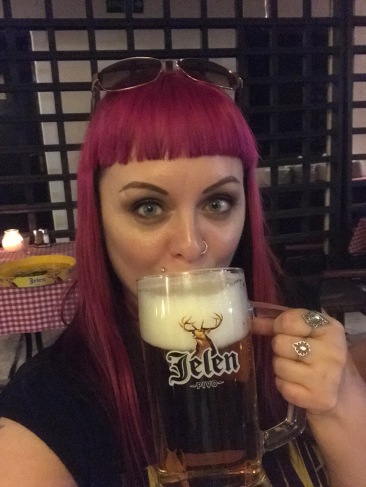 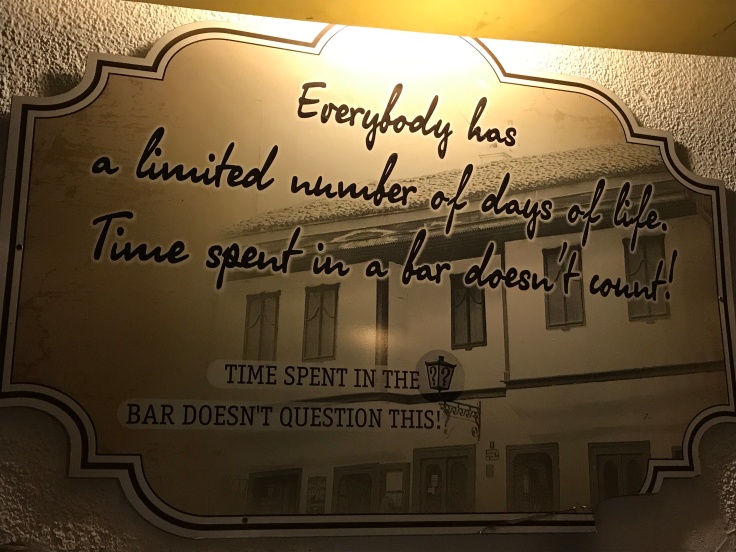 Since Belgrade is known for being a party town until all hours of the night, me and the boys decide to have little fun after dinner. We head to the Bohemian Quarter (also called Skadarlija), and walk along the cobblestone streets admiring the quaint buildings and bustling patios. 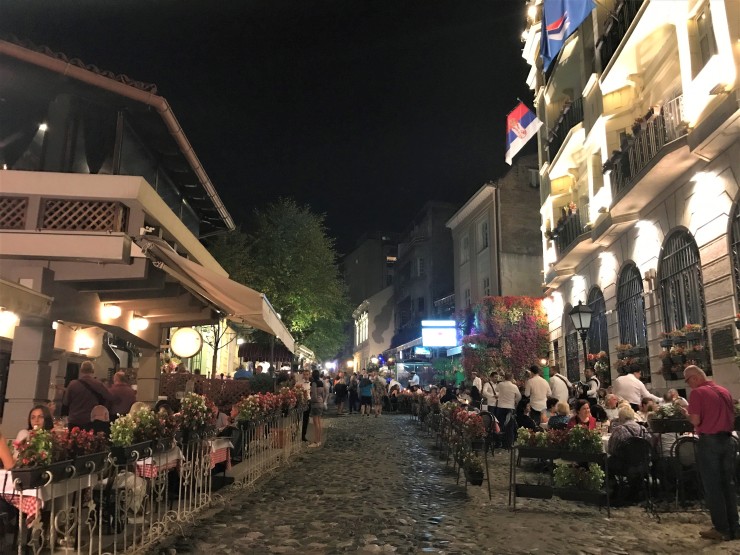 There is a street stall set up, selling Rakija – a very potent fruit brandy. We each do a shot, and settle on a place to watch Eurobasket on TV. Vid is from Slovenia, and they are in contention to win the title. Slovenia wins tonight, only one game to go. The party continues as we walk down towards the river to a bar that was recommended to Vid by a fellow tour leader. It is cool, but empty. There is an outdoor bar across the way called Tranzit, and it is much more alive so we go there for one drink. It’s trendy, with loud DJ music and neon lights.  We then take a cab across the water to check out the splavs, which are floating river nightclubs. There are many to choose from, but we are denied access to a couple of them…we think it’s because Vid and Anthony are dressed too casual, or because we don’t have reservations? Or both?  We choose the one that is right up my alley…it has a live rock band! I can’t recall the name of this splav (bad bad blogger!), but it had a fun non-pretentious vibe. I wish we could have partied all night (2am was our limit), but tomorrow is another day for exploring Belgrade!