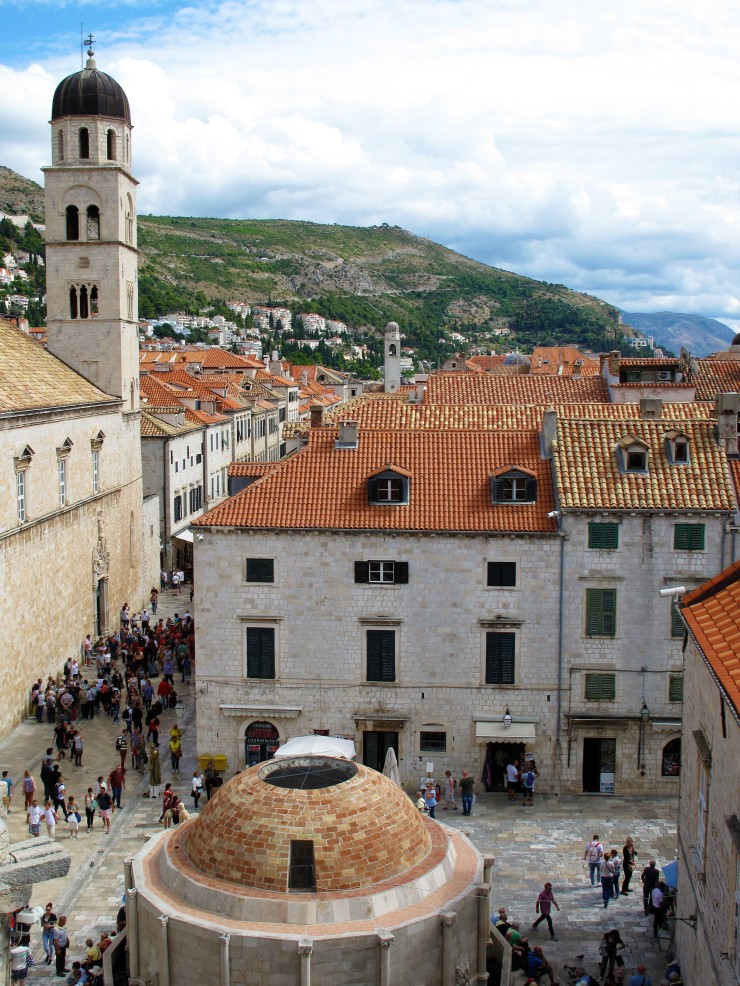 And now we’re off to Croatia, one of the most popular tourist destinations in the world! So many options in this fascinating country…exploring ancient cities, beautiful parks, sailing to remote islands. The Romans ruled this area many years ago, so you can see its influence in the architecture, cuisine and way of life.  The first stop is Dubrovnik, only a few short hours’ drive from Montenegro. The rich history, seaside landscape and beautiful architecture make it a MUST SEE on for your next vacation.

Everything here is super touristy and expensive compared to other cities. We are staying in an area called Babin Kuk, on the Lapad peninsula. It is a short bus ride from the Old Town, and is a much quieter and cheaper area to stay. The area has parks, and a lovely promendade with restaurants and cafes.  A gravel beach sits at the end of the promenade, which is perfect on a sunny Croatian day.  We are staying in private apartments; I’m in a 2 bedroom 2 bathroom suite with Anthony and it’s spacious and cute.

The only drawback is the climb up and down from the promenade below…I counted 300 steps. Not cool when you have to do this 5-6 times daily!

It’s now time to squeeze on to the packed bus to explore the Old Walled town of Dubrovnik.  Dubrovnik is a city on the Adriatic Sea, and a top tourist destination.  It is also a UNESCO World Heritage site (YAY! another one crossed off my list!).  When we get off the bus, we are instantly drowning in a sea of tourists…like sooo many!! Dubrovnik is also a cruise ship destination, so if you want to avoid this, visit the Old Town later in the afternoon. I am here in September which is shoulder season and it’s still crowded so I can’t imagine what it would be like in July or August!

We enter into the town by the Pile Gate, and head up to do the City Walls Walk.  It is 2 km long, and dates back in the 13th century—but don’t worry – the walls have been reinforced many times since then. The Walls take around an hour to navigate and the views from up here are fantastic! With the orange roofed buildings inside the walls, islands off in the distance in the Adriatic Sea, it really is picture perfect!

Off to the right, I can see the Lovrijenac Fortress.  It protects sea and land entrance to the city and was crucial in preventing a Venetian takeover.  Entrance to the fort is included with The Walls ticket, but I do not have a chance to explore it today. 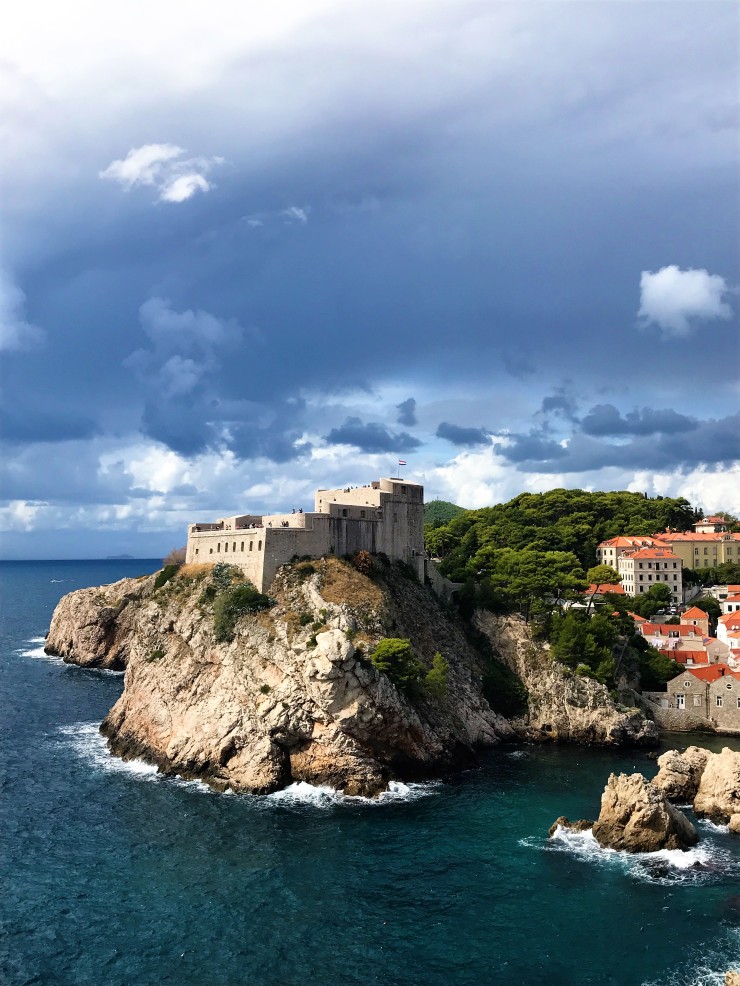 If this city looks familiar to Game of Thrones fans, it’s because it acts as Kings Landing in the popular HBO show! There are Game of Thrones themed tours you can take, but I decide not to this time.  In the distance, in the southeast I can see Lokrum Island…a huge uninhabited island that I will explore tomorrow. 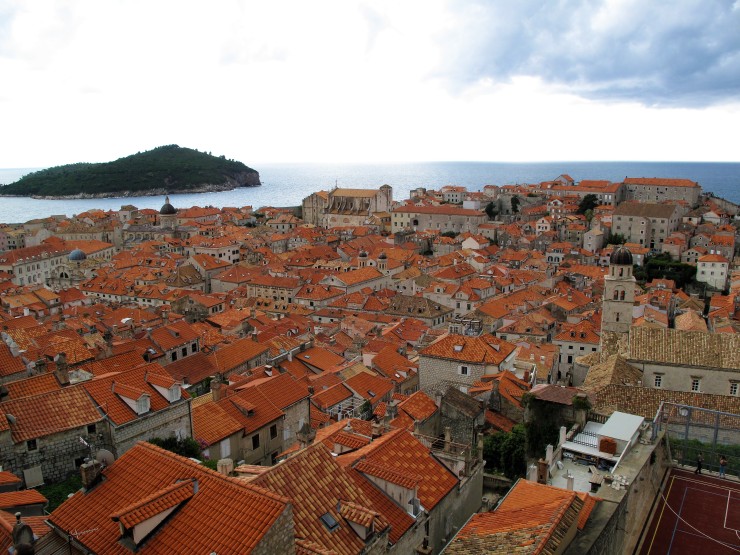 Rounding out the loop near the end is Fort Minceta. It is the highest point on the wall, and you can climb even higher up some steep stairs to the very top.

There are dark looming clouds and as we near the end of the walk, it starts to come down pretty good so we pop up our umbrellas and find a place for lunch. Up a bunch of steps down a small alley leads us to Prijeko Street, one of the main street in the Old Town. We find a quaint place with patio seating called Lanii.  It is nice to sit outside and people watch while enjoying my beef gnocchi and fresh Ozusko beer – so comforting on a rainy day.

But luckily, the rain stops and Anthony and I take a ride up in the cable car on top of Srd Hill.  I don’t know what it is about cable cars, but every time I’m in one I have an irrational fear that the cable is going to snap and we come crashing down. The ride takes around 4 minutes, and on the way up we are treated to spectacular panoramic views of the Dubrovnik below. It is the best way to see the city from above. We go in the middle of the afternoon but it would be amazing to be up here for sunset…a popular choice, so plan ahead if you want to experience this. We wander around for a bit up top, searching for that perfect photo.

Now it’s time to head back down and wander around the old city and check out the sites.  Most of the buildings have been destroyed by the 1667 earthquakes, and have been reconstructed.  Also, there was damage sustained during the war in 1991; around half of the city needed to be restored.  Right when we walk into the Pile Gate we see the Big Onofrio fountain in the small square.

There are 16 faces carved around the fountain and water comes out of their mouths! Feel free to fill up your water bottle, it’s safe.  Onofrio was a crafty guy…he successfully built a reservoir/aqueduct system to bring water to the city, via the fountain. St Saviour’s Church is a tiny votive church across from the fountain.

It survived the earthquake of 1667, so this little gem is pretty special! Then we walk down the main promenade called Placa (Stradun);  a straight walkway with limestone pavement that glistens in the sun and the rain…be careful though – it can be slippery! 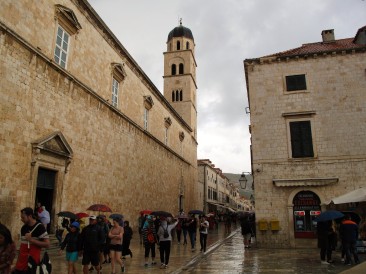 There are many souvenir shops and restaurants, and a guy with around 10 exotic birds that you can take pics with. At the end of the Placa is Luza Sqaure and the Bell Tower, its brass face showing phases of the moon.

It stands 31m high, and has two bronze figures at the top that strike the bell each day at noon. Beside the tower is the Sponza Palace, which houses the National Archives.  In front of the tower is Small Onofrio’s fountain, another water source for the city.

And standing magnificent in Luza square is St Blaise’s Church, one of the most prominent and beloved churches in the city. Built in the early 1700’s, it is a Baroque style church with a large staircase leading me inside.  The marble altars inside are beautiful.

In front of the church is Orlando’s column, a monument that stands for freedom. Orlando was a medieval knight who defended the Republic and allowed Dubrovnik to remain a free trade city state.

I make my way back to Babin Kuk to meet up with our group for our last dinner together. Vid chooses a fancier place this time, called Lapad. I opt for the veggie risotto which is nice, but a little heavy on the red pepper (not a big fan of pepper). We say goodbye to 3 people, and will have another 8 people join us tomorrow for the next leg of the tour!