I spent 1.5 days in Split, Croatia.  The rich history, beaches on the Adriatic Sea and beautiful ancient Roman architecture make it a fascinating stop on your trip to Europe.  I visited a few places in Croatia and this was my favorite BY FAR!

Split is a cruise ship destination so be aware of this; I didn’t find it to be too crowded when I visited but there is a possibility.

We stayed at two different hotels, due to a mix up. The first hotel was Hotel Jadran. A short 20 min walk to the Old Town, it’s located along the coastline and has a large pool. The rooms we stayed in were average, but the atmosphere here was bright and welcoming. I wish we’d have stayed here both nights.

The second one was called Villa Marjela, and I would not recommend staying here.  First, it wasn’t in the nicest area. Second, the rooms were down a hallway where sound carries – the front desk guy was talking (yelling) to his buddy and I had to leave my room and tell them to be quiet as we had an early morning ahead.  The rooms were ok though.

There seems to be a lot of Air BNB options as well, so whatever works best for you!

The Four Gates – the entryways to the Diocletian’s Palace (main part of the Old Town). There are the Iron, Golden, Silver and Bronze gates. 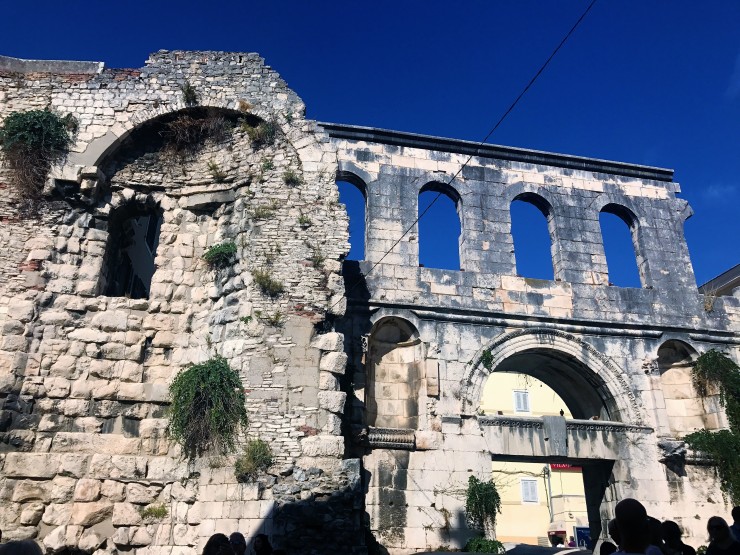 Diocletian’s Palace – it is the oldest part of the city- around 1700 years old.  It is one of the best preserved monuments of Roman architecture in the world, and a UNESCO World Heritage Site. It was the Diocletian’s “retirement home”.  After the palace was abandoned, the locals moved into it and rebuilt it with homes and businesses. It is the one of the only Old Town’s in the world that is mostly residential.  Many of the crumbling walls are still intact, and your tour guide can tell you what was where. Also, explore the cellars….another filming site for Game of Thrones!

Vestibule – the circular area that connects Peristyle Square to the entry of the palace. It is known for its acoustics, so it’s no surprise that that many singers and choirs perform in here.

Peristyle Square – the central square of the Palace, and always full of people. The Roman columns tower above, actors walk around in Roman garb, and it feels like you’ve stepped back in time. Check out the black granite sphinx atop one of the walls. This guy has been sitting here since the Diocletian was around and is approximately 3500 years old! 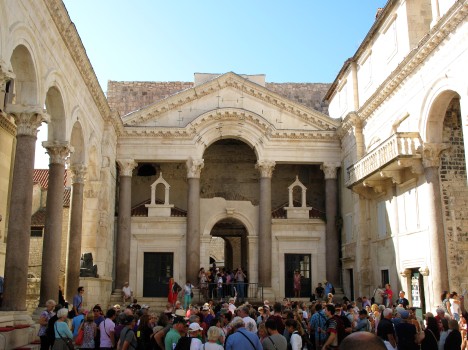 St. Domnius Cathedral – was once the mausoleum of the Diocletian. But as time went on it was turned into a Christian church, and the remains of Diocletian and his relics were removed and destroyed.  You can have a look inside if you wish!  Small entry fee. 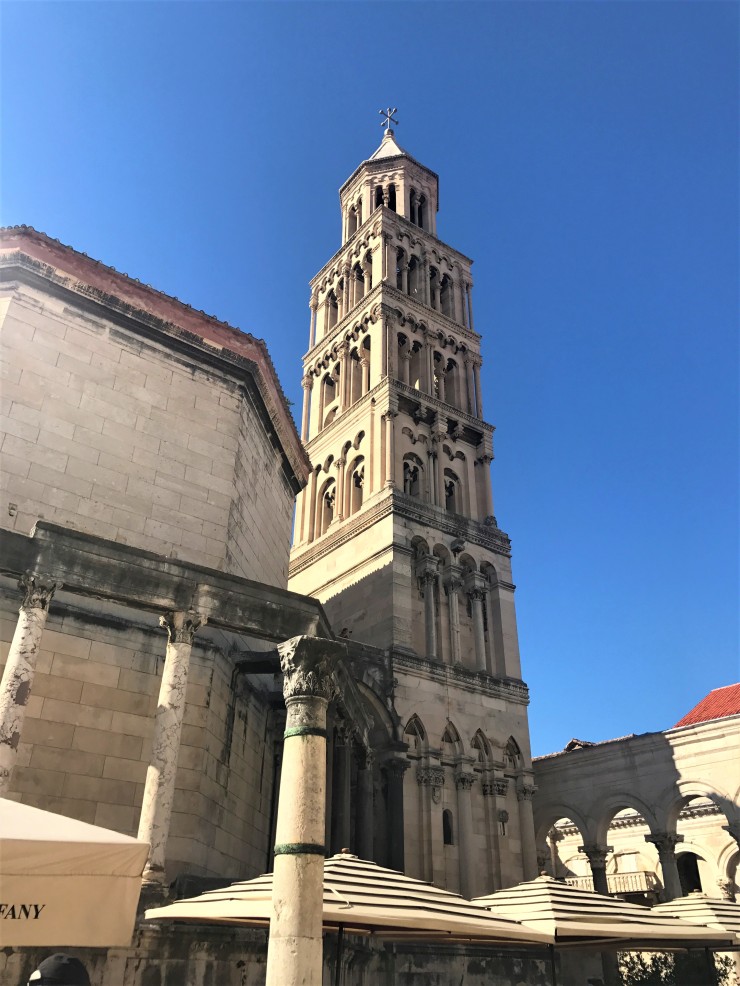 Temple of Jupiter – a very small temple located down the smallest street in the world (Let Me Pass Street). Outside of the temple sits another black granite sphinx – but this one is headless. This temple was built to serve and celebrate Jupiter’s cult.  The Christians converted it, and now inside stands a statue of John the Baptist. There is a fee to get inside, which I thought was too expensive (but I did it anyway!). 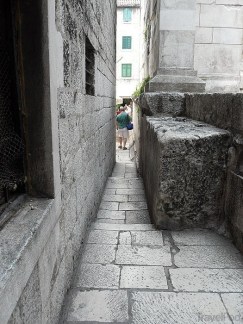 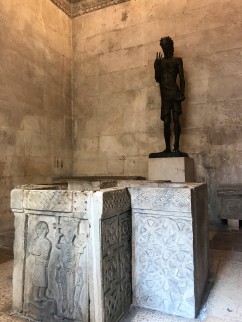 Statue of Gregor of Nin – he’s 28 ft tall, and can be reached through the Golden Gate outside of the palace walls. He was a mediaeval bishop who brought the Croatian language to religious services (they were usually held in Latin). This made him not so popular with the Pope at the time.  Gregor is impressive but a bit menacing, so began the tradition of rubbing his big toe for good luck! 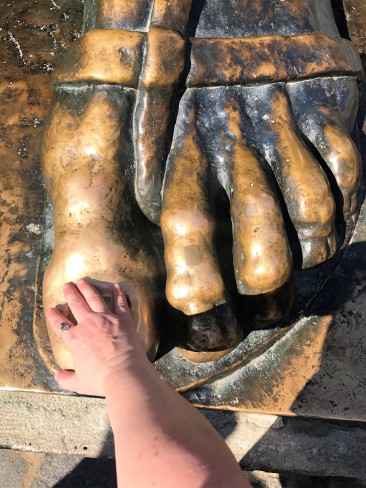 Republic Square – three sides of colorful buildings, and one side open to the sea. It usually hosts many cultural and music events.

Vocni Trg (Fruit Square) – through the Bronze Gate, this square once hosted a daily fruit market.  It is a quaint and pretty square, with a statue of Marko Marulic in the center and the Venetian style Octagonal Tower fortifying the square. 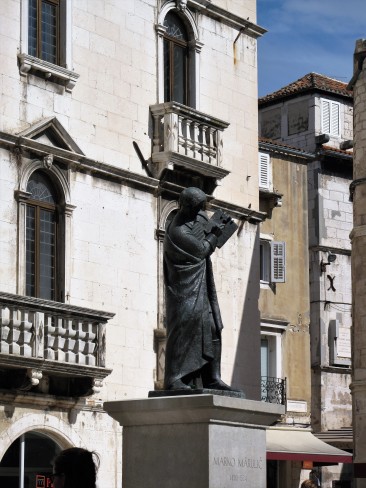 Stroll along the Riva – the waterfront promenade offers views of the Adriatic, the ancient walls of the Diocletian’s Palace, and is a place to sit and relax with a coffee, wine or gelato. People watching at its finest.

Climb the Bell Tower – Part of the Cathedral, it was not built in the time of the Diocletian.  It seems fragile, and it has been reinforced many times because it was built in the 13th century. But hey, you can climb it! Not for the faint at heart or those afraid of heights. There are many open windows on the way up and the stairs are see through.  It is 57m high, so brace yourself and take a deep breath and enjoy the amazing views from the top! Small entry fee.

Narodni Trg (People’s Square) – have a quick look, or stop for a coffee at one of the oldest café’s in the world – City Café . You can see the Iron Gate from the patio, with a small church and bell tower above the gate. 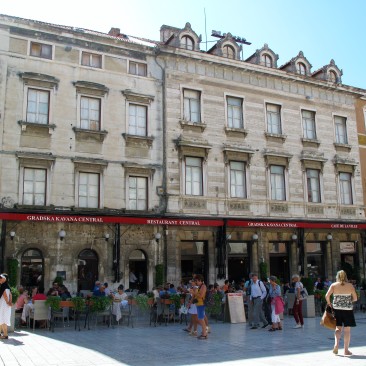 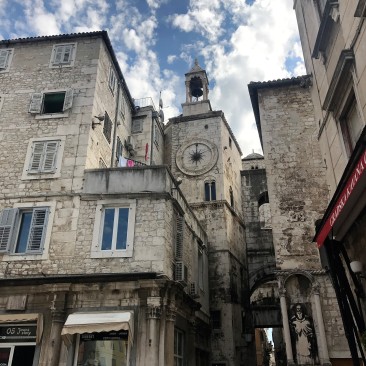 Hike up Marjan Hill –  it is a large and beloved park here in Split. Enjoy all of your outdoor activities here. And if you make it to the top of the hill, enjoy some of the best views in Split. If you prefer to stay lower down, there are also a number of beaches around the vicinity of the park. I did not have time to visit this park, but I definitely will if I’m ever back in Split!

Places to Eat, Things to Eat:

Konoba Pizzeria Feral – a really popular and highly recommended restaurant, with a traditional look on the inside. I did not try the pizza, but went for the calamari instead and it was delicious. It’s just past Republic Square outside of the Old Town.

Luka Ice Cream and Cakes – really unique flavors to choose from, and it’s all natural and fresh. I had the mango flavor.

Uje Oil Bar – I didn’t get a chance to go here, but it sounds amazing! Tapas style food, with a vast selection of oils and wine.

Paradox Wine and Cheese Bar – did not get a chance to go here either and it’s too bad because it is one of the number one places to eat/drink in Split.

Seafood and more seafood! – Fresh, vast selection. Try it in a buzara (with wine, tomato sauce and spices) or a platter.

Cevapi – minced meat in a skinless sausage, served on its own or with flatbread

Zinfandel Food and Wine Bar – another highly recommended place. With over 100 wines to offer, and tapas and seasonal food choices.

Leopold’s Delicatessen Bar –  vast choice of craft beers in a causal setting.  We tried to go here, but it was closed and it didn’t fit in our time frame to go back. Dammit!

Wine– so many types of wine are made in Croatia, so enjoy your wine tasting!

Pazar Market –  just outside of the silver gate –  it’s where I did all of my souvenir shopping!

Olive Oil – extra virgin is the best, but there are many types made locally here

Lavender – you can buy it in sachets, or pure lavender oil.

Stone from Brac Island – there are many options: from knick knacks, magnets, and paintings on the stone.

Things I Missed But Would Do Next Time:

Brac Island – Perfect for a full day trip. A 50 minute ferry ride from Split to the town of Supetar on the Island. There are a few cool things to see in Supetar. Then head over to the town of Bol; it is most famous for Zlatni Rat, a beautiful white pebble beach.  Brac is also known for its olive oil production. It is where you will find the beautiful white Brac stone that is used in many buildings in Split; some of the stone was also used in building the White House. I decided to skip this trip so I could spend more time exploring The Old Town, but I would definitely go next time!