Ever wondered what to see and do in each of Disney’s lands? Look no further! In this blog, I’ll offer my opinions of the rides and where to find some cool eats, treats and souvenirs!

The place that feels the most like Disneyland, like a magical fairytale. You’ll find the most character themed rides here.  You will first walk in through Sleeping Beauty’s Castle, an iconic image of Disney. Fun Fact: it is modeled after Neuschwanstein Castle in Germany. 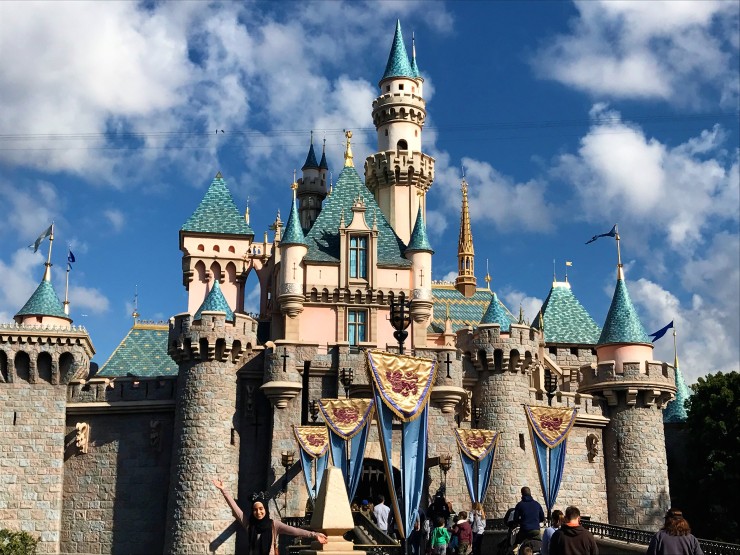 You can also explore the inside of the castle..It has a collection of dioramas telling the storyline of Sleeping Beauty.  Fun fact: this attraction was closed for 7 years after the 9/11 attacks for safety reasons.

Snow White’s Scary Adventures – the first ride we went on. No lineup. Yay! It’s one of the original rides from 1955. I guess the scary part is going through the dark forest to the evil queen’s palace? When you exit the ride, look up at one of the curtained windows of the Queen’s castle and you’ll see her peek out every few minutes. 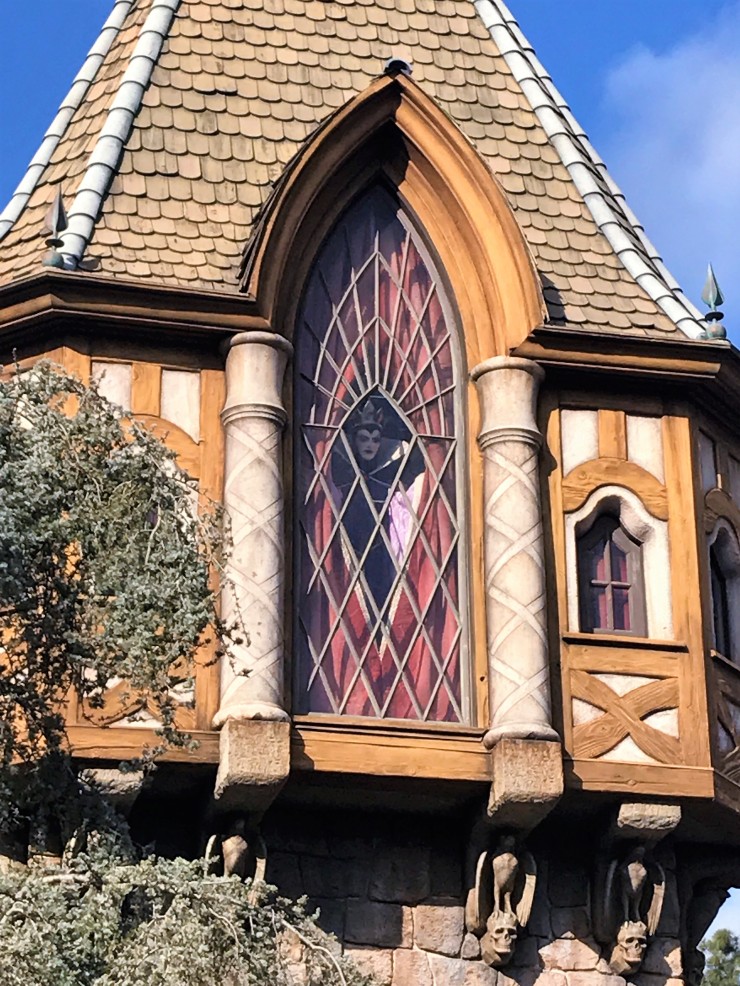 Pinocchio’s Daring Journey – it’s a dark ride, but not at all scary. Just a quick jaunt in a wooden cart through Pinocchio’s village, with some storyline and characters from the movie.

Mr. Toad’s Wild Ride – I’ll admit…I didn’t know much about this story, but the ride is super fun.  It’s one of the original 1955 rides.  You’ll “crash” into a lot of things, jerk around to narrowly miss things, be chased by cops, etc. 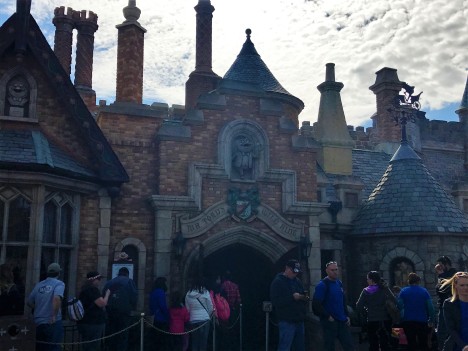 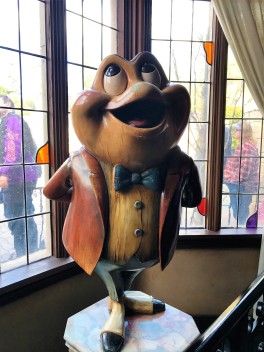 Peter Pan’s Flight – another original 1955 ride. It’s a dark ride but this time you’re in a flying sailboat, suspended like you’re soaring through the air. Just like Peter Pan looking down on London. This is a popular one, so I recommend lining up as early as possible and be prepared to wait at LEAST an hour. 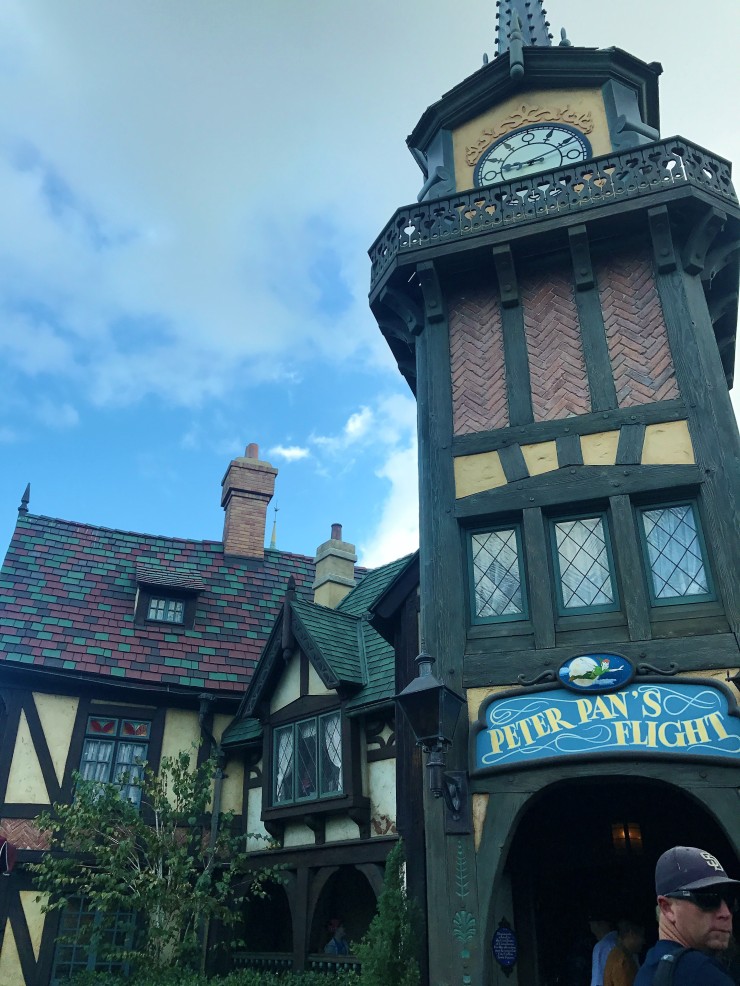 It’s a Small World – you can’t visit Disneyland without doing this ride.  Hop in the boat and float through a display of all parts of the world, with 300 audio animatronic children in traditional costumes singing the iconic song in different languages.  I found it visually stunning, with lots of attention to detail. The ride moves slow, so prepare for 15 minutes of hearing “It’s A Small World After All”…over and over and over again. And if that wasn’t enough, try getting  the song out of your head for the rest of the day! 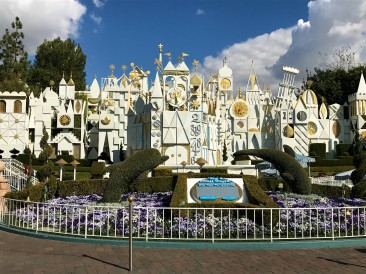 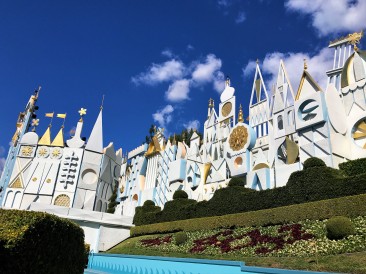 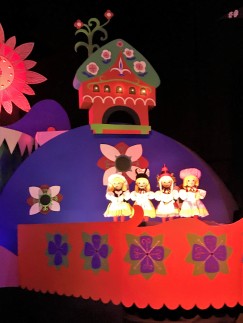 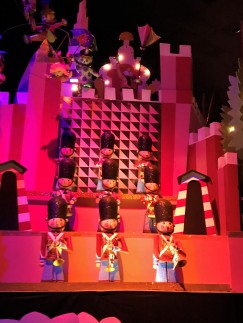 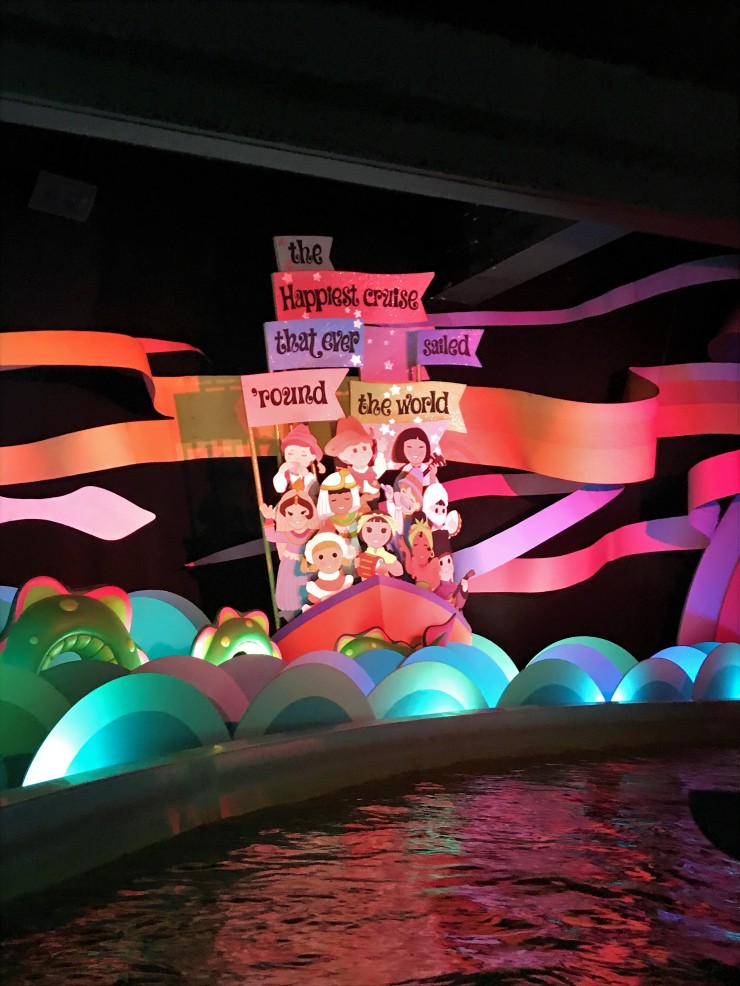 Matterhorn Bobsleds – hop into your sled as it climbs to the top of the mountain and then descends in and out of the mountain, splashing into the water at the end.  The Abominable Snowman makes a few appearances. Fun Fact: It was the first steel roller coaster in the world, and can only be found at Disneyland. A thrilling, fun ride. Single rider line got me on in 10 minutes, rather than 60. Yessss! 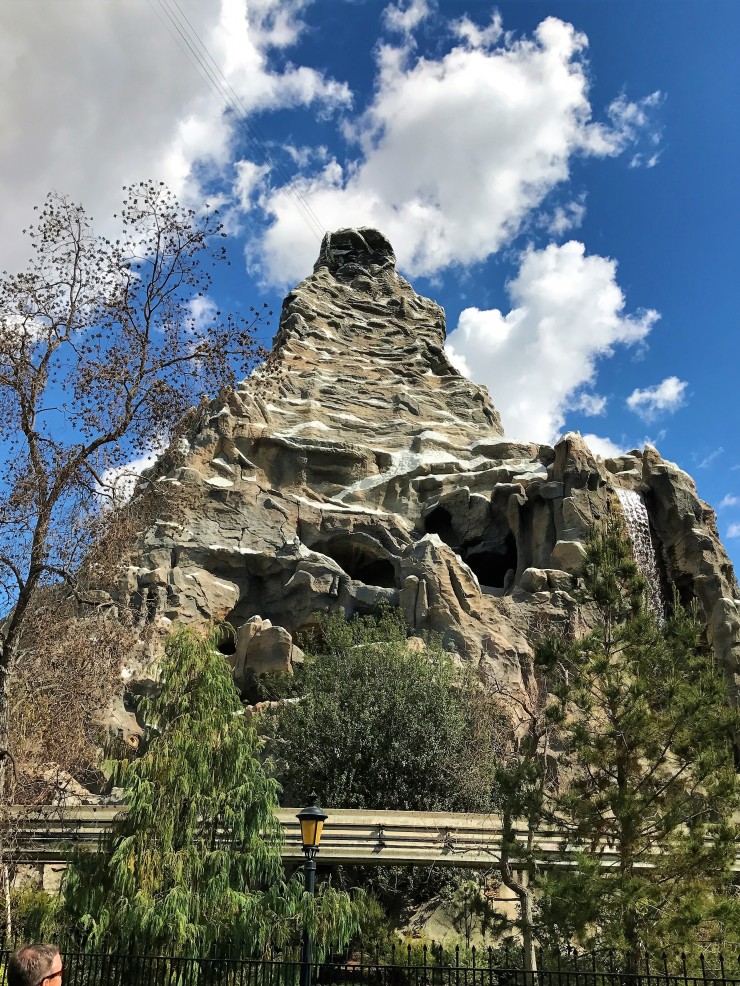 Pixie Hollow – we waited damn near half an hour to meet Tinker Bell here. I thought there would be more to the attraction, but nope.  Just a tall round garden area (to make you feel small, of course!) and then the meet and greet. She was cute, but I could have skipped it. 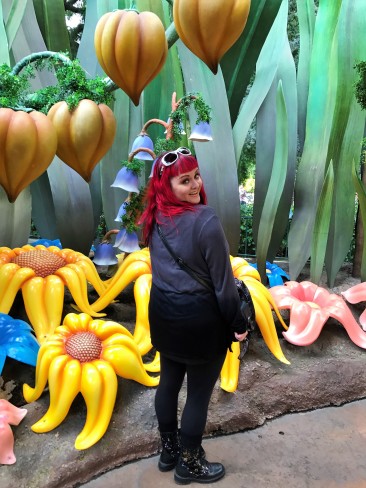 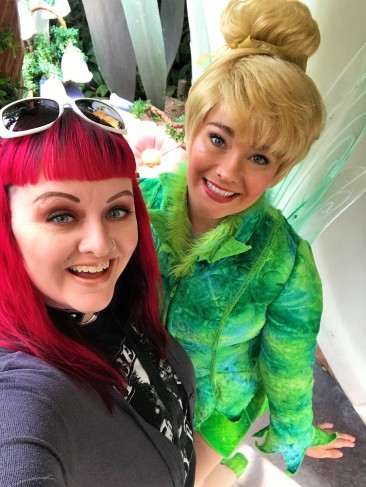 Mad Tea Party – you sit in a giant spinning cup…it spins mildly, but you can make it spin faster. Part of our agreement ( so mom and sis would ride with me) was that I was not allowed to spin it faster. Still fun though. Fun Fact: it cannot operate in the rain because the teapots can’t spin properly when wet. 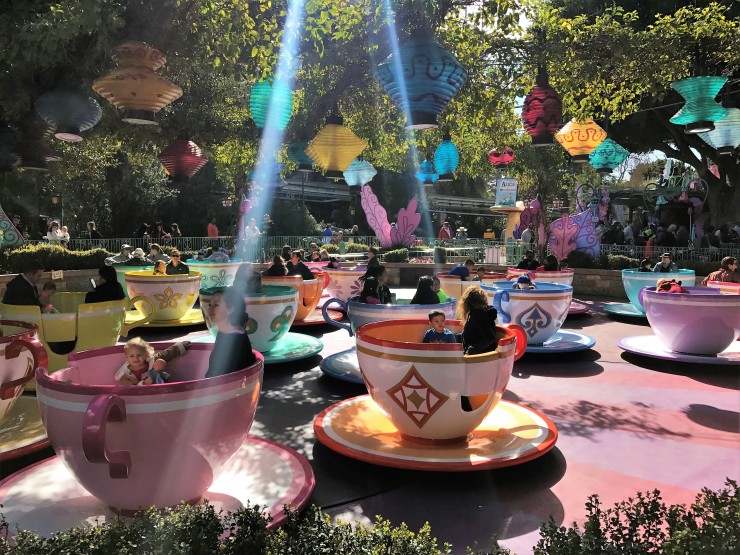 Alice in Wonderland – this time you jump into a caterpillar, as you “fall” down the rabbit hole.  Another dark ride, trippy like the movie with playing cards that dance and an angry queen.  Off with your head! 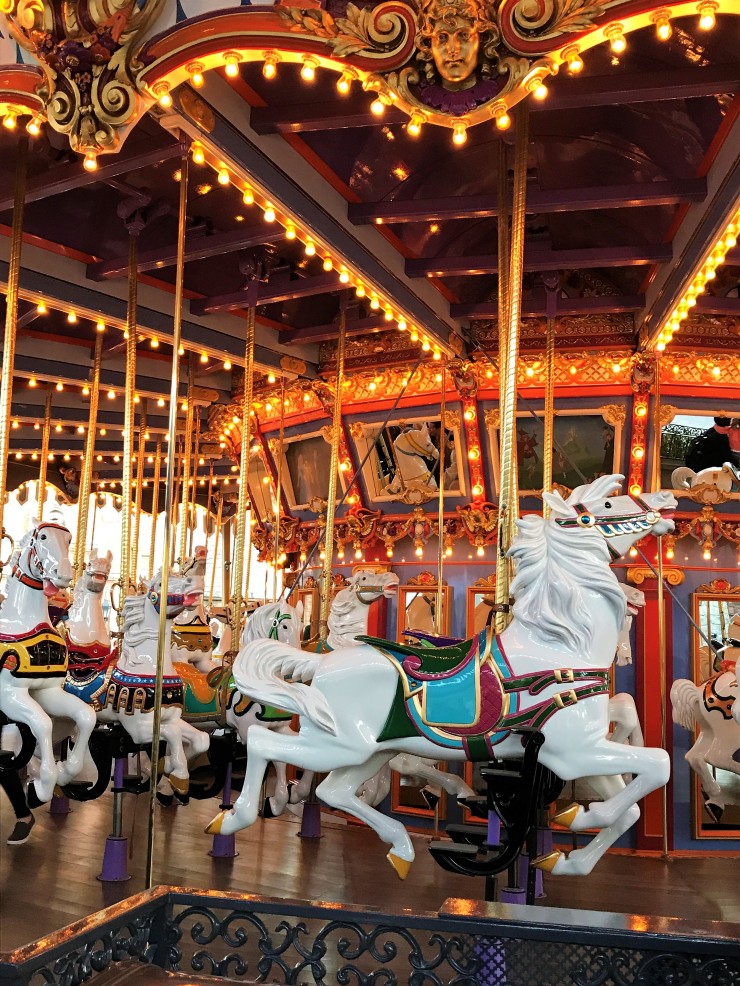 Storybook Land Canal Boats – ok, so as an adult, this was a complete waste of time. You sit in a boat and ride past miniature houses and castles from Disney’s stories.  Sure it’s cute, but not worth waiting close to 60 minutes. There is a driver who narrates…our guy was horrible..he got mixed up as to whose castle was whose, and my guess is he didn’t follow Disney script standards. Really unprofessional. 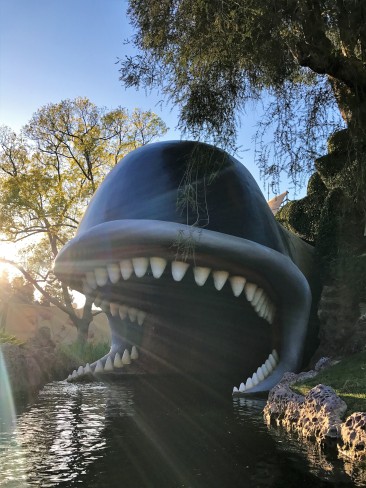 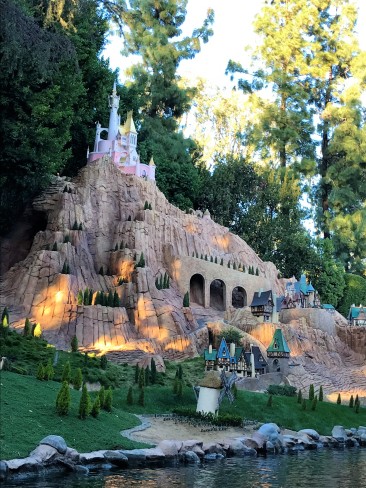 Fantasy Faire – where you go to meet the princesses. I wanted to do it, but my mom and sis didn’t want to after the Tinker Bell experience. And the lineup was awful, so you choose your battles.  It’s random as to which princesses will make an appearance. I managed to snap a pic of this one.. do you know who it is? Dumbo the Flying Elephant and Casey Jr. Circus Train were closed for refurbishment when I was there, so I have nothing to report.

Great Moments with Mr. Lincoln – located in Main Street USA. A short history lesson, in a very pretty theatre. It features an audio animatronic President Lincoln. Fun Fact – Walt Disney was fascinated with Abraham Lincoln, so this is a fitting attraction. 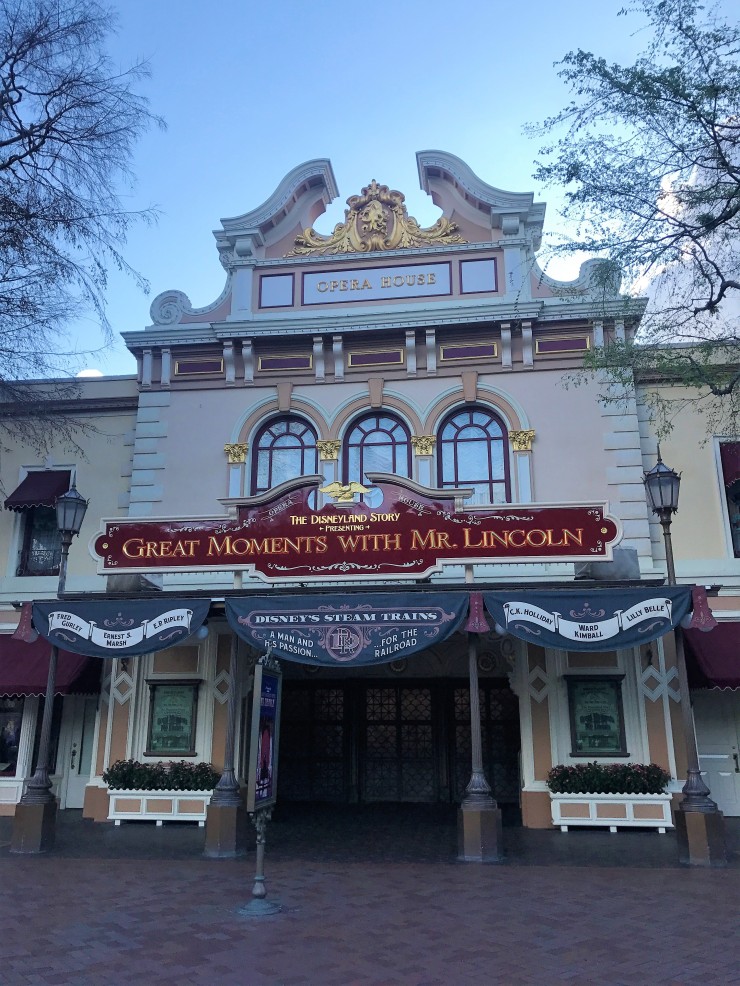 This is also a great venue to find many Disney characters. I ran into Minnie and Pluto inside the theatre, and Dale outside! 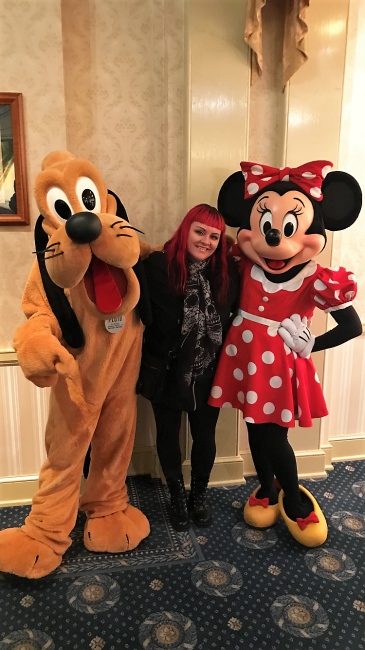 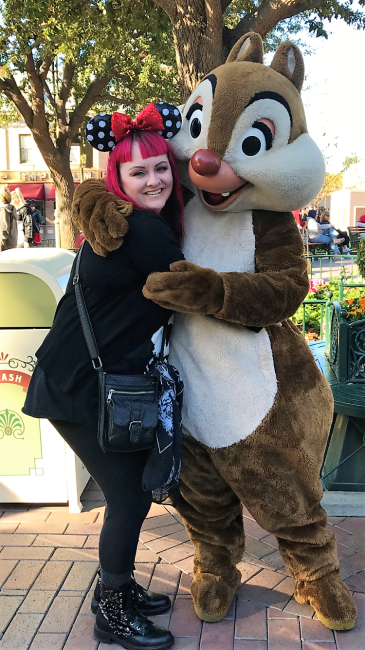 As in every land in Disneyland, there are a few restaurants and snack bars, but we did not formally dine here.  But here are some cool things to check out:

Churros – I’ve had street stall churros in Mexico that are hard to beat, but these ones are pretty good too!

Corn Dogs – apparently, they taste like no other..It might be the best corn dog you’ll ever eat! Get them at Little Red Wagon.

Turkey legs – they didn’t look that appealing to me, but they must be tasty – so many people were walking around chomping on these. It’s iconic. You can get one at Edelweiss Snacks, or at one of the street carts.

Character Dining – We chose not to do it this time, but I’ve heard it is pretty fun, especially for the kids. You get to have a meal with your fave characters! Breakfast in the Park with Minnie and Friends is the only one inside the Park, and usually has double the character appearances than the others. The other dining options are outside the park in the hotels.

Bibidi Bobidi Boutique, where you can buy Disney Princess outfits and sit in the salon and get all done up like a princess. Little girls must LOVE THIS. The age cut-off is 12, so it was a not an option for us old ladies.

Any stuffed animal – I don’t care if it’s Mickey or Minnie or Donald…they are adorable and great quality.

A Silhouette – there is a shop on Main Street USA that sells these…you can have your own silhouette, or that of an iconic character. I chose Snow White. The ladies have been there for 30+ years and they cut the silhouette free hand while you watch with fascination. I think this is a really unique souvenir. 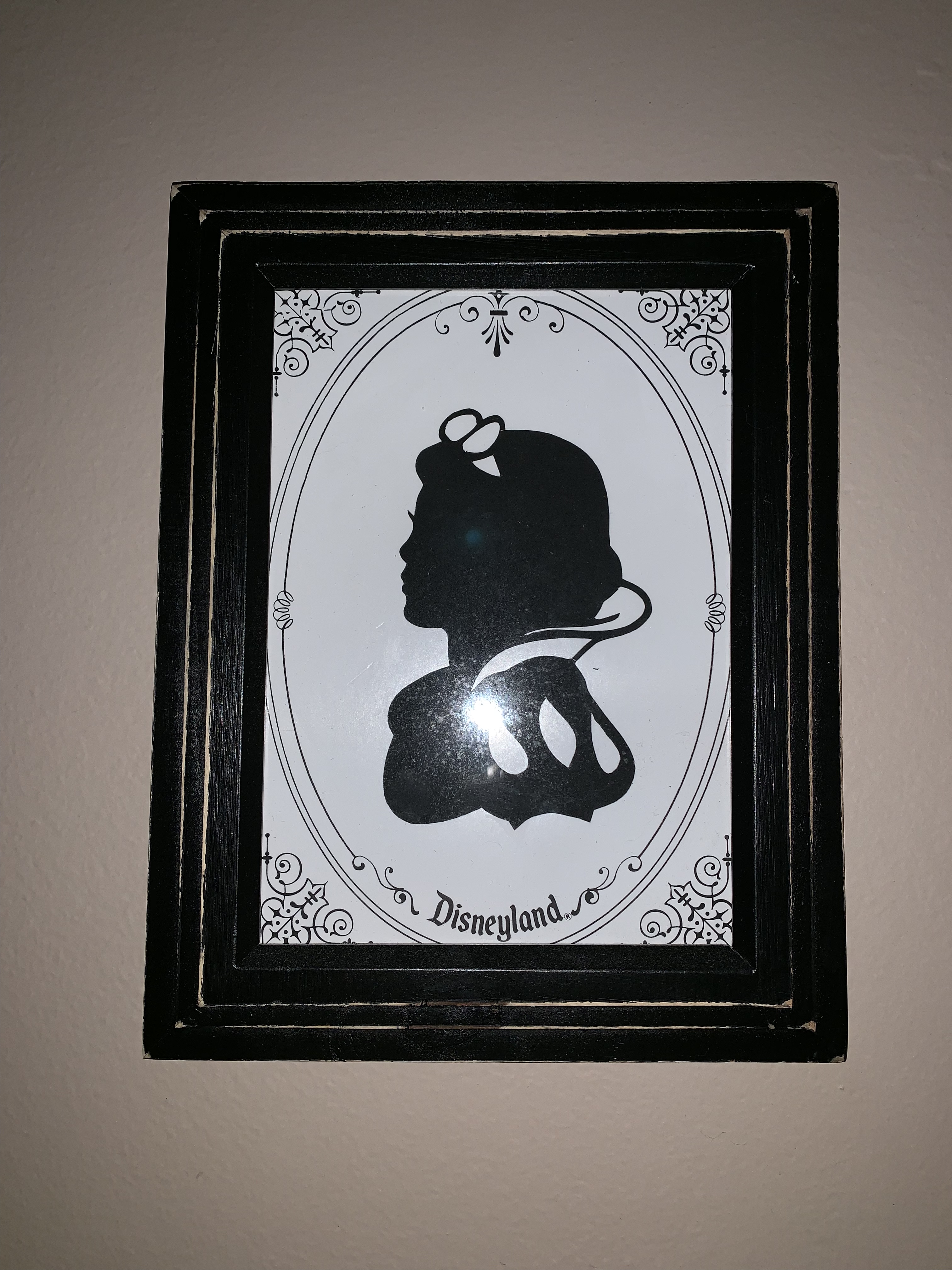 Mouse Ears headbands – I’ll admit, I thought they were silly when I first saw them. And then when you’re in the park and feeling the vibes and everyone is wearing them, you NEED them. I opted for a sparkly polka dot version. For the guys, there is the iconic Mouse Ears hat. It’s free to get your name embroidered on the back of the hat. 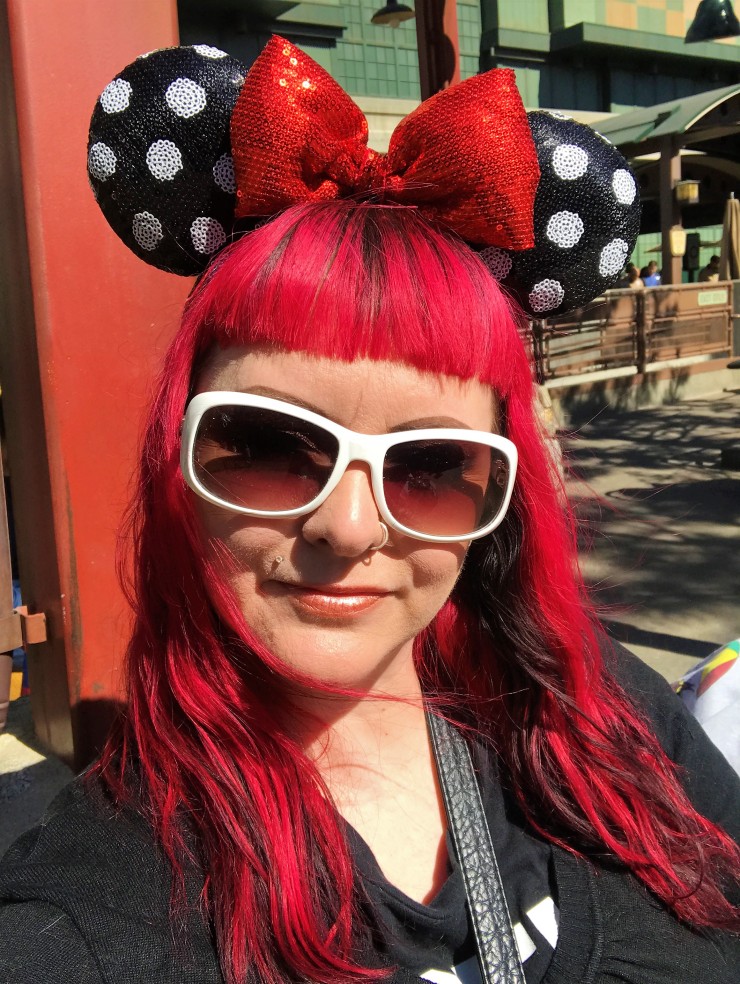 For more blogs, check out the original Dazzling Disneyland and reviews of the other “lands” of Disney!