The next leg of my adventure begins at 6am, leaving my hotel in Delhi for the airport. But when I get there, I find out my flight is an hour early. I just make it on time! Meltdown avoided!!

Arriving at the airport in Mumbai, I hire a prepaid taxi and prepare to spend hours in traffic to get to my hotel in the neighbourhood of Colaba-a central tourist area. We finally pull up to Treebo Garden hotel; a lovely little hotel down a quiet road lined with trees. 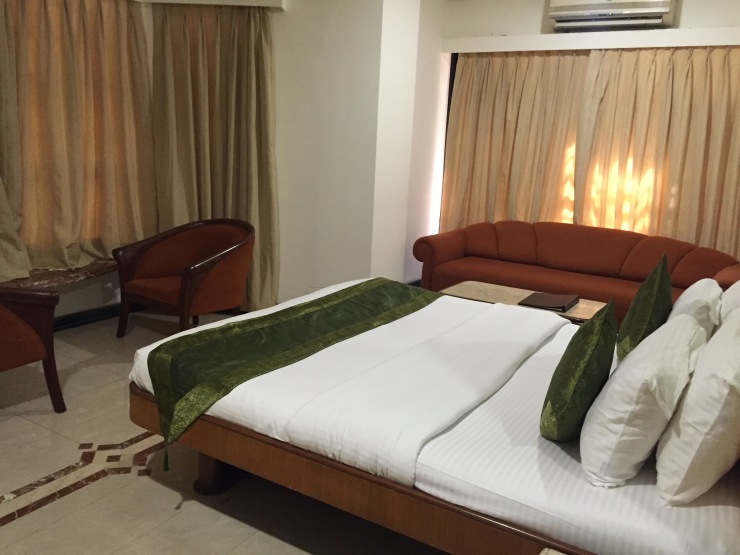 I’m escorted to my room, and the guy is trying to show me everything. And he won’t leave. I’m like, ok I’m good..THANKS!! Hahaha. Interesting tidbit: it’s very rare to see a woman working in any hotels in India.

My room is spacious and clean, and I settle in for a day of doing absolutely nothing. I need the time to unwind and regroup for my final week in this crazy country. I do venture out in the evening for dinner-the sister hotel next door has a beautiful rooftop patio and I’m feeling like some Indian food.

I decide on veggie biryani; a spicy rice and veggie dish mixed with a type of yogurt which helps to calm down the spiciness and add extra flavor. It is fantastic!

The next morning, I venture out to explore. Mumbai, formerly known as Bombay,  is India’s wealthiest and largest and city with a population of around 18.4 million. It is the home of Bollywood, and if you’re in the right place at the right time, you can work as an extra on set for the day. Since Mumbai is built on an archipelago that used to be seven islands; there is alot of coastline along the Arabian Sea.  A short 10 min walk from my hotel,  I arrive at the stunning Gateway of India.

It is a monument on the edge of Mumbai Harbour, built to commemorate the arrival of King George V and Queen Mary in 1911. It is also seen as an important symbol of British colonial rule in India. You also may recall this site being the centre of a few terrorist attacks; the most recent in 2008 when 4 gunmen entered Mumbai from the Gateway and bombed the Taj Mahal hotel and a few other sites in the city. Security has been beefed up since then.

I decide to visit Elephanta caves this morning, and this requires a ferry ride out to Elephanta Island. First I need to buy a boat ticket. I find an older man selling tickets and the exchange goes as follows:

Me: How much for the ticket

Man: <now has change to give me>

Anyway, I hop on the ferry and after an hour arrive at Elephanta Island. The caves are a UNESCO World Heritage site (I tick another off the bucket list).It’s a bit of a hike from the dock to the actual caves. The island looks lush and green with many tropical trees, and the sun is unforgiving today. A mini train takes me along the docks to the steps leading up to the caves; the local dogs run alongside the train.  The steep steps are lined with vendors selling souvenirs and beverages, and luckily there is a blue tarp overhead to block out the blazing sun. I take it slow, but of course I’m exhausted by the time I reach the top of the 120 steps.  The main cave, also known as Shiva cave is seriously amazing.

It dates back to between the 5th and 8th century and was only recently renovated 45 years ago after years of neglect. Shiva cave is 130 square feet; supported by massive pillars. Upon entering the cave, the air is damp and the only light is sunlight peeping through the entrance. It’s so peaceful and quiet inside, and I feel the richness of the history that surrounds me.

The walls are carved with different representation of Shiva. Some carvings are in great condition, while others show their wear.  I take my time wandering around and admiring the statues and carvings. 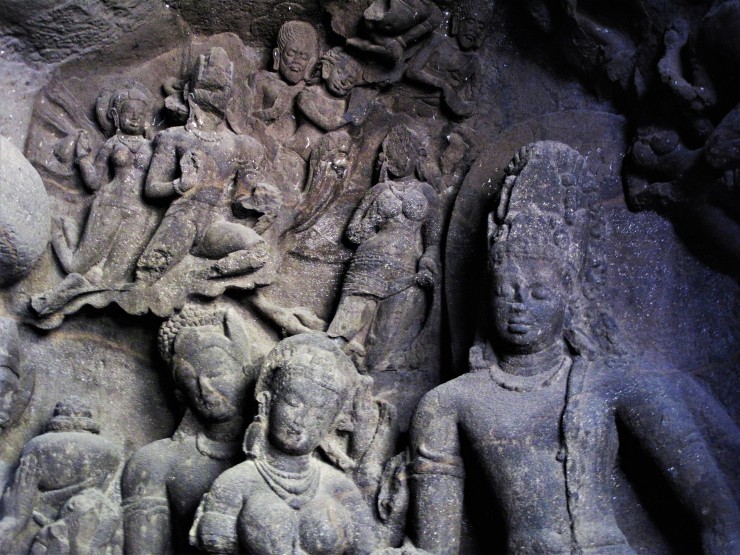 Absolutely one of my favorite sites I’ve seen so far in India.  There are also a few lesser caves around the back of the complex so I have a quick look. This is where all of the monkeys are hanging out! I watch them for a bit, and I remember I have a plantain in my bag.  As soon as I gesture towards opening my bag, I have a ton of monkey eyes on me and a few come over. A young one starts jumping in the air to grab it out of my hand, and he bolted off to enjoy his treasure amid sounds of angry chatter from the other monkeys. 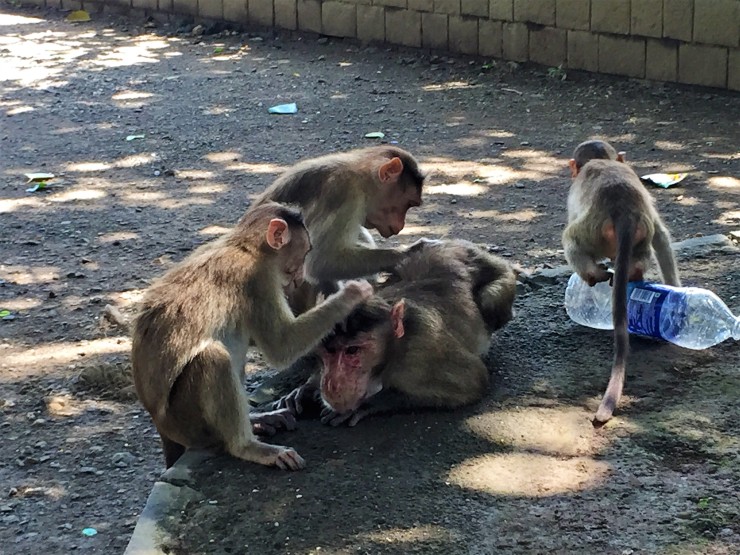 The ferry ride back to Mumbai is a nightmare. First, it is packed with tourists and little room to sit. Second, the water is really rough, so the boat is rocking up and down; water is splashing into the boat. I’m not a big fan of getting sick, or of capsizing.  I end up sitting beside a really nice couple from Jaipur and I think the man can sense that I am frazzled. Our conversation distracts me from my (maybe irrational?) fear that the boat is going down. Safely back on land, my next stop is the Taj Mahal Palace Hotel which is one of the fanciest and most recognizable in India.

Since I can’t afford to stay here, I decide to be swanky for an hour and go inside the lounge to enjoy a pricey beer while enjoying views of the harbor. This hotel was the location for a Pakistani terrorist attack in 2008 that lasted 3 days. There were many hostages taken, and loss of life was almost 200 people.

I have the rest of the afternoon free and I’m not sure what to do, so I hire a driver to take me to some attractions. One thing I’m not excited about….TRAFFIC.  We drive along the coast and have a quick stop at Chowpatty beach, a popular hangout of the locals. 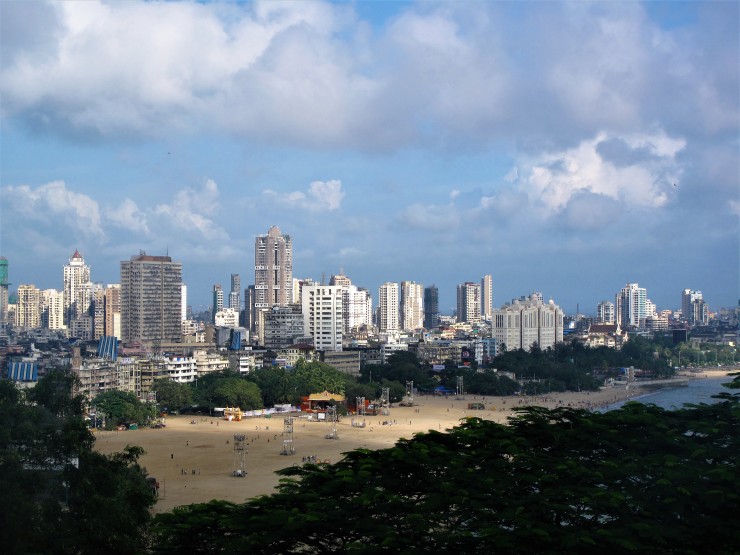 Then over to the Hanging Gardens, where I swear I’m the only tourist. It is a pretty walk among the gardens and the animal shaped hedges, and I watch the locals relax and play.

Across the street is another park and here is where you’ll find the Old Woman’s shoe, a large structure inspired by the nursery rhyme. 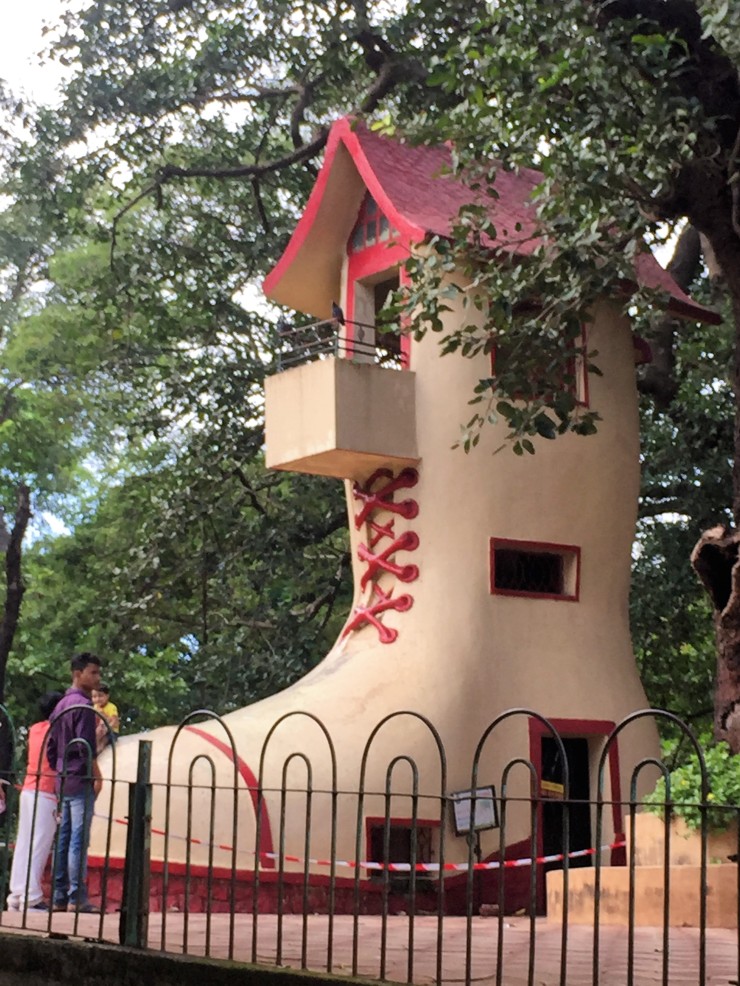 I’m not really sure of the significance, but it is quite famous here.  I really want to go to Haji Ali, the mosque that’s on an islet off the coast but my driver Satinder says that women are not allowed to go in. I try to explain that I’d at least like to walk up to the outside, but I think he is being lazy about taking me there.  Entrance is also affected by the tides, so maybe that is the reason? 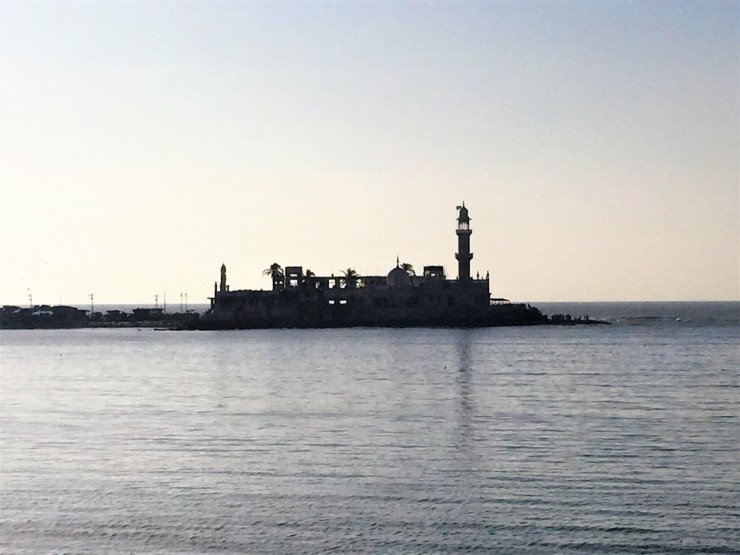 I have to settle for a picture from the mainland.

My last stop of the day is Dhobi Ghat, the world’s largest open air Laundromat that takes linens from Mumbai’s hospitals and hotels. I observe from the bridge that runs overtop; I missed the washing part which takes place in the morning but I’m able to see what’s hanging out to dry. It’s a colorful sight.

I am also surrounded by at least 10 kids who are trying to get me to buy stuff from them. They’re cute, but it is annoying.  After this long day, I retire back to the hotel, order room service, and turn the lights out early.