This morning I take a taxi to a nearby train station to meet up with my guide from Reality Tours and Travel, for a tour of the Dharavi Slum. His name is Guarav. We take the local train; it’s very clean and not very crowded. 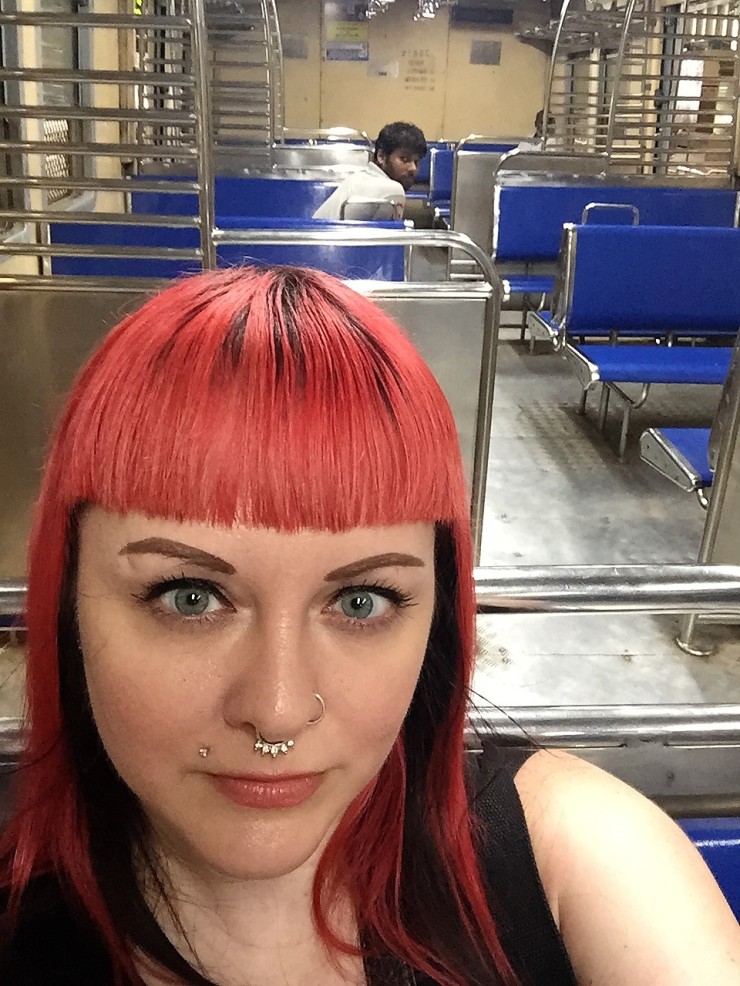 I ask him if I can hang off the side of the train, like I see locals do. Haha probably not a good idea.  We meet up with a few other people, and begin the 2 hour walking tour of one of the largest slums in the world with a population of close to 1 million people. It formed in 1882 in British colonial times; the Europeans and Indians were segregated by residential areas.  Mumbai was becoming overpopulated and industry was contributing to pollution and unsanitary conditions.  The government moved polluting industry and natives to the edge of the city, creating Dharavi slum. The area grew rapidly, and eventually became its own fully functional town with mosques, schools, and industry.  Today it is a highly functional slum; they make leather, textiles, pottery, and more recently it’s become a massive recycling centre. The revenue coming out of the slum is worth millions of dollars.

Out of respect for the inhabitants, we are not allowed to take pictures. I will admit I had a preconceived perception of what I thought a slum would be like, but this definitely surprises me. Yes, it’s crowded. Yes, it’s not the cleanest place. Yes, the living conditions are modest. But the people seem happy, everyone is friendly and you get a real sense of community. I ask Guarav why people continue living in the slums even though they have decent paying jobs here.  He tells me that this is still a cheaper option, they are used to living here, and there is a commitment to the generations of their families that have lived in Dharavi. Guarav himself is from a nearby slum.

Guarav takes us through the super narrow corridors, stopping at different shops to see what’s going on. At one point; we climb up a steep ladder onto a rooftop to overlook the area. In regards to climbing the ladder, I’m not super happy that I chose to wear a skirt today-luckily my skirt is ankle length! But not so lucky that it is ankle length when I’m walking through numerous puddles.  At one point, we duck down a couple of super narrow corridors that don’t get much sunlight. This is where there are some homes, and we can see inside…it feels a little peepy, but everyone smiles and says hello. Back onto the main thoroughfare, the street is bustling with trucks, carts, animals, and people selling their wares. It feels like a whole other universe, and I’m so glad I have the chance to explore a Mumbai slum.

My next stop is an absolutely stunning building and UNESCO world heritage site known in English as Victoria Terminus (VT). 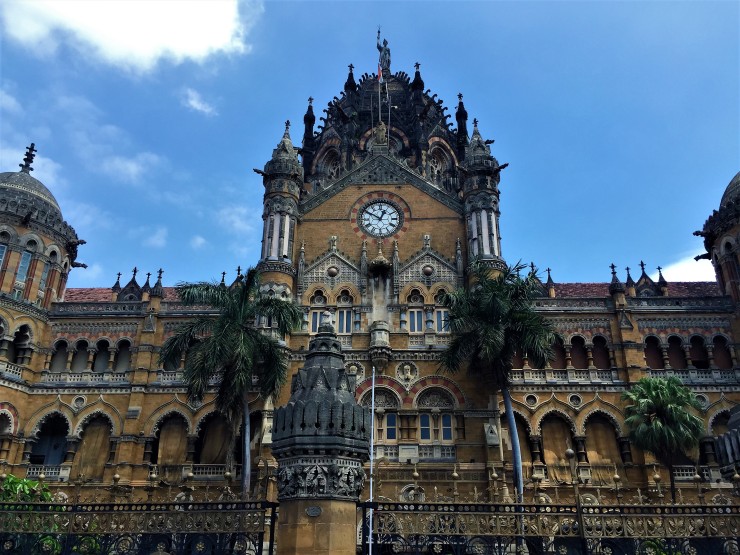 Also known as Chhatrapati Shivaji Terminus railway station. It is one of the busiest train stations in India. 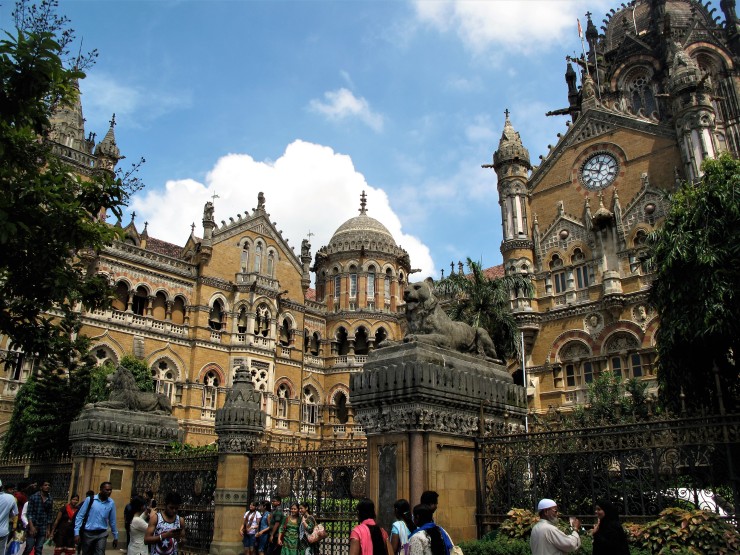 I can’t stop taking pictures of this place; the design is Indo-Gothic and it is beautiful.

Across the street, I spot a McDonalds-the first one I’ve seen in India so far. The challenge is that beef is not widely consumed in India, so you will not find beef burgers on the menu. You’ll find chicken, lamb, veggie burgers. And the Big Maharaj Mac. 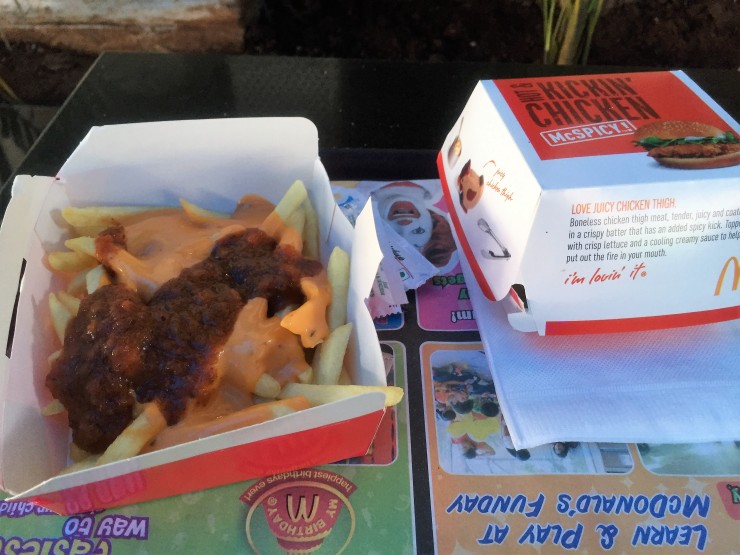 I decide to give it a go; ordering a chicken burger and the “nacho fries”. Yeah, the whole thing is pretty gross.

I continue my walk to the Prince of Wales museum. The museum is located inside a beautiful garden surrounded by palm trees, and is that typical gothic style architecture.  Most of the exhibits represent ancient Indian history. I put on my headphones and do the audio tour. There’s alot of cool artifacts, statues, textiles, coins and art. 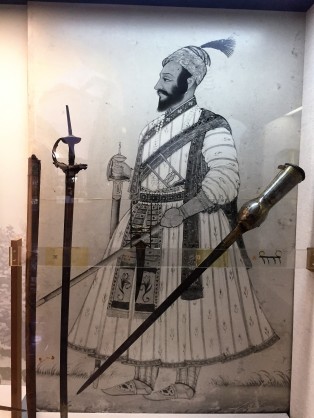 There is also a massive group of young Indian students doing a school tour, and they are loud and all over the place. Even the headphones don’t drown out the noise.  Haha nightmare! I go the opposite way to shake them.

I walk back to my hotel, and it is much closer than I’d realized. I end up back at the Gateway of India. Seems like I’ve come full circle, as my exploration of Mumbai has come to an end. I head back to the hotel and chill in the lounge until I have to leave for my next flight for the final leg of my adventure…..