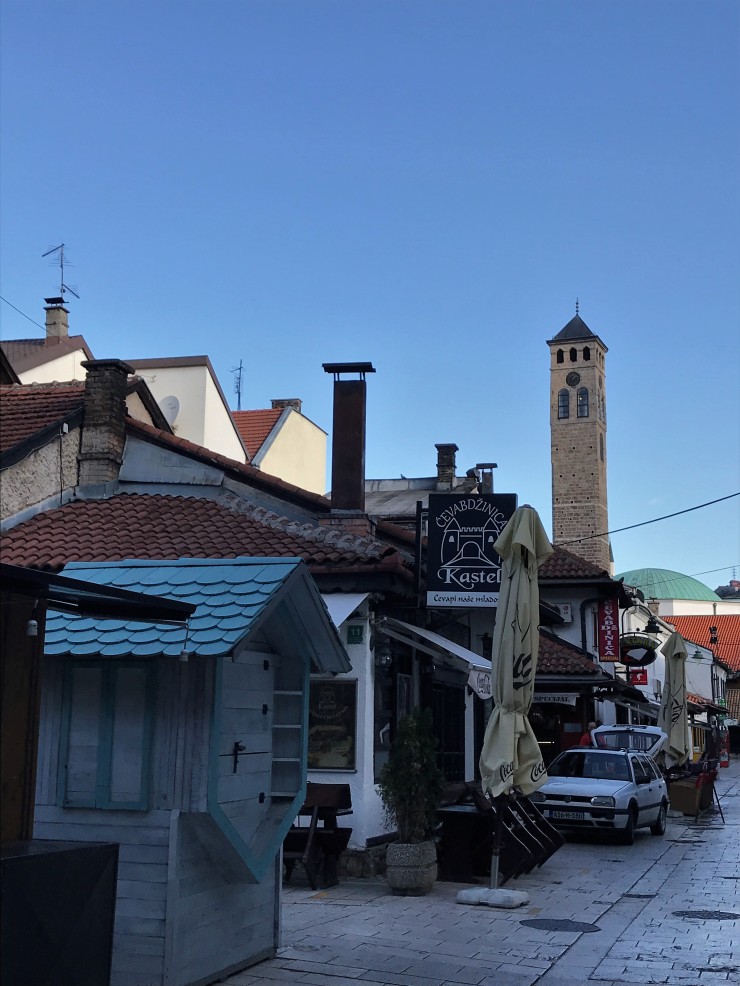 A lovely morning in Sarajevo as I head out to fetch a coffee and pastry. The streets are quiet, the air is crisp and I can see the Old Sarajevo Clock Tower(also known as Little Ben) standing tall above the Old Town. It is the only clock in the world to keep lunar time, and must be reset every few days. The purpose is so that locals can time their prayers.

Muhamed is back, and this time we hop on a bus and take a 30 min drive to the Sarajevo Tunnel. It was built during the Bosnian war as a means to provide food, humanitarian aide, weapons, and an escape for people trapped in the city while it was under siege. There was conflict over Bosnia becoming independent; it was greatly opposed by the Serbs. The Serbs and Croats clashed with the Bosnian Muslims and wanted to claim parts of the country for themselves; militias were then mobilized throughout Bosnia. The entire city of Sarajevo was surrounded, with bombs and bullets raining down on the people every day. 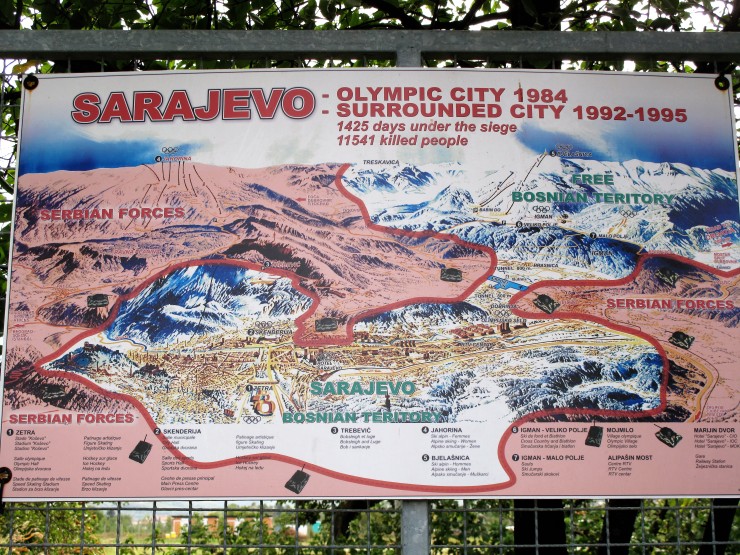 The tunnel was constructed in 1993 through the cellar of  an unsuspecting house,  and it extended into Bosnian held territory close to the airport…an area also controlled by UN forces. 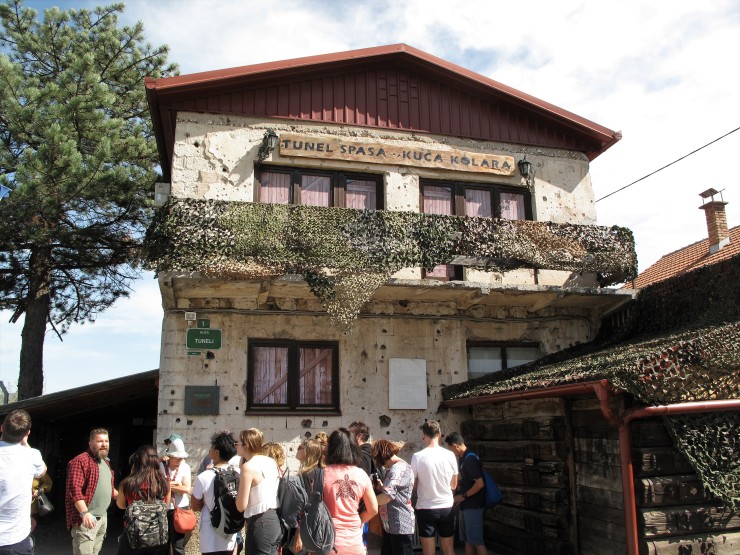 It was dug completely by hand, using shovels and picks, taking almost 4 months to complete. 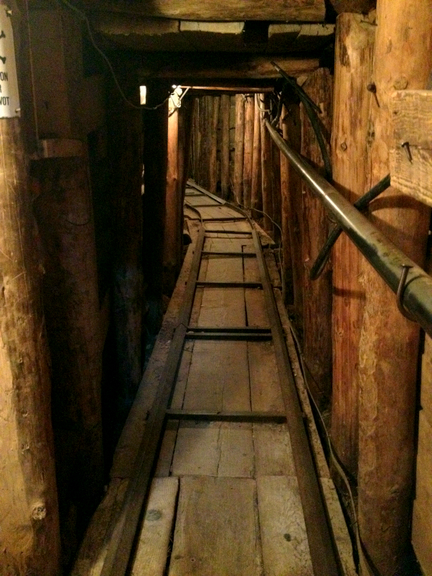 The tunnel  often flooded, air quality was poor and it was difficult for the men to be bent over carrying supplies through the tunnel.  There are a couple of Sarajevo roses close to the house, which shows the Serbs had an idea that something was here…but they were not successful in destroying it. 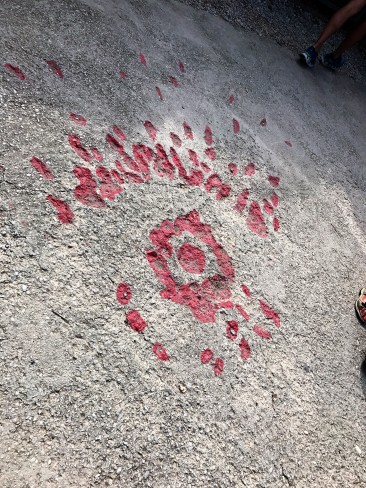 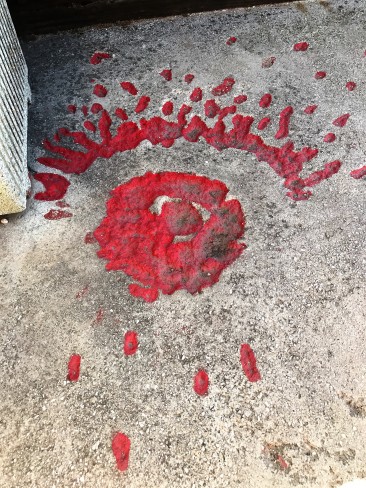 We sit and watch a brief movie about its history, have a look inside the museum and walk through a short part of the Tunnel.  Muhamed tells us a story of his close call, with the deep scars on his legs to prove it. It was dangerous to be outside, so most people tried to stay hidden.  As a child, Muhamed snuck outside to play and was hit by shrapnel  from a nearby explosion. Every day was unknown…will you have any water or food? Will your family return home? Will you have heat or electricity? Every day was a struggle.  The official death toll is 11, 541.

“It was just a lesson, not a life sentence”

This site is one of the most important and popular in Sarajevo and must be visited!

As we drive back through the city, we can see remnants of a war torn city; large explosion and bullet holes in buildings, and some structures that were bombed beyond repair…their skeletons still remain today. 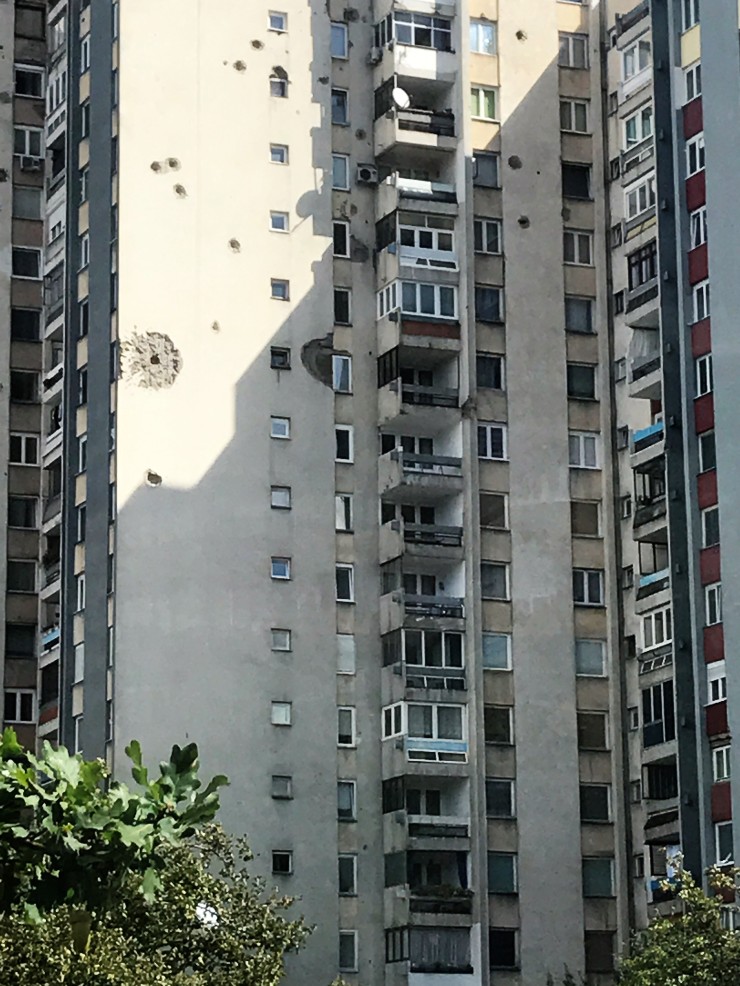 We drive through Sniper Alley, the main boulevard that was lined with snipers hiding in high rise buildings, shooting at civilians below.  They wounded over 1000 people, and killed 225  – many being children. I wondered why people would run down this street, knowing what could happen.  But when they needed food or water, it was worth the risk.

We drive back into the Sarajevo Valley, but this time we drive up to the Yellow Bastion. The bus drops us off and we walk the rest of the way up. This former fortress offers amazing views of the city below. 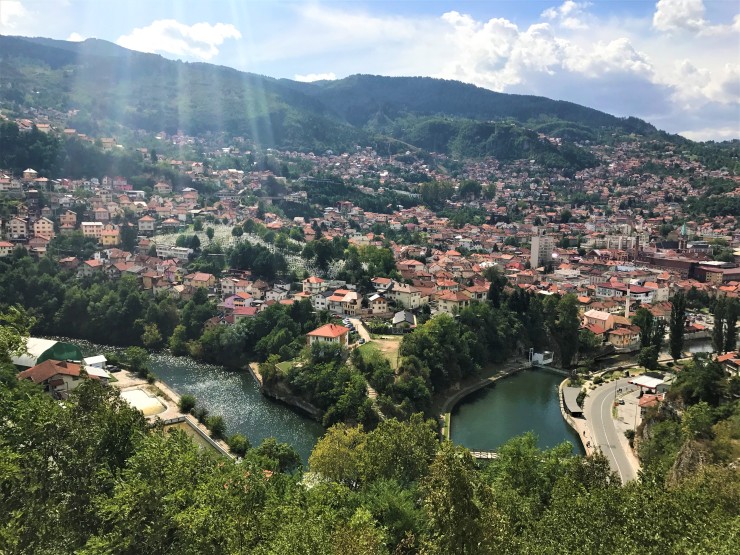 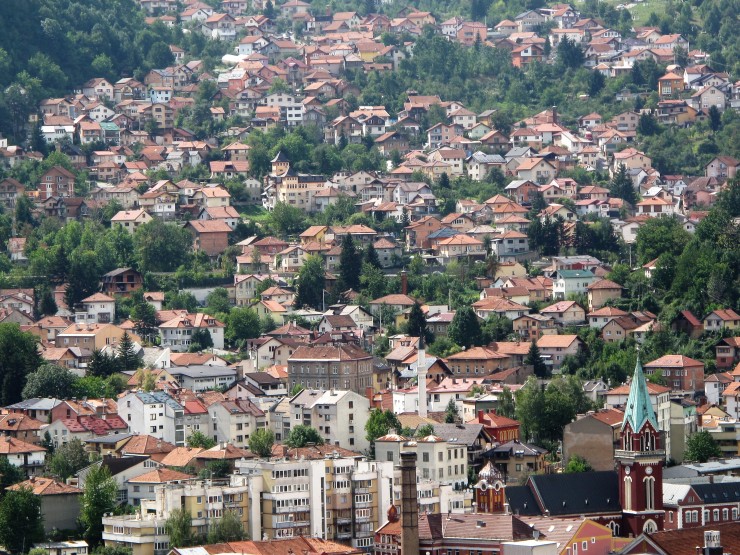 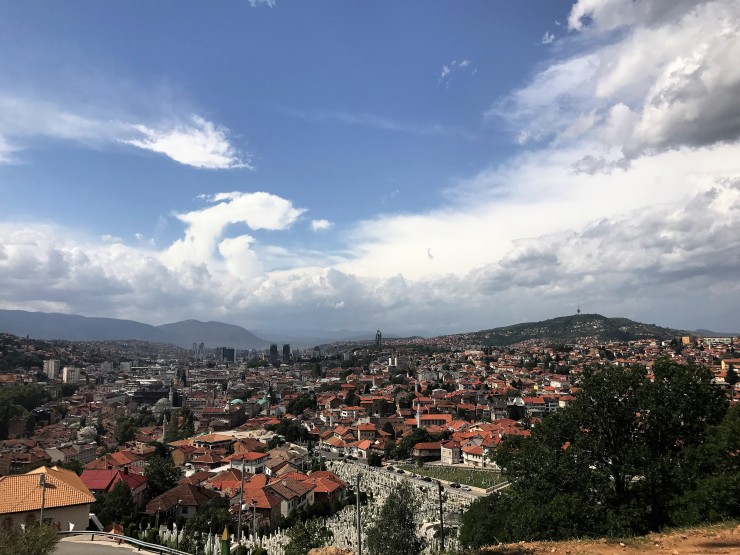 There are some nasty storm clouds rolling in, and the wind picks up. Like the wind is ridiculously strong up here. It almost blows me off the ledge I was standing on. No joke. Plus, I am wearing a dress today and it would blow up over my head if I wasn’t desperately holding it down.  Fun times! I get to chatting with Muhamed, and I ask him if he’d be interested in going for a beer this afternoon.  I really want to check out the brewery, Pivnica HS, but as we walk up to the door we see it is closed. So, Muhamed has another place in mind. It is called Barhana, and we find a cute picnic table outside to enjoy our drinks. Well, those storm clouds start to do their thing, and we are almost caught in the downpour/thunder and lightning! Safe and dry inside, we order rakija…the potent fruit brandy that I first tried in Serbia.  Vid shows up too, and we say Zivjeli(Cheers!), as we toast to new friendships. Nothing better than chilling with my two favorite boys from the Balkans! 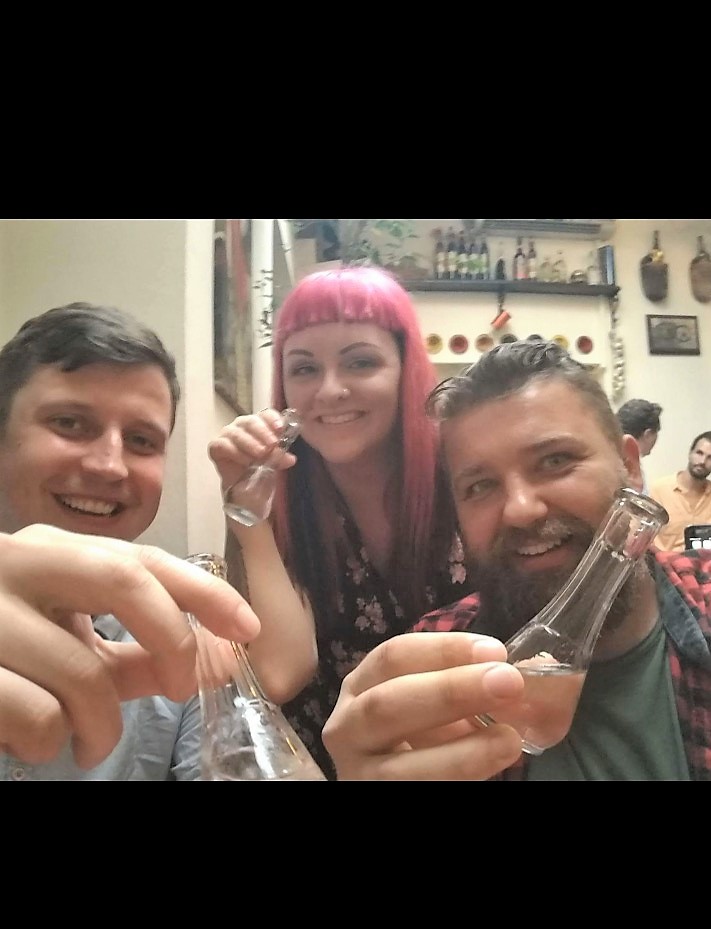 I decide to spend the rest of the afternoon wandering around and exploring and, being the awesome tour guide he is, Muhamed offers to join me so I can get his inside scoop. 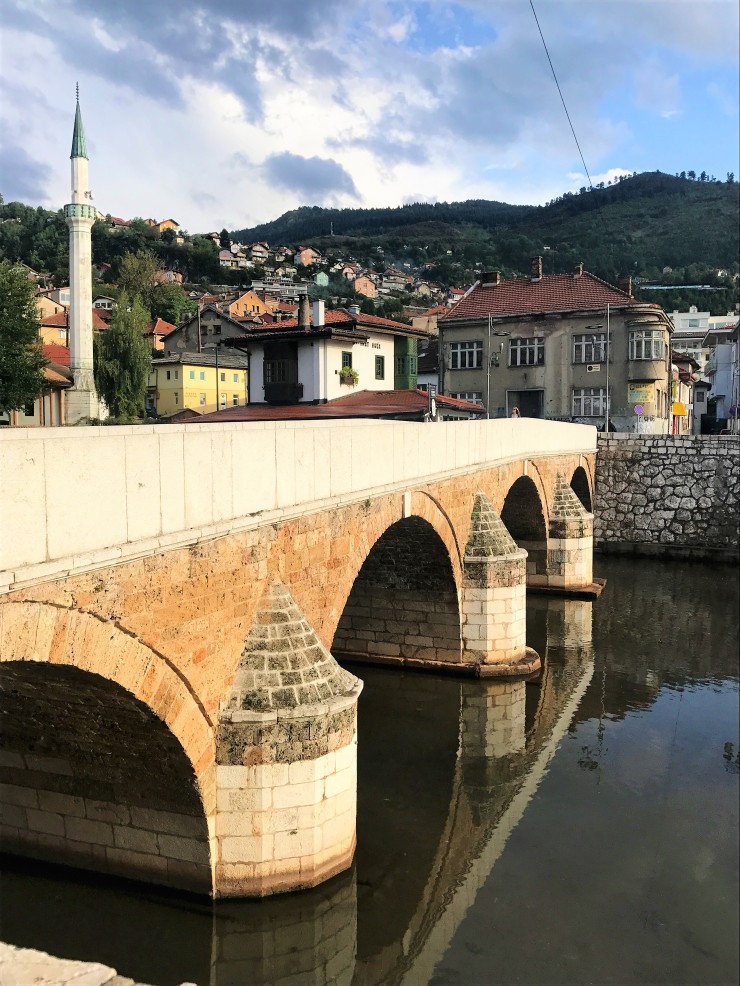 The air smells fresh after the two hour rain storm, and we stroll alongside the Miljacka River taking in the views from the Latin Bridge. 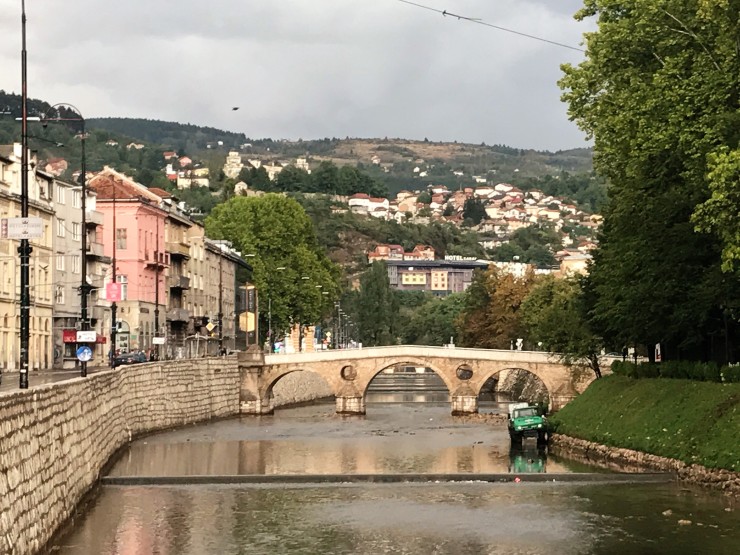 The Vjecnica, or Town Hall is a beautiful Austro Hungarian style building. It was destroyed during the war and was recently rebuilt and reopened to the public. Unfortunately, all of the books and documents were lost in its destruction. 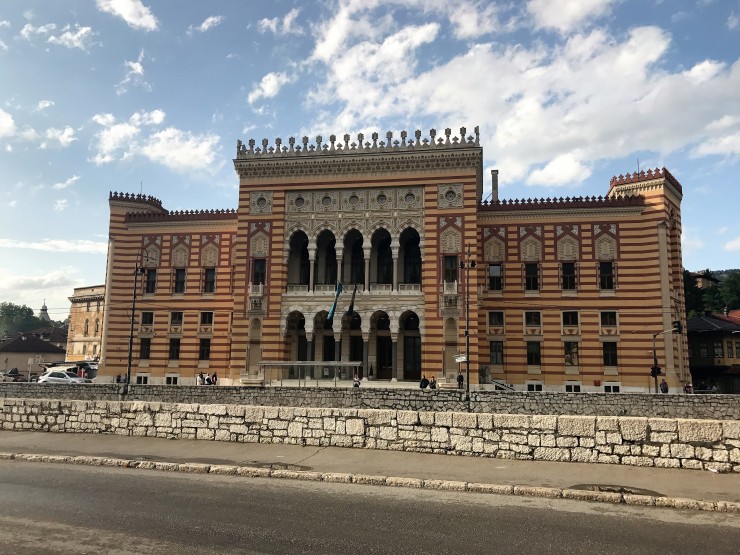 Other notable buildings we pass are the Central  Post Office and the Academy of Fine Arts.  A pristine white building with a large green dome on top, this place was once an Evangelistical church that now functions as an educational facility. 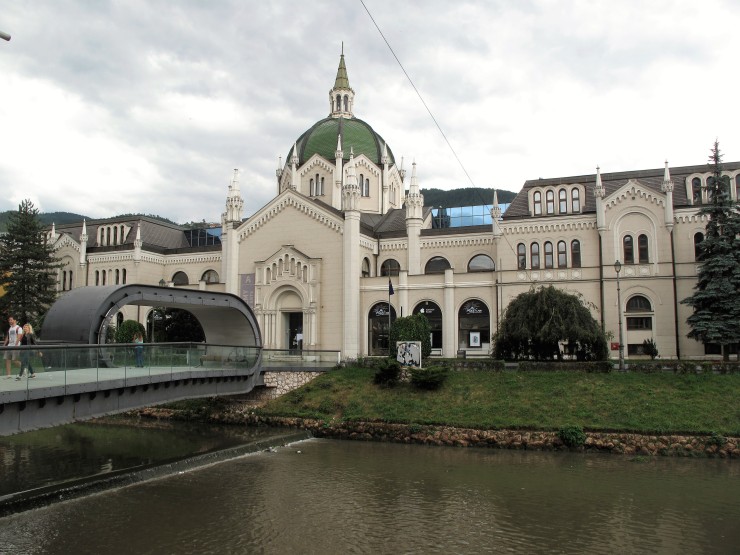 The modern looping bridge out front was designed by a few of the students. We head back into the old town, and we wander to a spot where another Sarajevo rose lies on the street. 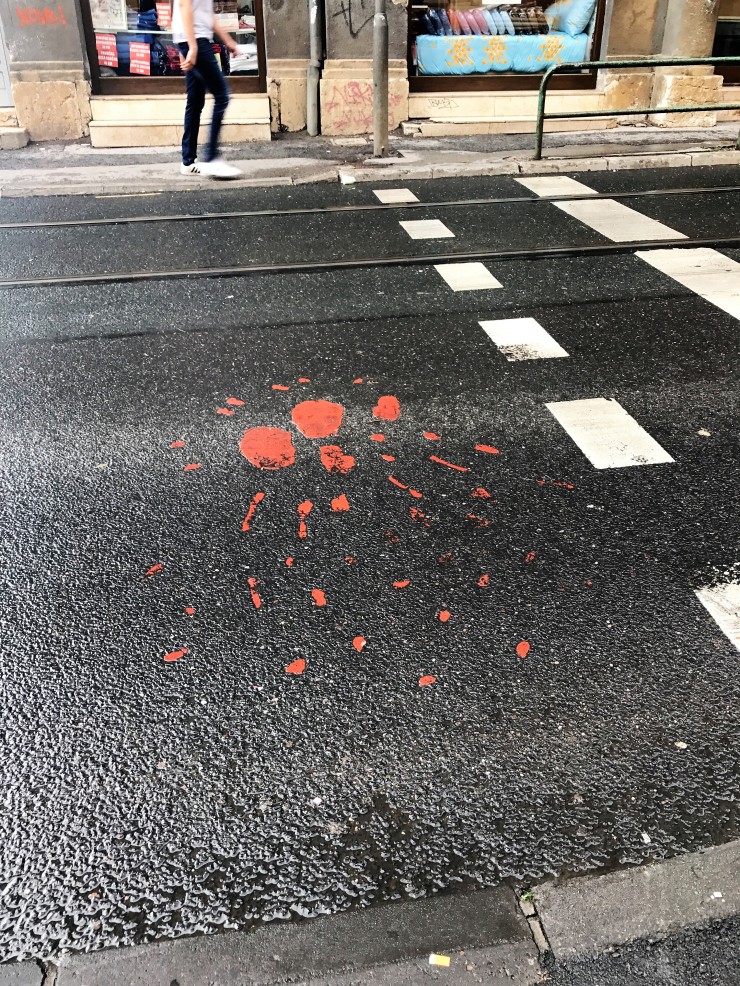 It is close to where the market was, and this explosion killed many people.  Finally we come to the Eternal Flame, a burning light that sits in a cross section of two streets in the centre of Sarajevo. It is a memorial to the military and civilian victims of World War II in Sarajevo. 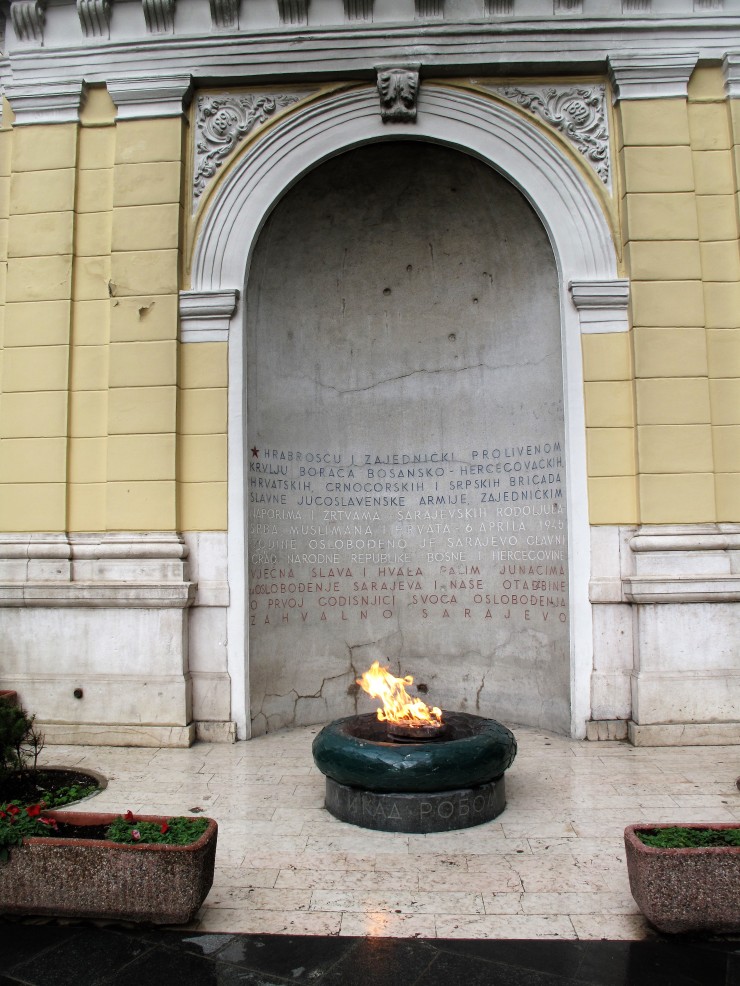 It is time for me to go off on my own, and explore the Bezistan..the ancient bazaar that was part of the Gazi Husrev-beg Mosque complex. It is built slightly underground so it is nice and cool inside. 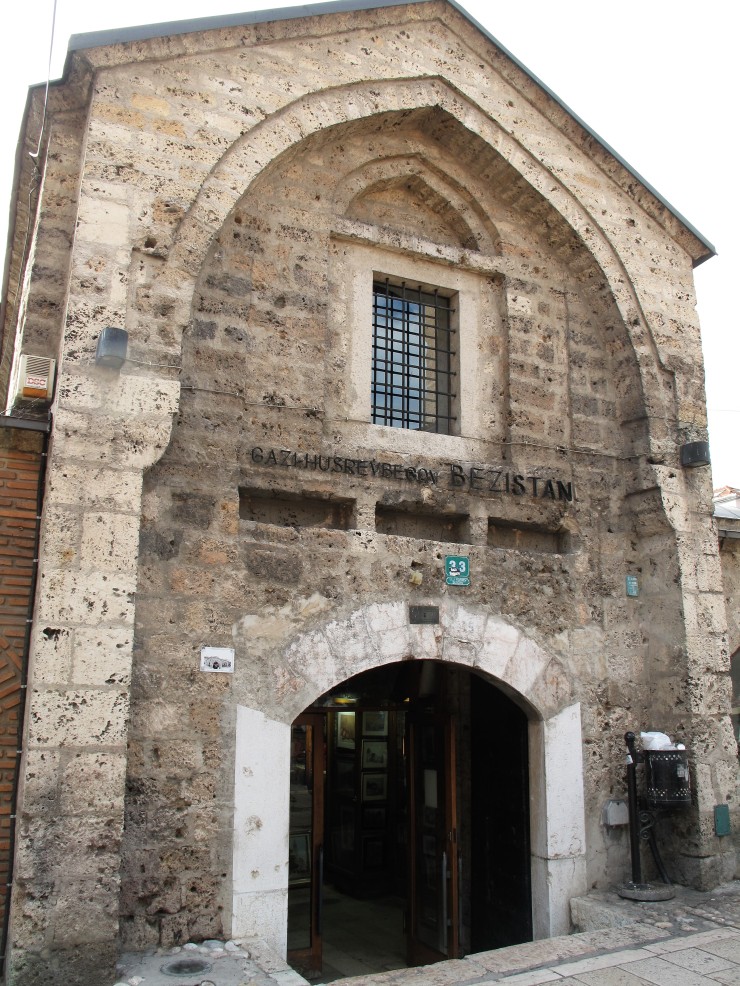 The market is known for its knockoff handbags, and it’s also a great place to find jewelry, clothing and other souvenirs.  Just before heading back, I decide to finally try Bosnian coffee. I have been hesitant, as I do not have a great relationship with caffeine. I’m told the best place to try it is Miris Dunja, a small café on a side street close to the mosque. The waiter brings a small tray to the table…it has a tiny copper pot with a long handle, a small mug, two sugar cubes and a piece of Turkish delight. 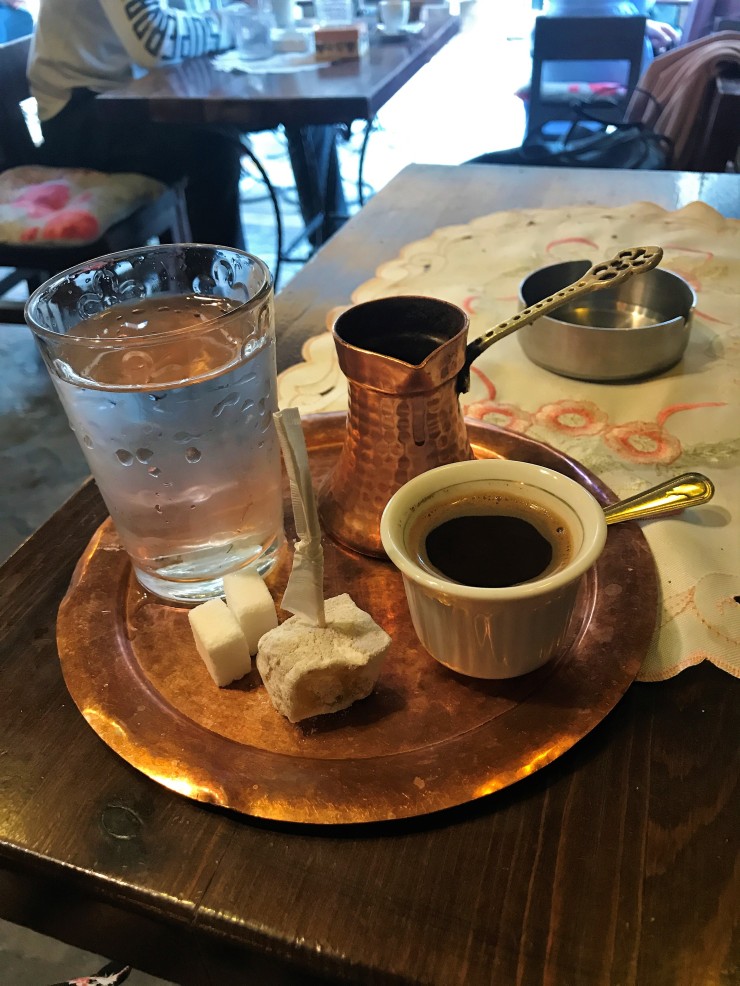 Don’t over pour…all of the coffee grounds sit on the bottom of the pot and you don’t want to drink that! It tastes amazing, and it doesn’t bother my system at all so I’m thankful.  I head back to the hotel to change and then it’s off to meet the boys to watch the Eurobasket final between Slovenia and Serbia. Slovenia ends up winning, and Vid is ecstatic. Lots of beers are consumed. A fun way to end my time here in Sarajevo.

Being here was truly a moving experience…so much history, so many stories and such a beautiful city. I highly recommended everyone to put this country on your bucket list…you will not be disappointed! 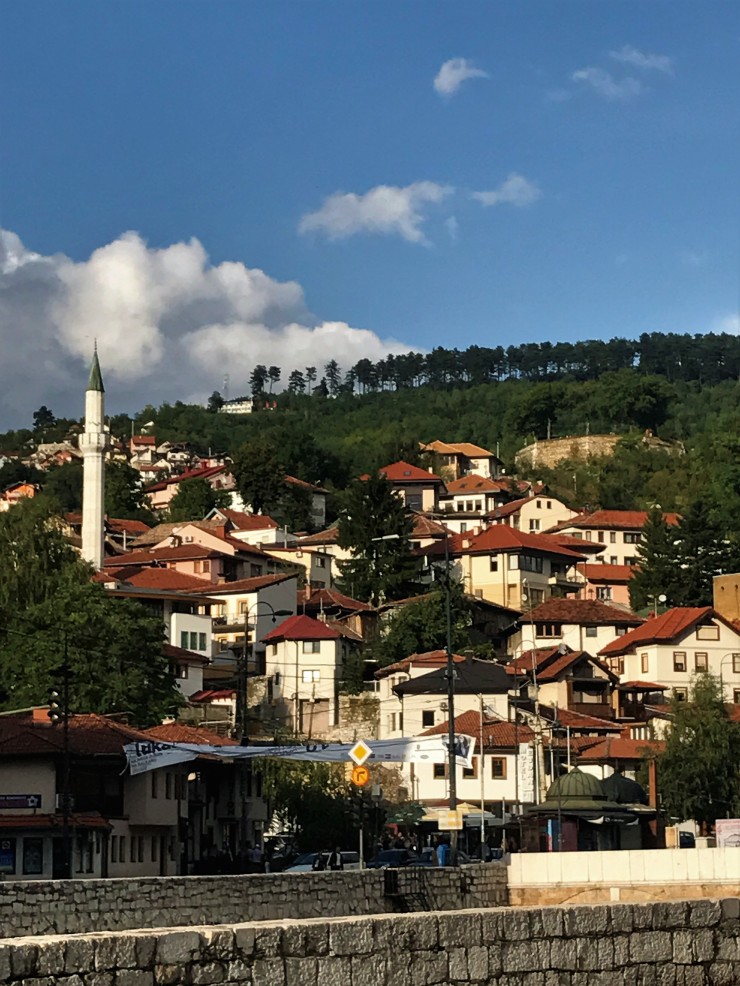