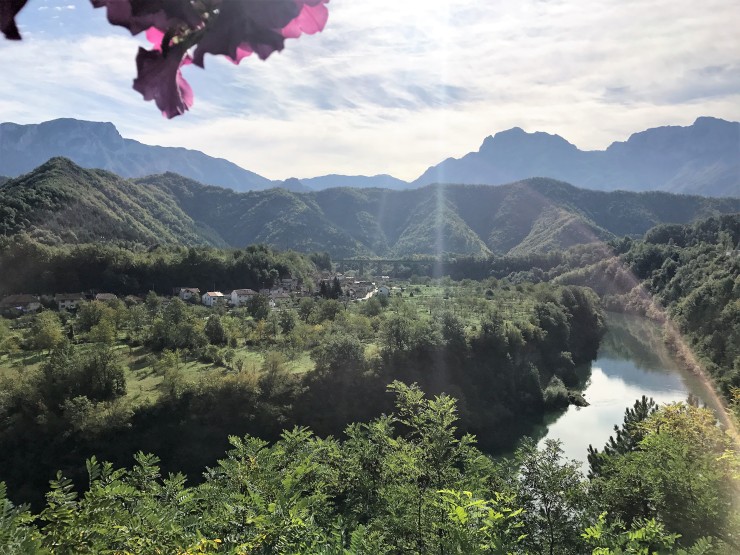 Today we take a bus to the southern part of the country, into the Herzegovina region. We are on our way to Mostar, the most important city in this region.  It is situated on the Neretva River; the famous Old Bridge(Stari Most) is the main reason to come visit this city. The name Mostar is taken from the bridge keepers(called Mostari) who kept watch over this bridge. We will only spend a few hours here, so time to get moving! It is a short walk from the bus station to the Old Town, and man, it is hot as balls out here today! Apparently the temperature has been as high as 52C this past summer. Yikes!

The area is quaint, with narrow cobblestone streets that are currently swarmed with tourists.

There are many cafes, and shops with copper plates and coffee sets on display. It feels like I’m in a fairytale land! My first view of the bridge takes my breath away..a single arch stone bridge that stands high above the Neretva River.

Stari Most was built in the 1500’s, but was deliberately destroyed during the Bosnian war. It was rebuilt and reopened in 2004, becoming a UNESCO World Heritage Site.  The bridge has quite a curve to it, and it makes it difficult to walk on the cobblestones…be careful…it is so slippery. I nearly wiped out a few times!  Make sure you wear proper footwear.

On the other side, I walk down to the river and put my hands in the emerald green water. It’s very cold, despite the intense heat today. I’ve read it’s one of the coldest rivers in the world! 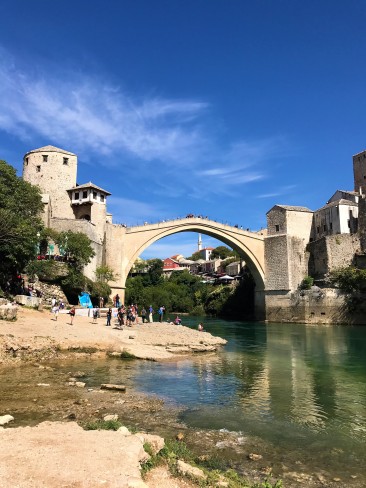 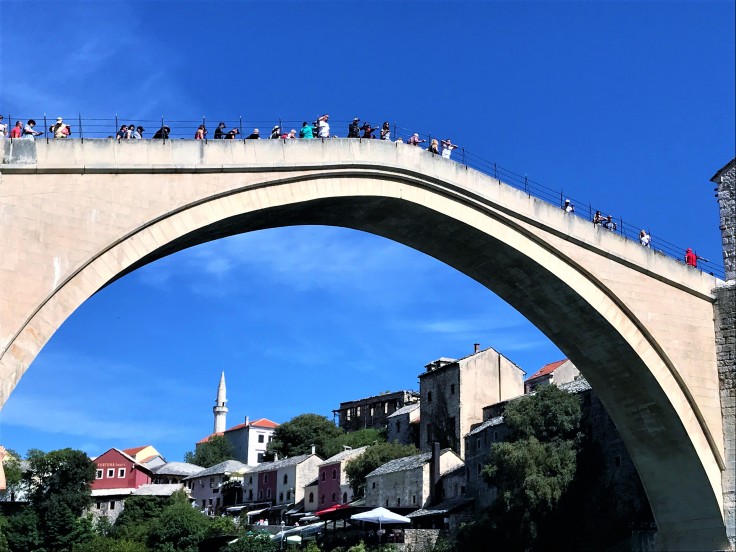 After taking heaps of photos, I head back up to find the crooked/sloping bridge called Kriva Coprija. It was built as a trial before attempting to build the much grander Stari Most. 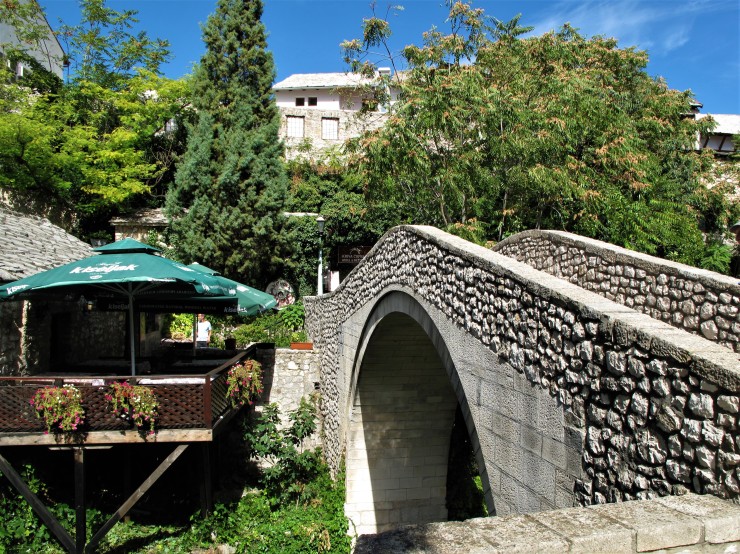 There is no one over here so I can enjoy the surrounding scenery in peace, the brick buildings surrounded by lush greenery. As I head back to Stari Most, I can see there’s a bit of a commotion stirring. This can only mean one thing…someone is about to jump off the bridge! Don’t worry though – these are professional bridge jumpers who take donations to make the 24m leap.

It can be dangerous, and people have died attempting this feat.  The river below is cold and currents are strong. If you’re up for the challenge, you can train with these guys to make the jump and they’ll give you an official certificate after……. if you survive.

My last stop today in Mostar is the Koskin Mehmed Pasa Mosque.  It was built in the 1600’s and like so many other buildings, was damaged and rebuilt after the war. 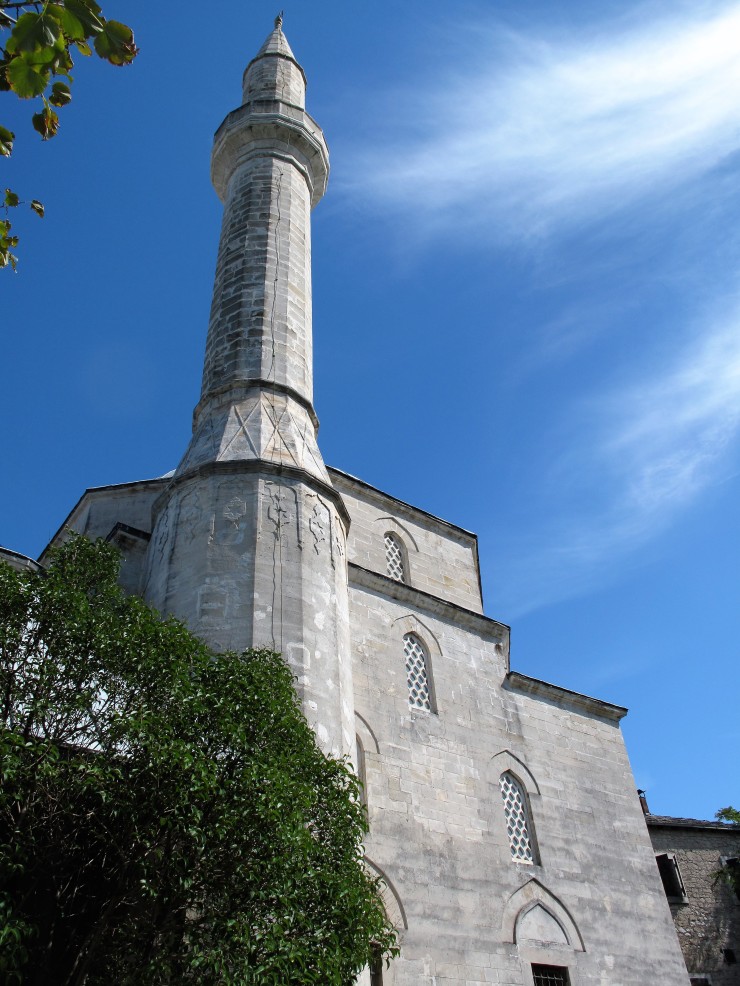 You can look around inside the mosque for free but there is a fee if you want to climb up the minaret.  I decide to give it a go…. it’s a ridiculously narrow round stairwell with 89 steep steps. I’m not in the best of shape and I’ve been having trouble with one of my knees so this is a challenge. Plus, it’s hard NOT to get claustrophobia in there. 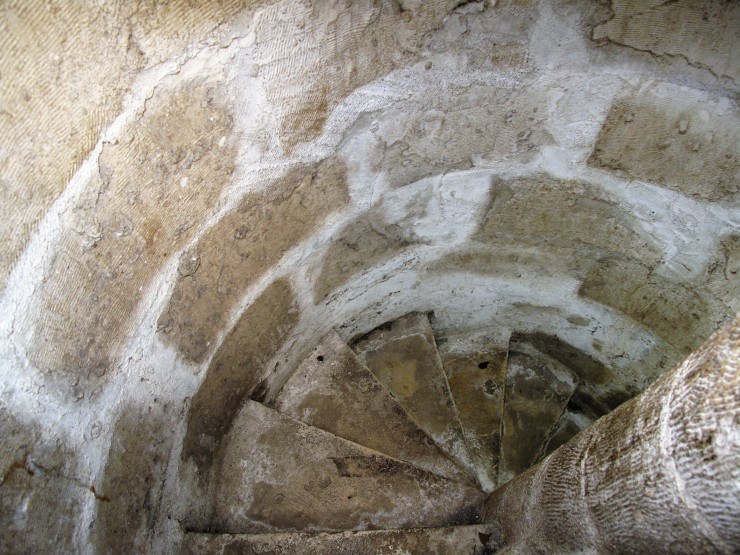 It’s hot, and the spiral staircase is making me slightly dizzy. I make it to the top and wow, the views are amazing.

It is worth the effort and panic(I seriously did experience short bursts of panic in my ascent and decent ..hahaha).  If I had more time, I would have loved to visit the Old Bridge Museum and War Photo Exhibition, two very notable attractions here in Mostar.  After all of this action, I find a nice restaurant with picnic tables outside. I order cevapi of course, and this is the tastiest version I have eaten on this trip. It’s accompanied by a shopska salad, which is similar to a Greek salad.

I recommend spending a full day here, so you can take in all of the sites and enjoy the city without being in a rush. I would have liked to wander out in to the other parts of the city and see some of the remnants of the war, like the Sniper Tower.  Mostar can be easily reached from Sarajevo, Montenegro and Dubrovnik.  A small town with big history, Mostar needs to be on your bucket list!

This is a text widget. The Text Widget allows you to add text or HTML to your sidebar. You can use a text widget to display text, links, images, HTML, or a combination of these. Edit them in the Widget section of the Customizer.
%d bloggers like this: