In early 2018, I visited Los Angeles with my mom and sister. We spent 3 days in L.A., and 3 days at Disneyland. We did a lot in a few days, but a few more days would have been ideal!

One of the best ways to do some sightseeing in LA is the Hop on Hop off bus. Los Angeles is a massive city, so some of the routes on the bus are quite long. The Hop on Hop Off gives you a ride, plus it offers history and fun facts if you choose to wear your headphones and connect to their on-board entertainment.

I recommend only doing 2 loops per day, given the large distances. It takes around 2 hours to get to the coast from Hollywood and some loops require a change of buses. The loops are color coded, and will get you to all the major attractions in LA, such as Hollywood, Santa Monica, Downtown LA, Universal Studios, Venice Beach and the airport(LAX).

Sitting up top of the double decker bus offers the best views, but if you’re visiting in the winter it can get cold and windy up there!

If you need to travel shorter distances, UBER is the way to go. We downloaded the app and never waited more than 15 minutes for a driver to arrive. Using the app meant we didn’t have to pay the driver in cash…all fares and tips are through the app. We had fantastic drivers…some with really cool stories. We used UBER to travel from Anaheim to LA, from LA to the airport, and when we were out and about in LA.

We tried to find a reasonably priced hotel in L.A.;  not the easiest task. We ended up choosing Studio City Courtyard Hotel. 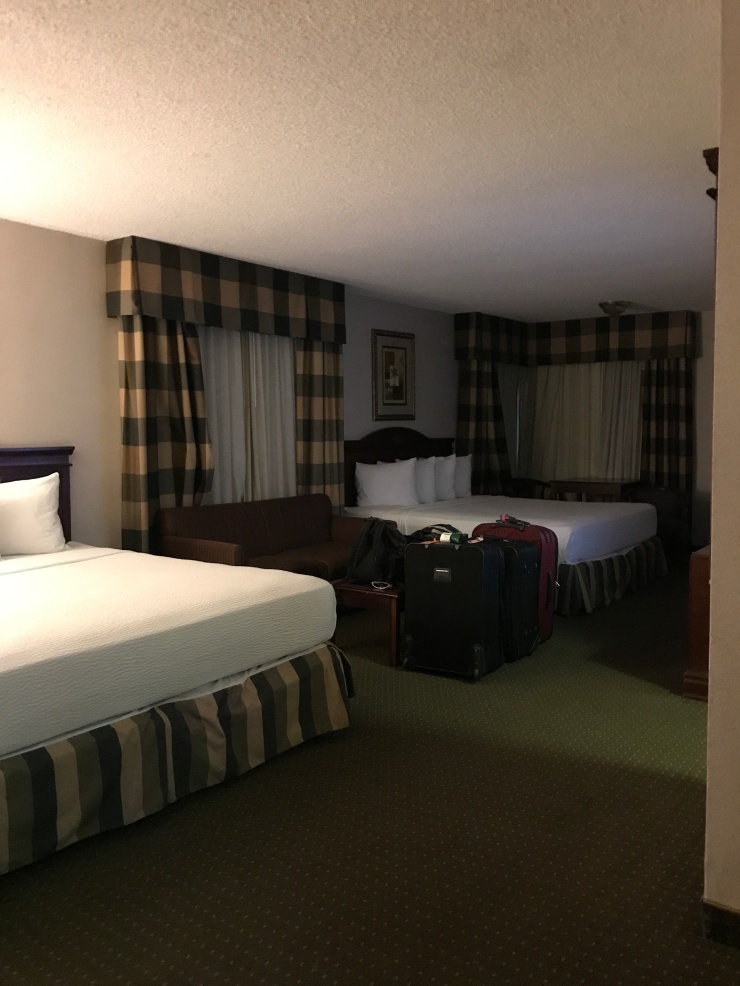 We thought it would be close to Universal Studios…it was not! We still had to use UBER to get to our destinations. The hotel wasn’t bad….it looks a little retro and could use some renos. It was clean and comfortable and we decided to move to a bigger room for an added cost.  Next time I will stay right in or around Hollywood…much more central. Try the Hollywood Celebrity Hotel if you want a cheaper option.

Check out some of these famous hotels(or stay in them!) –

The Hollywood Roosevelt – the oldest hotel in Los Angeles. Many celebrities have stayed here, and it is said to be haunted.

Chateau Marmont – a historical and cultural landmark, this hotel is where John Belushi died in 1982.

The Beverly Hills Hotel – all kinds of movie stars and rock stars have stayed at this world famous hotel. It was the inspiration for the song Hotel California. It’s also said to be haunted.

Hollywood…so much action and history in this area. We enjoyed just walking up and down the street, taking in the crazy all around us. 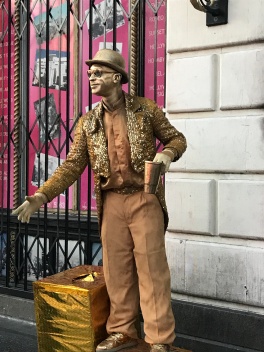 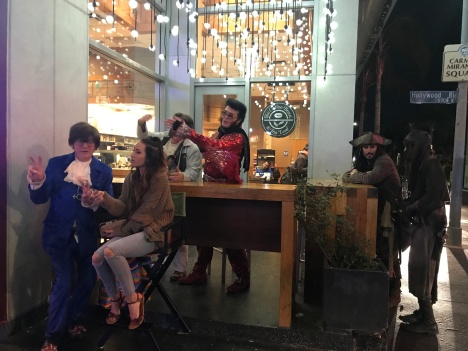 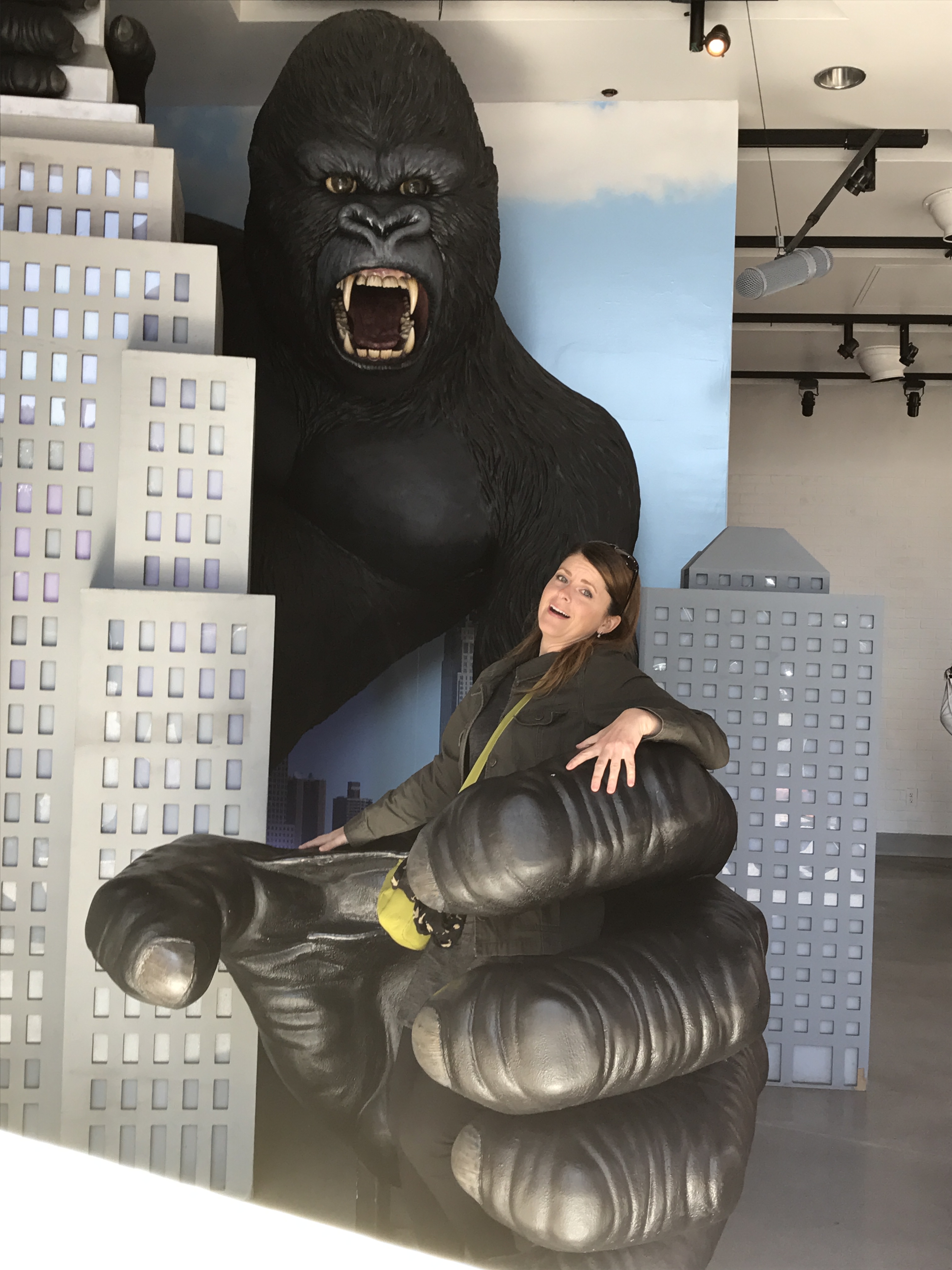 There are tons of fun shops and restaurants, street performers, people dressed up in costumes who will pose for photos. It’s hard to watch where you’re going when you are trying to check out the stars on the Hollywood Walk of Fame. 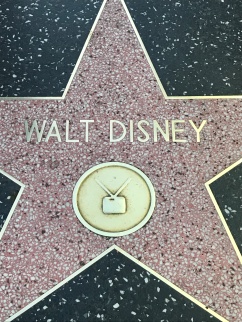 Hollywood sign – you can see it from the viewing bridge at The Hollywood and Highland Center Mall.

Or you can take a short hike up the hill to see it up close. The sign stands 45 feet tall and was first built in the 1920’s. I love flying into Los Angeles and being able to see the Hollywood sign from the air. So cool.

Dolby Theatre – home of the Oscars. You can take a tour inside the theatre, or just explore the outside. Pretend you’re a star and climb the steps leading to the theatre…pose for that red carpet shot!

When we visited, the Oscars were coming up so they were starting to block off the streets and put up risers and glitter at the theatre.

It was neat watching the Oscars afterwards to see how it looks so different on TV.

Graumann’s Chinese Theatre – this is where you’ll find the handprints and footprints of your fave celebs. 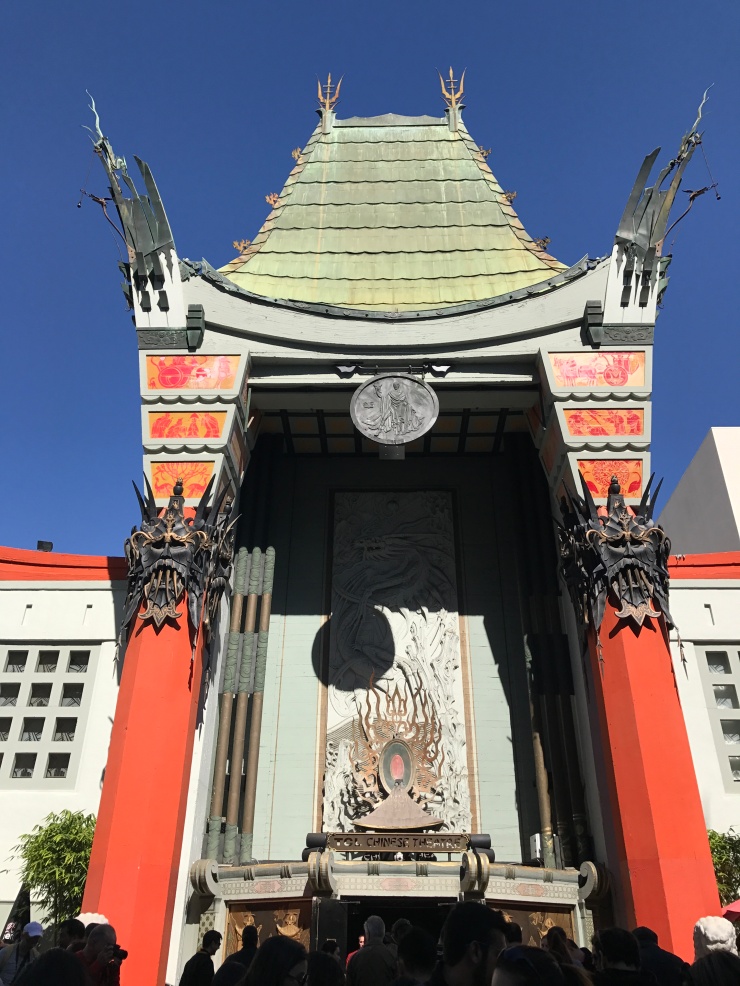 This is an older place with limited space, so a lot of the impressions are from older celebrities. The theatre opened in 1927, and is the spot for many movie premieres.  It’s always pretty busy here, so getting good photos is tough. 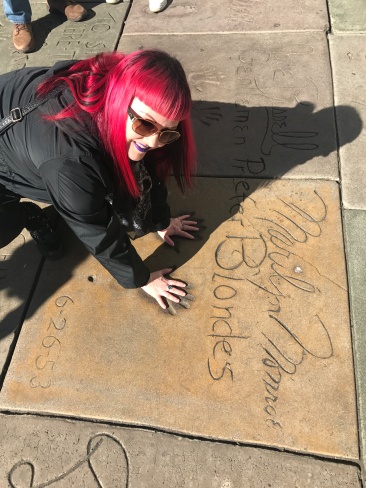 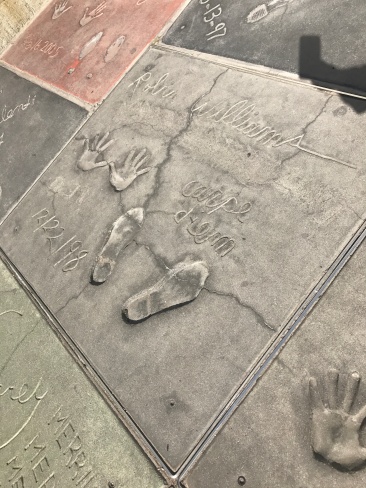 Universal Studios – we spent one full day here. If you go during the week in the slow seasons(winter), one day is enough time to see everything and ride most rides twice(I did!). Check out my blog about how to spend a full day at Universal. 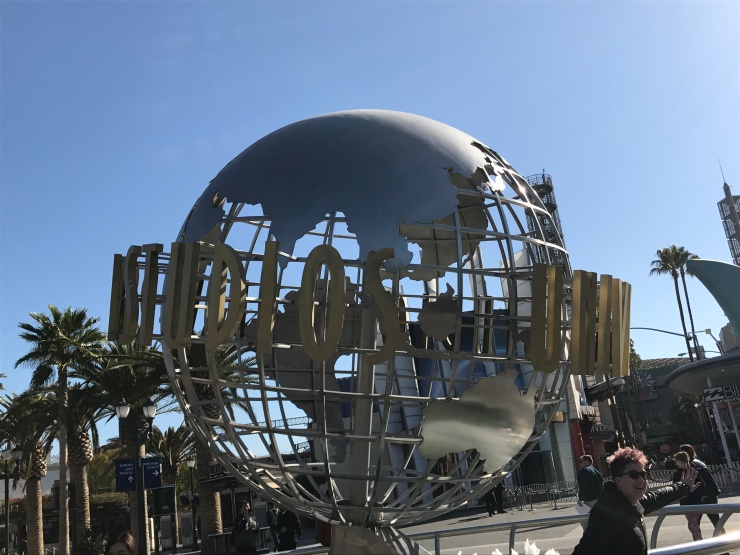 Griffith Observatory– for views of the city and the Hollywood sign. This place was featured in the movie La La Land. Here you can also visit the Samuel Oschin Planetarium.

Explore the Sunset Strip(Sunset Boulevard)..shop, eat, be seen…if you’re around in the evening, you may spot a few celebrities.  This is where you’ll find the iconic clubs Whiskey a Go Go, The Viper Room, The Roxy.

I would have LOVED to check out one of these clubs, but we were staying too far away for me to get home safely and cheaply.

Comedy Store.. on the Sunset Strip. I found last minute tickets for the Sunday night.. it’s an intimate venue to see top comics. We really lucked out and got to see Marc Maron, Whitney Cummings, Jeff Ross, Ali Wong and Brody Stevens(RIP). And the tickets are reasonably priced! You should definitely check out a comedy club while you’re in LA…another option on Sunset is the Laugh Factory.

Check out Urban Light at the Los Angeles County Museum of Art. It is a collection of restored street lights from the 1920’s and 30’s that once lit the streets.

Beverly Hills – we got off the bus here. Wandered down Rodeo Drive, pretending like we could afford anything here…we weren’t fooling anyone.

Stopped at the Beverly Hills sign and fountain, and had lunch at Fat Burger. 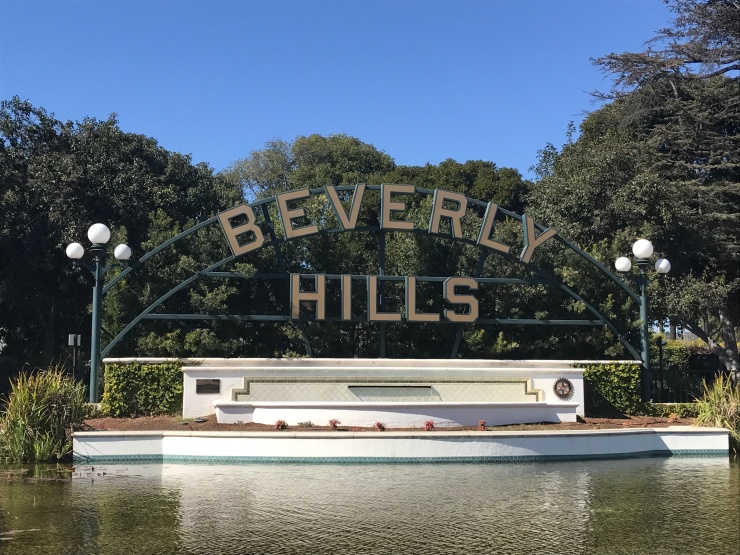 Santa Monica Pier – located along the beach. At the end of the pier is Pacific Park, an iconic amusement park with its famous Ferris Wheel.

Very pretty. Spent maybe an hour here. It is over 100 years old, and is popular with tourists and locals 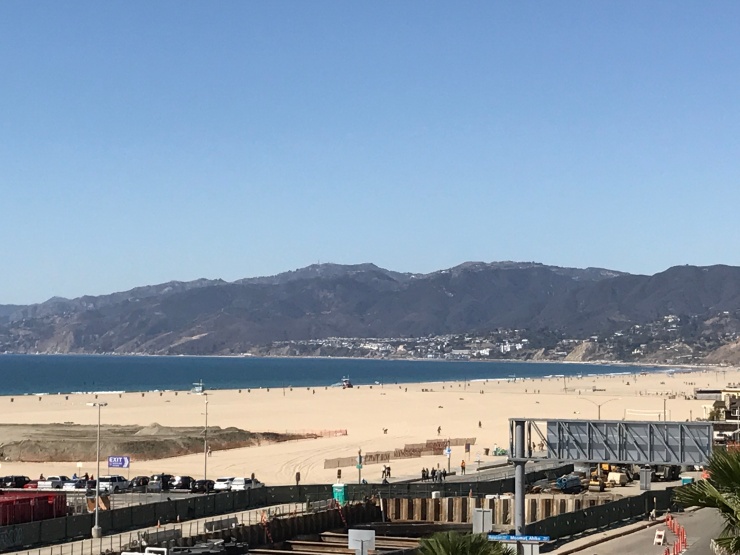 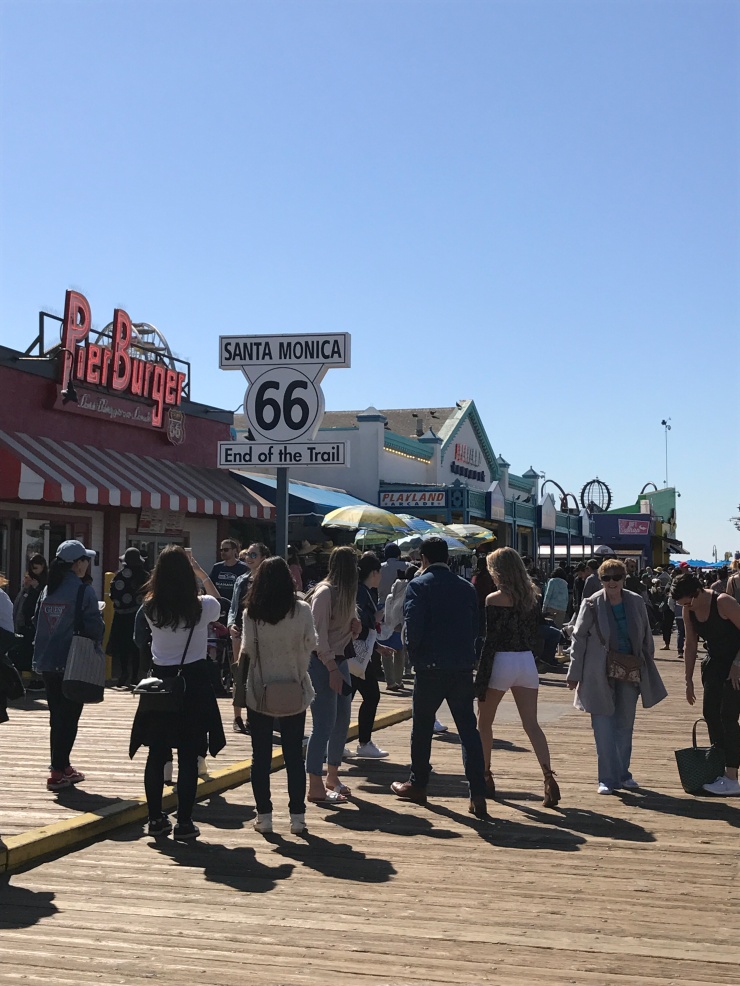 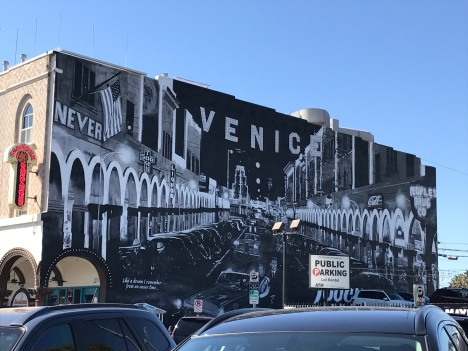 We took a walk along the beach , and stopped at the skate park where famous skateboarders practice their tricks. 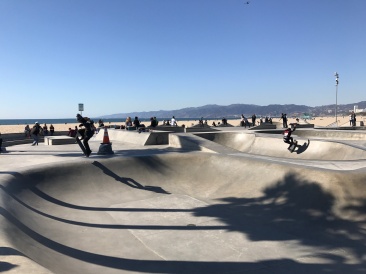 We had lunch at Larry’s – one of the few sit down restaurants in the area. The pizza was yum!

La Brea Tar Pits – the tar here has seeped up though the ground for tens of thousands of years and has preserved bones of animals that were trapped in the sticky substance.

Runyon Canyon Hike –  get in touch with nature, get some exercise and maybe spot a few celebrities!

Madam Tussaud’s Wax Museum – meet your favorite celebrities in wax form. I had been to the one in London, so we didn’t check it out this time. There is also the Hollywood Wax Museum. Same idea.

Museum of Broken Relationships – I visited the one in Croatia and it was awesome.. check it out if you have time. It features exhibits of items from broken relationships of all kinds…items are donated by everyday people like you and me!

Guitar Center’s RockWalk– you can buy a guitar here, or perhaps just have a look at the signatures and handprints found on the pedestrian path leading to the store.

See where your favorite stars are laid to rest at one of the cemeteries. The most popular ones are Hollywood Forever Cemetery , Holy Cross, Sunnyside. Visit on your own or as part of a tour.

There really are so many tours to choose from, so you need to decide what interests you the most. And some tours will combine a few attractions.  Try a Hollywood Walking Tour, Ghost or Haunted Tours or maybe even a crime/murder tour.

Attend taping of a show – We tried to get tickets to two tapings, but no luck. Some of the best ones to try are Ellen(good luck..lol), Jimmy Kimmel, The Late Late Show, Jeopardy, The Price is Right, Dancing With The Stars, and many sitcoms. Again, best of luck…it’s not easy to score these tickets.

In and Out Burger – we figured we had to try it out. We went to the one on Sunset…holy crap it was packed. Waited awhile for the food and managed to find a spot to eat outside. It was just crazy. The burger was OK; I was expecting something more spectacular.

Mel’s Drive In – one of the original drive in restaurants. There are a few locations around Los Angeles.

There are probably so many cool things to see and do that I’ve missed! Make sure to do your research before you go, so you don’t miss out on anything.