Located right across from Disneyland, there is a whole other park to explore! I found it to be a more relaxed park; not as crowded with way less kids running around. It is connected to Disneyland with its characters and themes but has a large emphasis on Pixar films and some Marvel characters.  I loved being able to jump between parks with The Park Hopper Pass. If you don’t have this pass, then you must choose which park you want to be in for the entire day; there is no flexibility. There are some great deals out there for Canadians but be aware…these deals are not always for Park Hopper passes.

And the best part of California Adventure Park? You can buy alcohol and walk around the park with your drink in hand! But don’t forget to bring your passport, or your mom will have to buy you that beer (who wants to carry their passport around Disneyland? Not me, but luckily she had hers). They don’t accept a drivers license as proper ID!

Also see my blogs about Disneyland, for some basic info about navigating the parks.

I’ll take you through a day at the Park and the 8 different “lands” – what to see and do, where to eat, what to ride (all of them, of course!)

This is where the action happens, and your adventure begins! It’s meant to resemble 1920’s Los Angeles. You’ll find a few restaurants, most of the souvenir shops and lots of shows. Be careful of The Red Car Trolley (on which you can take a short ride) – a few times I wasn’t paying attention and almost got run over. The best show here is the Red Car Trolley News Boys…with special guest star Mickey Mouse! Throughout the day there are various live music performances. This is also a great place to meet some characters…it is where I finally found Donald Duck (wearing a cute vintage sports uniform). 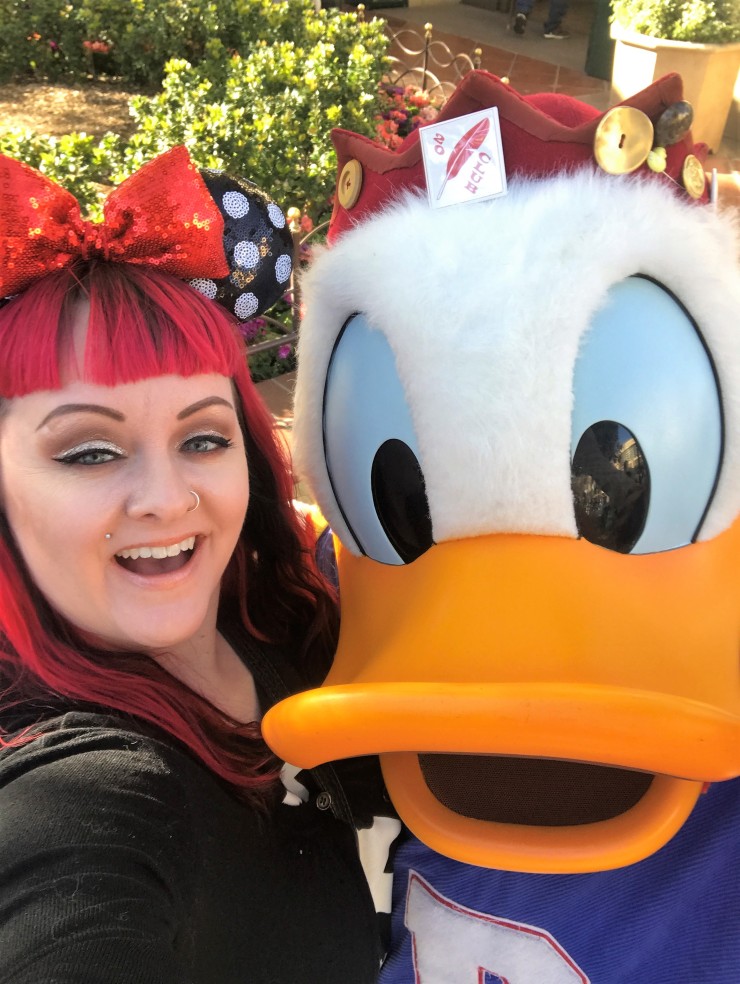 Made to resemble 1930’s Golden Age of Hollywood; it even features a backlot of a typical Hollywood studio. There’s even more action happening here! Restaurants and shops, and many cool characters to meet.  This is where you’ll find Captain America, Spiderman, Thor and Black Panther. I saw the last two. If you need to find just ONE place to eat in Hollywood Land, try Award Wieners. Not only is the name fantastic but the hot dogs are great. 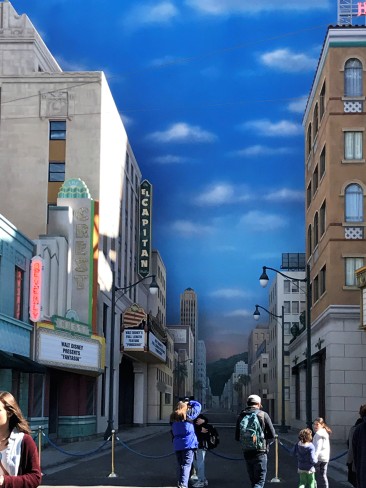 There are some attractions here that are geared towards kids that we didn’t bother with, such as Animation Academy, Sorcerer’s Workshop and Disney Junior Dance Party (I know, that one sounds tempting).

We did take an hour out of our day to catch Frozen Live at the Hyperion Theatre. If you love the movie, you’ll love this live action musical.  The puppets of Olaf and Sven are really cute too, and the cast is perfect.

I know that people bring children of all ages to the Park, but do you really think a baby is going to be comfortable and quiet sitting in a scary dark theatre for an hour? NO. Parents, please have someone “take one for the team” and take the baby somewhere else for an hour so we can enjoy the show without screaming and crying. Thanks!

Now, I’m brave when it comes to rides, but I just couldn’t do this one. First, there is no single rider line, so the wait time was usually close to 60 minutes.  Second, it’s a drop ride in the dark. There are 6 different versions, with different drop sequences. With my luck I would have been on the version that has the largest drop. Haha. Maybe next time.

Monsters Inc Mike and Sully to the Rescue – I enjoyed this one. You hop into a taxi and ride through Monstropolis — a human child has infiltrated the city (like in the movie.) It’s a cute and easy ride for all ages and fear levels.

I LOVED this area. Made to look like the town of Radiator Springs, it has a few rides and a cool restaurant called Flo’s V8 café.

A few times we saw the character Mater chugging down the replica street of Route 66. Awesome!

Radiator Springs Racers – by far THE best ride in the Park. There is a single rider line, but I think there were some technical issues because it was slow moving .I waited over an hour.  Hop into the 6-person vehicle and take a quick ride through the town. Then it’s time for the race…you head into one of two shops for your briefing and then it’s 3-2-1…GO! So much fun.

Luigi’s Rollickin’ Roadsters – Enter through Luigi’s Casa Della Tires. We waited too long for this mediocre ride. But the music they play on the ride is so catchy and fun; even though you hear the same song repeatedly while you wait you can’t help but sing along every time. When it’s finally your turn, you jump into a car(can fit 3 but it’s a tight squeeze) and then it moves around and spins in a giant Cars dance party.

All about nature and made to resemble a California National Park.  Look for a giant mountain in the shape of a grizzly bear.  Not the most exciting area of the Park, but there are a couple of cool rides

Soarin’ Around the World – a motion simulator ride that thrusts you in front of a massive screen to make it seem like you are flying over the world, complete with scents and gusts of air for that “wind effect”. My sister had a mini panic attack before this one, but we convinced her to stay on the ride and just close her eyes if it was too much. Haha it was fun to be park adventuring with two people who are particular about rides. This journey takes you through all of the continents, and famous landmarks. Super fun!

Grizzly River Run – Hey,  a water ride is great when you need to cool off in the hot California summer. It’s a bit trickier when you’re on the ride in the colder months. Another single rider setup – Yay! Some guy leaving the ride handed me a rain smock, so I figure I’m good to go. Nothing too crazy—hop into a raft that spins and drops down waterfalls. What I wish I would have known—put my feet up on the bar in the middle of the raft. Not doing that resulted in my boots getting completely soaked…and I had damp feet for the rest of the day.

Redwood Creek Challenge Trail – we didn’t know much about this one and decided to skip it.

This is the perfect area to meet Pluto; he was there a lot. It is also where the bears from Country Bear Jamboree hang out…. I had the pleasure of meeting the goofy/creepy one named Wendell. Chip and Dale and characters from Zootopia are known to be here too.

When you get hungry, head over here. There are so many options for food and drink that it was hard to choose. If you can snag a table, it’s a great place to sit and relax and take in the atmosphere.  We chose the Pacific Wharf Café, and I had the clam chowder in the famous Boudin bread bowl. It was amazing. If you have time, you can also take a tour of the Boudin Bakery. For a treat later in the day, we headed back to the Ghirardelli Soda Fountain and Chocolate shop…their ice cream is to die for, and the sea salt caramel hot cocoa is divine.

This area has changed a bit over the last year with the expansion of Pixar Pier. The original idea was to make it resemble Santa Monica Pier. There is a large manmade lake in the center, where the show World of Color takes place every night. The show has 1200 musical water fountains, lights, fire, lasers and fog. Cartoons are projected onto mist screens. Get ready to sing along to all your favorite Disney songs!

Goofy’s Sky School – a steel wild mouse roller coaster. Lots of sharp turn to make it feel like the car is going right off the tracks, and a few awesome drops. Nothing too crazy, but fun. Single rider line allowed me to ride this one twice in half hour.

Silly Symphony Swings – a short and sweet ride. The music played during the ride is from a Disney short film called The Band Concert. If you want to be silly dizzy for a half hour after, this ride is for you! I thought I could handle it, but it was rough.

Jumpin’ Jellyfish – I debated going on this ride, but the lineup was long and it seemed a little juvenile.

Golden Zephyr – I wanted to go on this one, but it was shut down frequently because it cannot operate in constant wind speeds or large gusts of wind.

Ariel’s Undersea Adventure – fun for everyone. Hop into a clamshell and take a magical journey through the story of the Little Mermaid.

A rethemed part of the original Paradise Pier. Here you can see many of your favorite Pixar characters such as Woody and Jessie from Toy Story, and the Incredibles family.

Incredicoaster– this one was shut down when we were there…too bad, looks like a cool roller coaster. It was being redone with a theme from The Incredibles. It is now open as of mid 2018.

Pixar Pal A Around – formerly Mickey’s Fun Wheel, it’s a massive Ferris wheel with some of the gondolas on a rail so they slide inward and outward as the wheel rotates. OMG no thanks. Luckily, you can ride on a stable gondola if you wish. This was closed when we were there and reopened mid 2018. I don’t think I would have braved this one though. Fun Fact: they offer motion sickness bags because of its intensity.

Toy Story Midway Mania! – there was a pretty long line up for this one, so we weren’t sure if we wanted to wait. I went and asked one of the attendants if it was worth the wait…. he said of course and asked how many people. He then put us through the fast track line; 10 minute wait as opposed to an hour! Fun tip: don’t be shy to ask the staff any questions you may have (or flirt a little?) …you never know, they just might do something cool for you!

The ride is a competition – put on your 3D glasses and play a bunch of simulated midway games on the screen in front of you. I didn’t realize it was a competition until the first couple of game screens, and then I went mental because I’m super competitive Hahaha.

I’m not a huge foodie, plus trying everything in the park can get hard on the wallet. Aside from what we ate, here are a few more options that sound cool:

Mac and Cheese cone – in a bread cone topped with bacon. Need I say more?

Adorable Snowman Frosted Treats – the only place where it’s ok to eat the yellow snow. The It’s snow capped lemon is like Dole Whip, but lemon.

Corn Dog Castle – in case the lineups are too long at Disneyland, try to get one here

Overall, California Adventure Park is amazing! For more blogs, check out the original Dazzling Disneyland and reviews of the other “lands” of Disney!