In 2018, I spent a full day at Universal Studios with my mom and sister. This was our last stop, after spending time in L.A and Disneyland.

There are different ticket packages but I would say that one day is enough, especially if you are visiting in the off season or on a weekday (we were there on a Monday in February).  There are 1 and 2-day admissions, The Universal Express (which gets you one-time express access to each ride/attraction/show), and the VIP Experience (this ticket is triple the cost of the other ones, but it gets you unlimited express access, plus an expert guided tour and a VIP meal).

We went in February, and the lineups were bearable…. a few times we got stuck in line for an hour. There are many single rider options that made it possible to ride twice in the day, not waiting for more than 15 minutes!

Universal is one of the oldest and most famous Hollywood studios that is still in use.  The park is split into two areas…the upper and lower lots. I found the easiest way to navigate the park was to do half of the upper lot first, make your way down to the lower lot (there isn’t as much down there), then finish the rest of the upper lot and try to squeeze in a show or two. If you’re there for the day it’s only realistic to catch one show, maybe two if you’re lucky so choose wisely!

We arrived as soon as the park opened at 9am (check their website for times), and made a beeline for The Wizarding World of Harry Potter.

After you enter the gates, stop for a pic with the Hogwarts Express train. 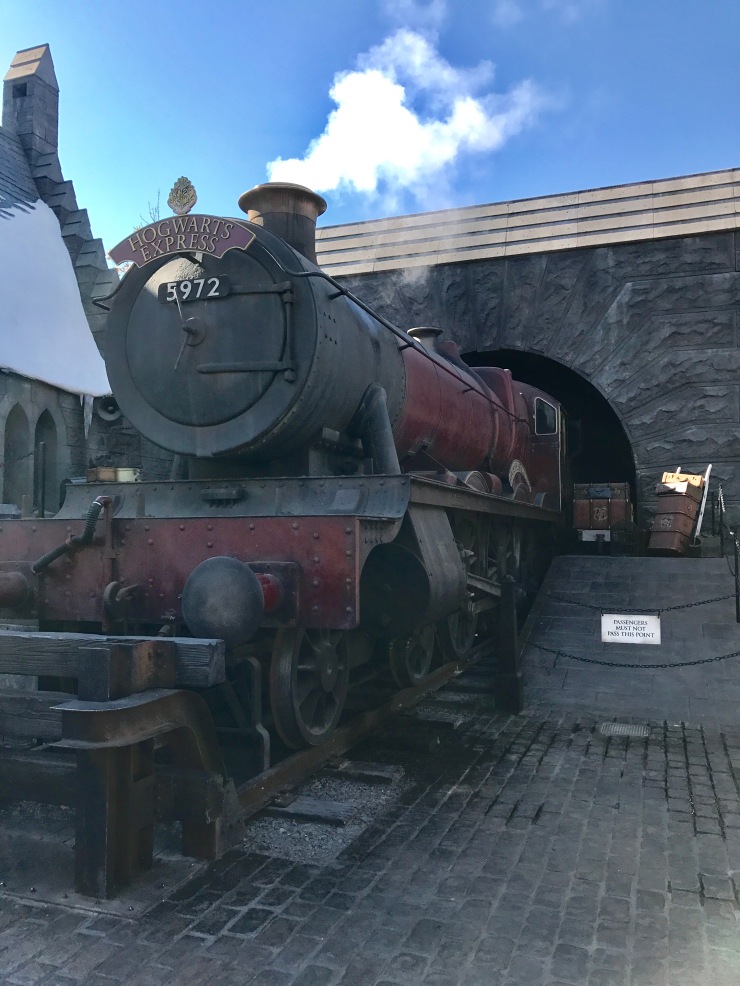 Make your way through Hogsmeade Village where you can go to Ollivander’s to pick your wand, or have a meal at The Three Broomsticks. 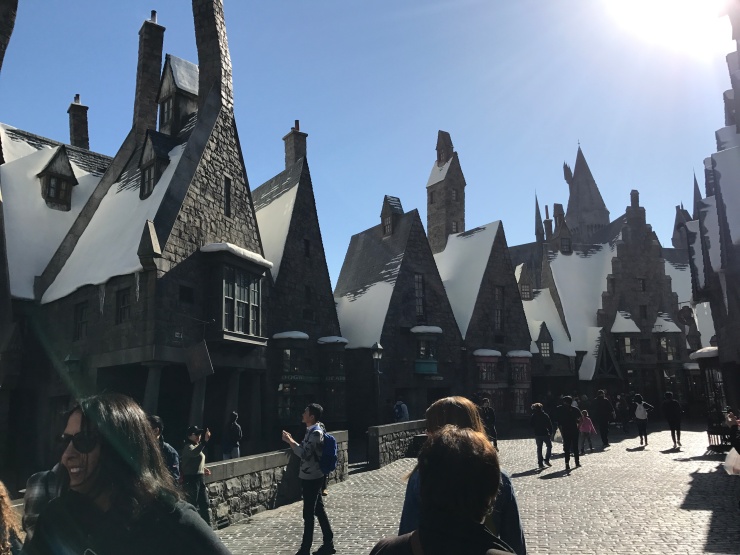 Or explore many of the other shops from the books/movies. Of course, we HAD to try butterbeer, and it was amazing!

The best way I can describe it…like a vanilla root beer? I would have loved to have more, but they are super pricey.

Harry Potter and the Forbidden Journey was my favorite ride in the entire park. I rode it back to back…yay single rider line!! Enter into the spectacular replica of Hogwarts Castle, and walk through the hallways of the school (with props/décor from the actual movies). 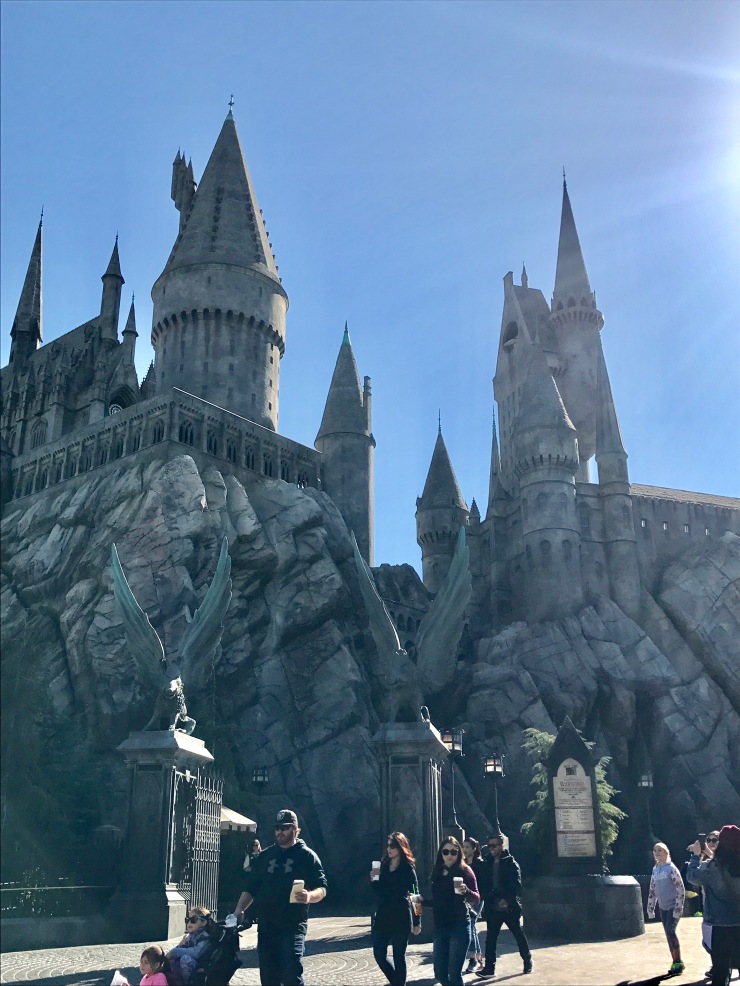 Hop into the enchanted bench and enter the world of Harry Potter. The ride is a mix of virtual reality screens and live effects/ animatronics. Enter the Forbidden Forest, escape the Dementors and play some quidditch. Fabulous!! There is another roller coaster here – Flight of the Hippogriff, but it was closed the day we were there. Throughout the day there is the Triwizard Spirit Rally, and the Frog Choir. If you are a fan of the books and movies you will LOVE this place!

Next, we made our way to the famous Studio Tour, which takes you by tram to the backlots and sets of films made here.  This tour takes 45 min to an hour. TIP: make sure you go pee before getting on that tram. Otherwise you will have to sit in agony, or have the guide make an emergency stop to have someone pick you up in a truck to take you to the nearest bathroom on the lot. Yes, that was me. It must have been the butterbeer…I could NOT hold it in. But I convinced the driver to find my tram again so I could rejoin the tour with my mom and sis. Some of the parts are a little outdated, like Jaws and the house from Psycho. Pass through Whoville, the flash flood area, War of the Worlds set (with the plane wreckage), Wisteria Lane. 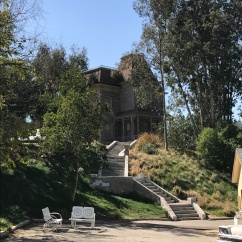 I missed the King Kong experience (that’s when I had to pee), but caught the Fast and the Furious Supercharged experience, a 3D car chase. The earthquake portion of the tour was closed that day.

Then it was time to explore Springfield, the town from the Simpsons. 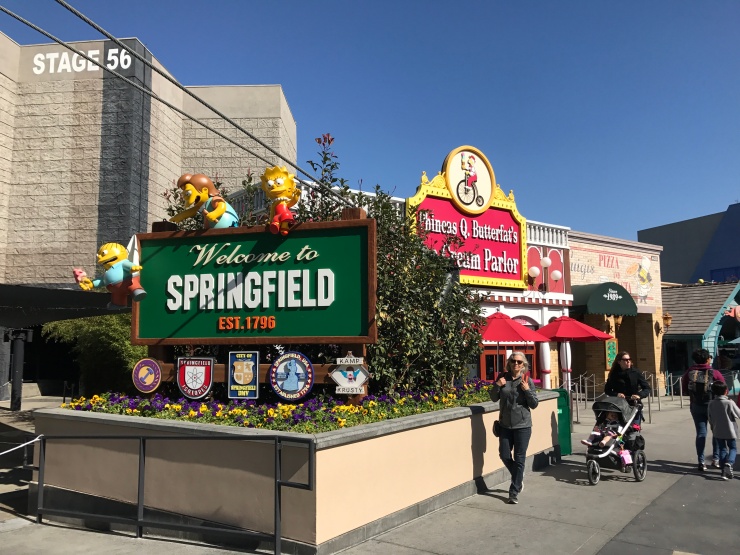 This area is so damn cute! There is only one ride here – The Simpsons Ride…. with a horrific one hour wait time (by myself.) 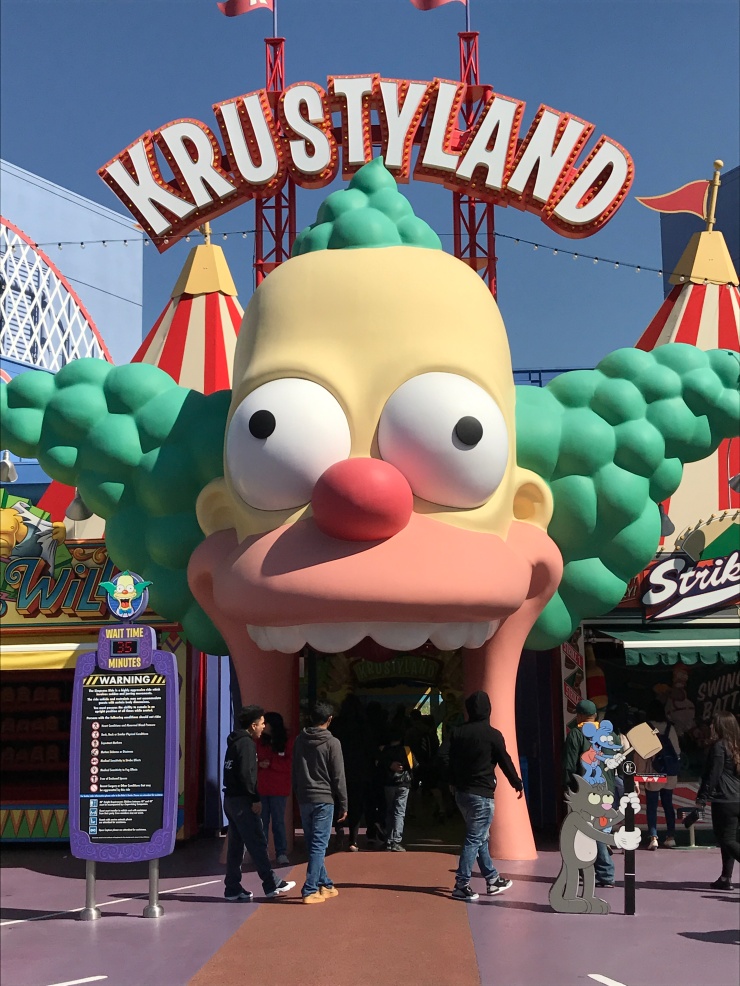 Luckily the storyline starts while you are in the queue so it’s somewhat entertaining. It is a virtual reality ride that takes you to Krustyland, the amusement park built by Krusty himself. Sideshow Bob takes over and terrorizes the park. And the adventure begins!

After the ride, pop into the Kwik-E-Mart to pick up some Springfield souvenirs. You can have lunch at Krusty Burger or Moe’s Tavern, or enjoy a beer at Duff’s Brewery. 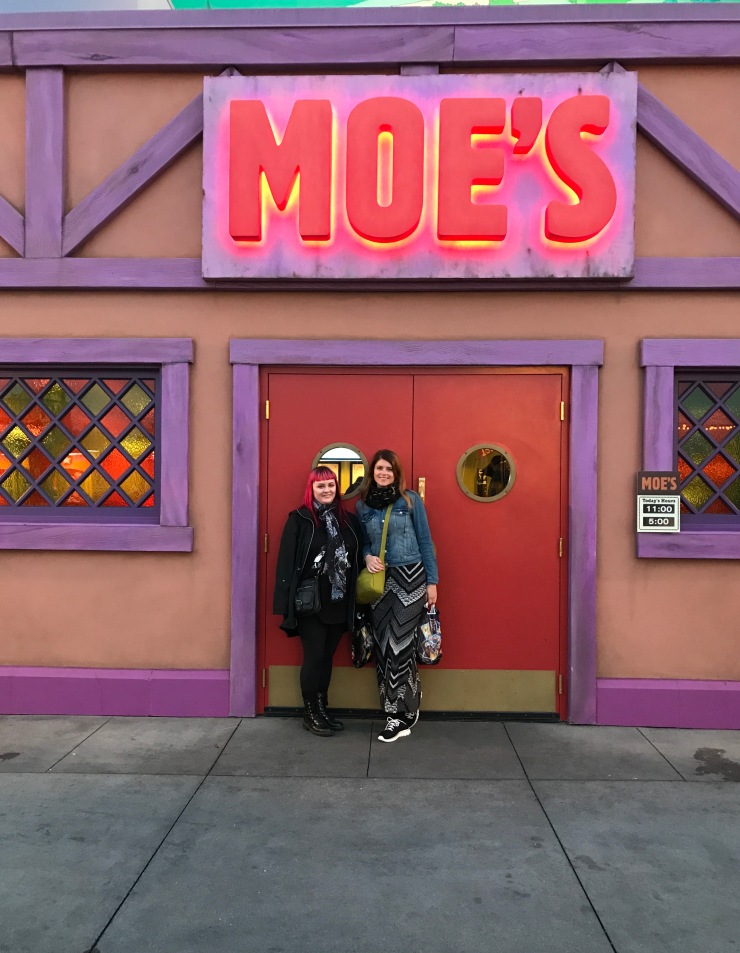 Springfield has the most options for dining in the park, so this is where we had our lunch. And you’re pretty much guaranteed to meet some of your favorite Simpsons characters here…the entire Simpsons family and Krusty the Clown(he loved my hair!) 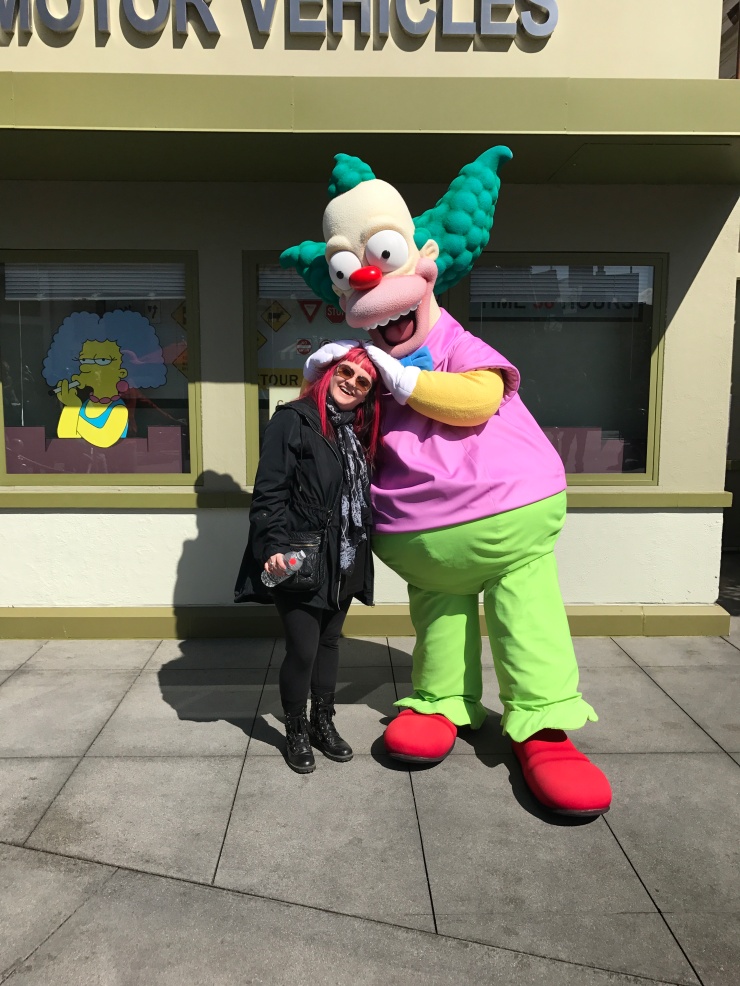 The Upper Lot also has the Streets of Paris and a New York street scene. These are great areas to see some of your favorite characters, as well as along the walkways from the entrance. We saw Frankenstein, Shrek and Donkey, Alex and Julien from Madagascar. 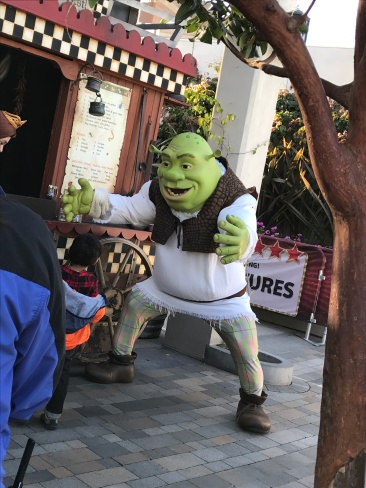 My FAVORITE was Beetlejuice…he was so spot on and funny!

Other ones you can spot are Dracula, Marilyn Monroe, SpongeBob, Scooby Doo and Shaggy…and many more!

Now it’s time to explore the lower lot. There are massive escalators that take you down…. the studio is built up on a hill, so the views of the city from up here are awesome. There are only 3 attractions in the lower lot and they all have the single rider option. So, we didn’t need to spend more than an hour or two here. I still rode each of the three twice!

Transformers: The Ride 3D – this one is super fun, even if you’re not all nerdy about the movies (like me). I also convinced my sister to go on this ride; she just closed her eyes when it got scary. You get on a motion platform vehicle and end up in front of 60-foot-high screens. It’s basically a chase, and a fight between the bots Optimus Prime and Megatron.  You can also do a meet/greet and photo op with Optimus Prime, Megatron and Bumblebee. 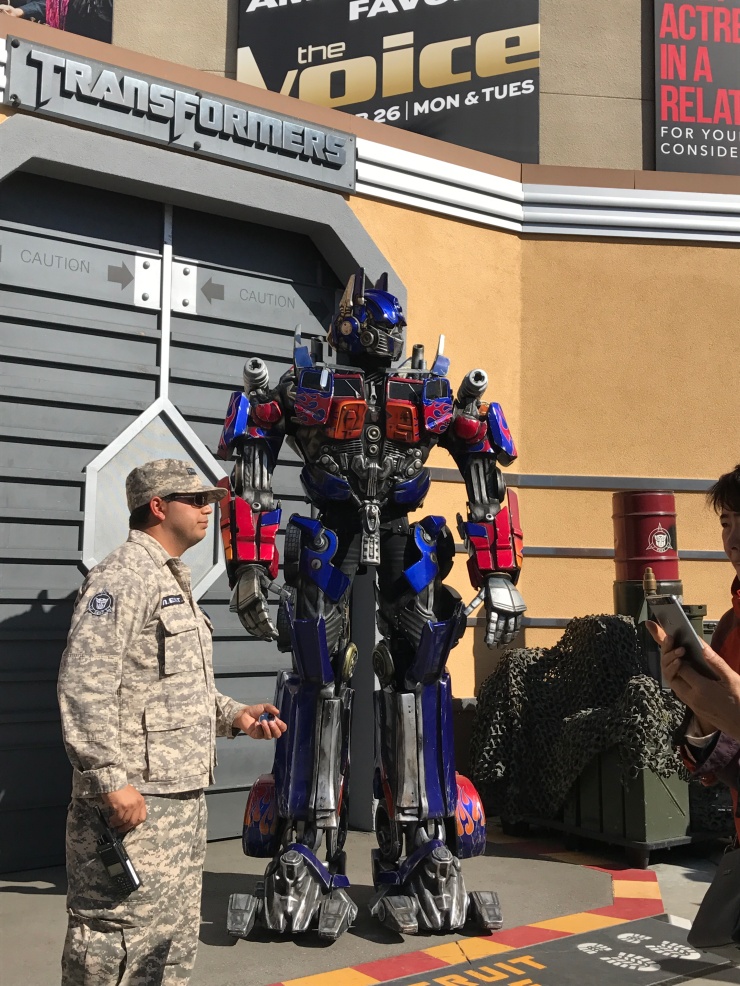 Revenge of The Mummy – a roller coaster with a ridiculously fast start…like it hits 60 km in a matter of seconds! Made my heart skip a beat…haha. It also goes backwards at one point, and twists and turns in the darkness. Fun Fact: many of the Egyptian hieroglyphs on the walls spell out real warnings. Now your soul belongs to me…FOREVER! Around the ride entrance, pose for a pic with the Mummy Guards…they’re on stilts so they’re huge.

Jurassic Park: The Ride – now this one is being redone, set to open in summer of 2019 and will be called Jurassic World: The Ride.  It is a water ride, and you float through a Jurassic lagoon with many dinos hanging out. Some might spray you with water! Then the dinosaurs act up, and all hell breaks loose. The ride ends with an 85 foot(yikes!) drop; expect to get wet if you sit near the front! Also check out the Raptor Encounter…. the handlers bring out the velociraptor…don’t get too close though…he’s easily agitated!

Head back up to the upper lot, and check out one of the shows.  The MUST-SEE show is

WaterWorld – 20 minutes, 4 times daily.  Based on the movie, it features live actors with tons of stunts and special effects. And a plane crash!  Non stop action! 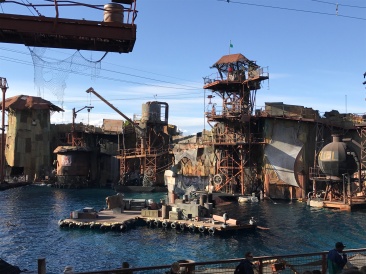 The first five rows are designated the “soak zone” ….and beware…you will absolutely get soaked. Like the “ushers” will purposely soak you with water guns, or perhaps just drop a full bucket of water over your head! No joke. We caught this show in the late afternoon.

We didn’t get a chance to do these other two shows:

Then walk on over to The Walking Dead attraction – me and my sis are big fans of the series, but we were a little hesitant to walk through a maze of zombies. Some are animatronics, some are actors. They get close, but they can’t actually touch you so that’s not so bad, right? I probably missed a lot of cool details because I was trying to get through there as fast as I could. Hahaha.

Then head over to Despicable Me Minion Mayhem – it’s a motion simulation ride, so put on your 3D glasses and get ready. This ride is frantic.  Gru wants you to be a part of his latest scheme, and he turns you into a minion! I convinced my mom and sister to go on this one, because you can close your eyes if it’s too intense. My mom had her eyes closed for most of the ride, but she regretted it later. The wait was long for this one, since there’s no single rider option.

Super Silly Fun Land – the carnival from the movie Despicable Me. It’s a wet and dry zoned play area, geared mostly for kids so we didn’t spend any time here. But in the heat of the summer, that wet play area must be fun! There is also the Silly Swirly Fun Ride, a basic spinning ride. Expect to see a few Minions wandering around posing for photos, as well as Gru and his family.

DreamWorks Theatre – Kung Fu Panda…this one was still being built when we were there. Opened June 2018. It is a motion simulator ride in a large theatre. Po and Tigress are the latest characters to be added for meet and greet.

After the Park closes head over to Universal City Walk, a centre of entertainment, dining and shopping. 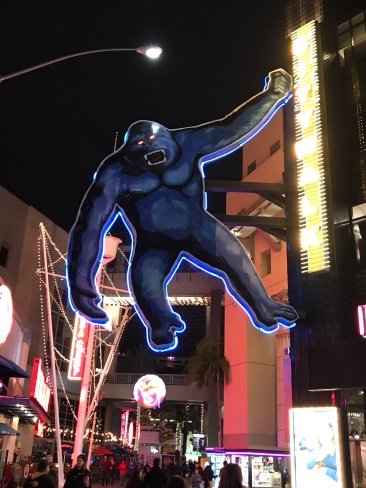 We came here after to have dinner and a look around. We ate at Camacho’s Cantina, which has since been closed permanently. Too bad, because we had some pretty tasty tacos for dinner. But no worries you can still check out other faves such as Bubba Gump Shrimp Company, Hard Rock Café, Margaritaville, and Johnny Rocket’s. If all you need is a snack, my fave options would be Pink’s Hot Dogs or Voodoo Donut. Voodoo has many unique flavors…so hard to choose! Something else that’s fun? Check out The IT’SUGAR candy store….it has every candy imaginable.

Are you exhausted? There you have it! The way to spend a perfect day at Universal Studios Hollywood!